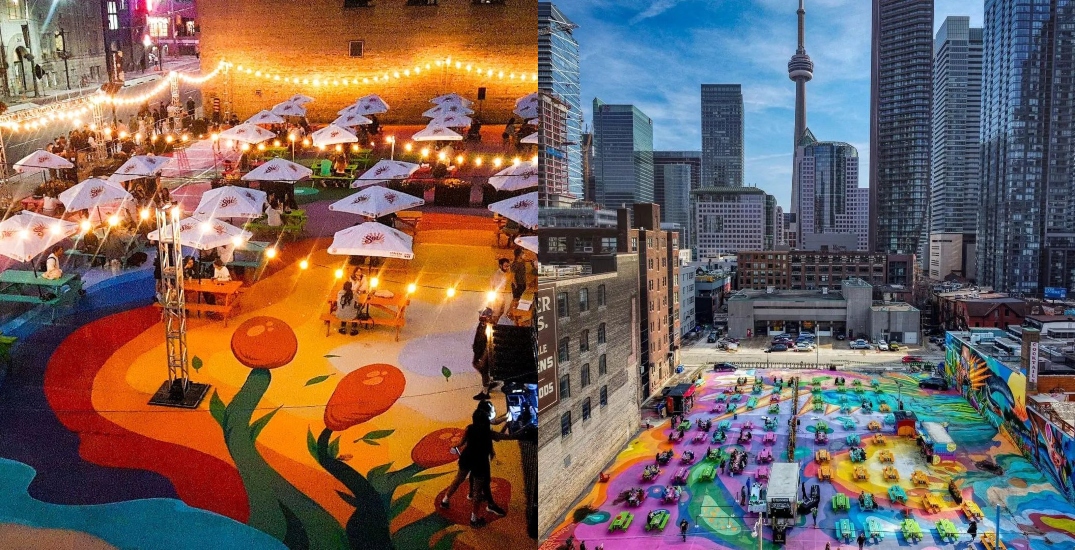 Signalling the beginning of Toronto’s patio season, RendezViews has just announced that it’s back for its third season. The beloved hangout opens on Thursday, May 5, kicking off Cinco de Mayo celebrations.

A joint venture between The Ballroom and Selva + Social Club, RendezViews opened in 2020 and quickly became synonymous with sunny days in the city.

The space was transformed from a drab grey parking lot to a colourful 30,000 square foot canvas. This season, keep an eye out for new murals like “Firing Strikes” by Bruno Smoky and “Nurture” by Shalak Attack.

Another thing to look forward to: the west side of the patio (presented by The Ballroom) has just added General Assembly pizza to the menu. The east side (presented by Selva + The Fifth Social Club) will continue to feature menu items like tom yum wings, beef brisket pizza, and khao soi chicken.

With cocktails on tap, a wide selection of beer, and a view of the CN Tower, it’s the best spot to watch the Toronto Blue Jays or the NHL playoffs. There’s a big lineup of art, culture, music, and special events that will be announced in the next few weeks.

“We remain committed to being a safe place for Torontonians and visitors to simply be and enjoy themselves in the heart of Canada’s best city,” said Barry Taylor, Director of Operations at The Ballroom.

We know where we’re hanging out this summer.