Not only was Toronto’s Pearson Airport recently recognized as one of top 10 best airports in North America, it’s just been named one of the top airports in the world to enjoy a layover.

And considering that layovers can often be a very stressful time for travellers, it’s good to know that certain airports can help improve a travellers’ happiness.

A new study from Bayut.com surveyed 932 international travellers who’ve had a layover between international flights in the past year.

The study found there are some travellers who actually look forward to their layovers.

According to Bayut, while only 16% of travellers said they enjoy layovers, the airport they have to spend their downtime between flights at can help raise their “feelings of contentment.”

From the findings, Tokyo’s Narita International Airport topped the list, with 78% of travellers saying they “mostly or greatly enjoyed their time between flights.”

Toronto’s Pearson Airport was the only Canadian airport to make the list, ranking 15th with 53.3% of travellers saying they enjoy their layovers there. 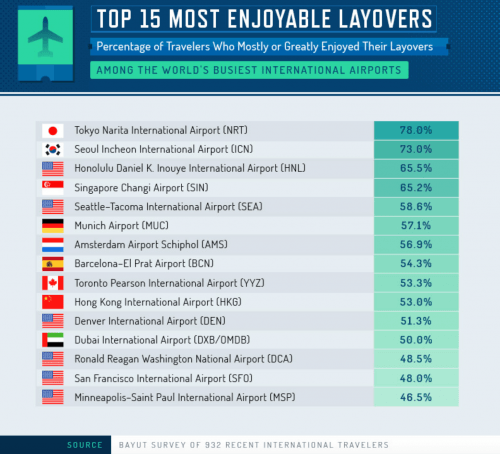 You can see the ranking of all 50 airports included in this study here.