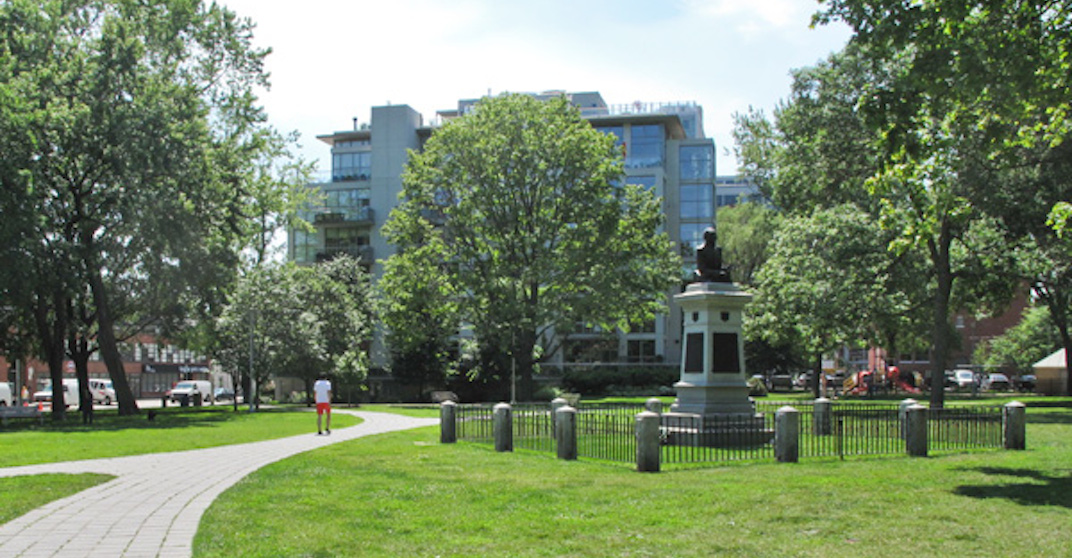 Tucked between bustling Bathurst and Front Streets is Victoria Memorial Square, a popular spot to take your dog for a walk, read a book, and hang out with friends. But what most people don’t know is the park is actually a cemetery — the oldest cemetery in Toronto, in fact.

The downtown park site was used as a burial ground for nearly seventy years, from 1794 to 1863, according to the Cultural Landscape Society. During that time, it saw hundreds of burials, including many soldiers from the War of 1812.

The first person to be buried at the cemetery was Lieutenant-Governor John Graves Simcoe’s infant daughter Katherine who was just one year old. Sadly, there are a number of other young Torontonians who were buried there as well.

The historic cemetery reached capacity in 1863 and was converted to a park in the 1880s. Its grave sites were levelled, paths were established, and the 17 surviving headstones gathered along the park’s western edge. A War of 1812 Monument was also erected in the centre of the park.

Today, there are still hundreds of bodies buried below the Toronto park grounds, and you can read a number of plaques, as well as the surviving gravestones themselves, to get more information on who was laid to rest in the city’s oldest cemetery.