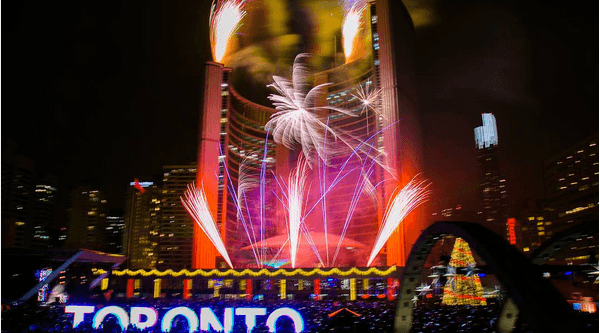 The program for New Year’s Eve at Nathan Phillips Square is as follows:

Live performance by Nefe, a rising Canadian talent that boasts “the soulful power of Tracey Chapman, the uniqueness of Bruno Mars and a voice that can silence a room.”

Live performance by Exco Levi & High Priest, a Jamaican-Canadian musician that “pays tribute to the founders of reggae music through a modern twist of poetry and sound.”

Headliners Walk Off the Earth take the stage

Countdown to 2017 and Fireworks.

The NYE festivities presented by the City of Toronto in partnership with the Province of Ontario and the Government of Canada, are also the official kick-off to Canada’s 150th birthday celeb – TO Canada with Love!