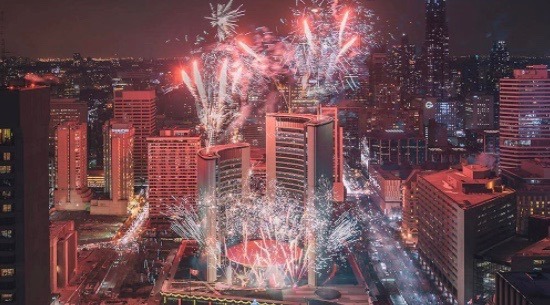 After a year filled with ups and downs, we’re looking for nothing more than to end 2016 on a positive note.

While Toronto’s biggest celebration will be taking place at Nathan Phillip’s Square, there are plenty of events taking place throughout the city if you don’t want to brave the cold or the crowds.

We’ve put together a New Year’s Eve roundup that includes all of the best parties, concerts, and events.

So don’t just settle for a night of Netflix, cheap wine and the company of your cat — a night of excitement and adventure in Toronto awaits!

What: Rub shoulders with some of Toronto’s elite as you dance the night away. The party kicks off at 9 pm and will include hors d’oeuvres, party favours, lobby bar and rooftop lounge access, entertainment and a midnight toast. There will be a dress code in effect so make sure you dress to impress.

NYE Under The Big Top

What: Ladies and gentlemen, The Drake Hotel is transforming for one night only into a magical circus big top. The night will be filled with good eats, live music and performances, and even a ‘strolling dinner’ that will feature an array of Drake favourites such as oysters, shrimp cocktail and grilled blue cheese and kimchi sandwiches, as well as circus favourites like cotton candy, Pogos and house-made pretzels.

What: 2016 has come and gone, which means it’s time to celebrate in style and with good music. Stones Place will transcend party-goers back in time as DJ Bush plays hit after hit of classic 50s, 60s, 70s and 80s rock, soul, and pop.

What: For those who want to give a big F-U to 2016, make sure to head to Toronto’s Track and Field for an epic night that will be filled with no regrets. This party features an RIP 2016 countdown, a complimentary daiquiri toast at midnight, a double DJ dance party, baller champagne giveaways, cocktails on tap, free bocce and free shuffleboard and, best of all, no dress code.

What: If you’re a Horseshoe Tavern regular, you’re sure to see some familiar faces at this annual New Year’s Eve soiree. Come ring in the new year with our the bar’s favourite Toronto alt-country band. Tickets are on sale now.

What: For those looking for an epic dance party that literally goes all night long, look no further than Shelter 325. Here you’ll find a variety of music and art and a percentage of all proceeds will be donated directly to Toronto food banks.

What: For one night only, Toronto’s Gladstone Hotel will transform into the exotic dreamland of the Moulin Rouge, complete with live music, burlesque performances, and a champagne toast at midnight.

What: This swanky lakeside gala is sure to be an event you won’t forget. Palais Royale overlooks Lake Ontario and has a ballroom which will host Klassik and Live Percussion by Soraya Lozano.

What: It’s time to get funky y’all, as Toronto’s Mill Street Brew Pub is transforming into a hip disco for one night only. Get ready to bump, hustle and shake to the funky sounds of DJ Humble, who will be spinning vinyl all night long. Enjoy a four-course dinner with beer pairings and a champagne toast at midnight. The best disco outfit can win a $100 gift card.

What: The famous Goin’ Steady DJs return to Toronto’s Garrison for an epic dance party that will take you back in time. You’ll hear pop and anti-pop hits from 1890 to 2017 played in chronological order.

Retro NYE With the Dreamboats

What: The Dreamboats are back for their second New Year’s Eve in a row at Junction City Music Hall, and they’re ready to rock n’ roll all the way into 2017. All the night long the band will be playing everyone’s favourite 50s & 60s classics. So grab your main squeeze and get ready to boogie.

What: Amsterdam Brewery will be transformed into a carnival-themed New Year’s event complete with DJs, acrobats, magicians, illusionists and other carnival performances. It’s a 14,000 square foot event space with a two-storey midnight balloon drop.

What: Put on your dancing shoes and get ready to go back in time for this hot NYE event. At Big Sound New Year’s you’ll be able to ring in the new year as you boogie the night away to a Soul and Motown orchestra.

What: If you’re looking to get dressed to the nines and to spend the evening at a big, fancy party, consider this extravagant ball at the Royal York. Taking place inside the Fairmont’s magnificent Concert Hall, Ball room, and Canadian Room, this event will leave you feeling like royalty – if only for just one night.

What: Put this year to rest and start fresh at the It’s Not U It’s Me party. There’ll be a variety of live performances to get you through the night.

What: 90s lovers rejoice: It’s time to take a walk down memory lane and get nostalgic as Back In The Day NYE will be paying tribute to Old School Hip Hop, R&B, Dance, House, Reggae, & Pop from the 90s.

What: Unleash your inner James Bond and enjoy an evening of casino-style fun, party favours, food, and plenty of cocktails.

What: This dance party encourages costumes, and the party’s hosts vow this will be bigger than its legendary Stranger Things party. Make sure to grab your tickets fast.

What: Don’t feel like hitting a bar but still want to ring in the new year with fellow Torontonians? Head to the heart of downtown Toronto and celebrate the New Year at Nathan Phillips Square. Guests can enjoy live music, skating, fireworks, and plenty of fun.

What: The theme for this epic NYE party is Secret Society. While $150 for a ticket might seem steep, it includes an open bar, snacks and dancing all night long at one of the classiest spots in town.

What: Enjoy an evening hosted by cabaret star Sharron Matthews as she sets the stage for a night filled with comedy, music, drinks and food, and even a few surprises.

What: There are few things more fun than an epic New Year’s Eve house party. Head to Toronto’s Dublin Calling and enjoy plenty of party punch, appetizers, a dance floor, and midnight bubbly.

What: Ring in the New Year as you pay tribute to the one and only David Bowie. There will be plenty of party favours and bubbly at midnight. And the best part? No cover.

What: Count down to the New Year with the whole family at DJ Skate Nights: A NYE Ice Skating Jam Named Saturdays, as DJ P-Plus serves up the hottest hits.

What: Coda cordially invites Torontonians for a (late) night filled with music and dancing that goes well into the morning, so make sure to wear your dancing shoes.