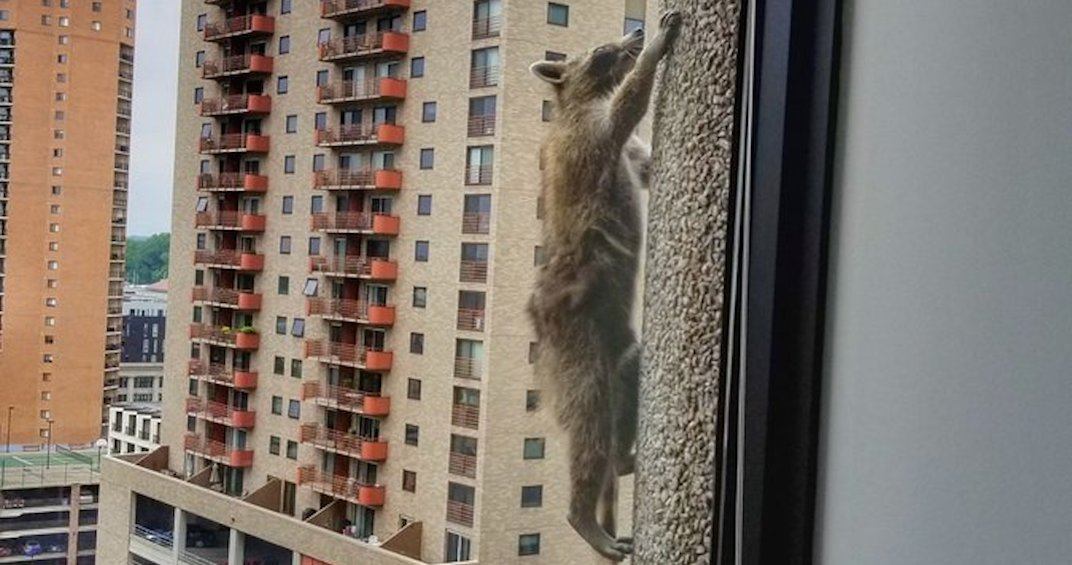 It’s a tale we’ve all heard before, a curious little raccoon has gotten itself into a very questionable situation.

Only this time it happened south of the border and not in Toronto.

On Tuesday, a furry little  Spiderman became the most talked about creature on social media after scaling a 25-floor building in St. Paul, Minnesota.

The curious trash panda first caught the attention of a local radio station who spotted the raccoon climbing up the side of the UBS Tower, and quickly after, both onlookers and the internet became obsessed with the raccoon’s progress.

My picture from the 13th floor around noon. Hope he makes it down OK! #mprraccoon pic.twitter.com/gfVWysn9iO

As the raccoon continued to climb, the public’s concern for the raccoon’s safety escalated, and the public began live-tweeting the entire spectacle.

By Tuesday afternoon, a maintenance crew attempted to rescue the animal, which, unfortunately, frightened the raccoon into crawling even higher up.

He is on the ledge on our floor. He seems to be doing well. We’ve been told that the building has live traps on the roof and are trying to get him to go up there. We all just have to keep our fingers crossed.. #mprraccoon pic.twitter.com/HY1PkuFKz0

Towards the end of the workday, the raccoon had managed to climb halfway up the office building, showing no sign of slowing down.

And we know what you’re thinking. Why didn’t someone just open a window and help the little guy out? None of the windows on the building actually open.

At around 5:30 pm, the St.Paul Fire Department arrived on the scene, but a local radio station said fire department officials judged that trying to rescue the raccoon from the ledge would be too great a risk to any firefighter who went up.

Can confirm #MPRraccoon is still itchy. Got a little visit from @StPaulFireDept too! Cat food awaits it on the roof. pic.twitter.com/WeOTWmbaqz

The raccoon’s adventurous climb began garnering serious attention, and the writer and director of the Guardians Of The Galaxy movie said he’d donate $1,000 to charity for the rescue of the raccoon.

I’ll donate a thousand bucks to the non political charity of choice to anyone who saves this raccoon. I can’t handle this. Poor dude. https://t.co/2F5reAKkKa

By nightfall, both the people of Minnesota and the internet were collectively holding their breath as the raccoon continued its climb, with many worried that the raccoon might plummet to its death.

He’s going down, brave #MPRraccoon now around 16th floor down from 23rd pic.twitter.com/WuFiQN0xq2

Good crowd on @mpr’s grassy knoll keeping an eye out for the #MPRaccoon pic.twitter.com/LdgWWP5xYL

But by early Wednesday, the little daredevil made it safely to the roof, where St. Paul Animal Control had placed cat food and a trap in hopes of enticing the animal to safety.

After a delicious meal of soft cat food, #mprraccoon has been caught and will be picked up by Wildlife Management. Goodbye friend! pic.twitter.com/twcBPpjOQk

The internet couldn’t be happier about the raccoon’s triumphant climb, which could have easily ended up like the Toronto raccoon that captured the heart’s of the entire city three years ago.

I hope #mprraccoon doesn’t end up like #TorontoRaccoon (i.e. dead). Although, if he DOES end up like Toronto Raccoon, I hope he gets the sweet street side memorial. pic.twitter.com/6rPdJJ5Ikb