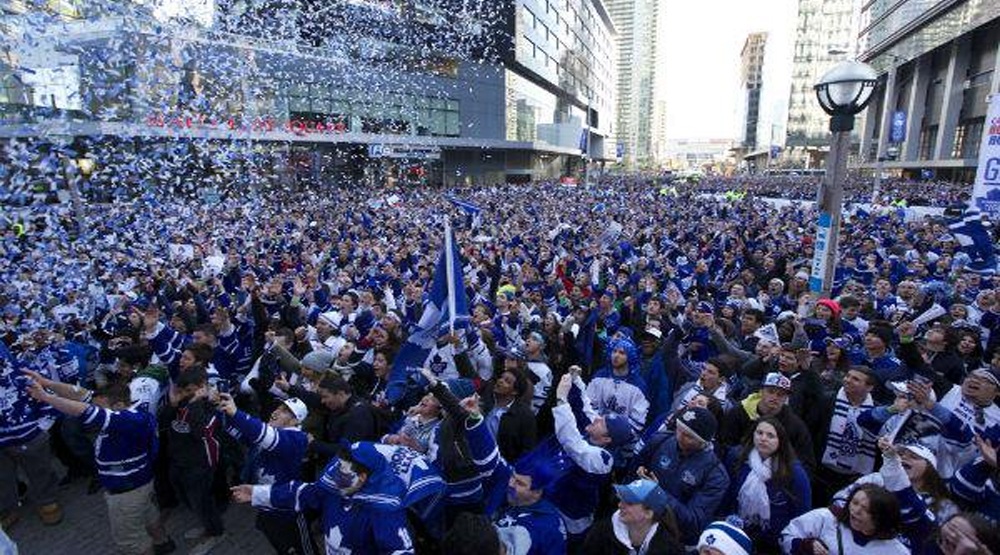 It’s going to be one hell of a night for Toronto sports fans.

And unless you have tickets to cheer on your favourite team, Maple Leaf Square is definitely  the place to be.

Both the Raptors and the Maple Leafs face important first-round playoff matchups and Maple Leaf Square is hosting a massive joint tailgate party to accommodate fans of both teams.

And to ensure TFC fans aren’t left out, the square will also be playing the Toronto FC in their CONCACAF Finals matchup against Chivas Guadalajara.

A big night in Maple Leaf Square and an even bigger tailgate.

A 3-game viewing party for the world’s greatest city.

With the Raptors hosting the Washington Wizards on home court for Game 5, the basketball game will be broadcast on the main screen outside the arena for fans.

Hockey fans can enjoy the Leafs Game 7 against the Boston Bruins on a number of screens that will be positioned at the end of Bremner Boulevard at York Street.

“This is a big night for the Maple Leafs, Raptors and TFC; for our fans and for our city,” said Nick Eaves, Chief Venues and Operations Officer at MLSE.

“This is a logistical challenge that we are thrilled to face and an experience that we are excited to deliver for our fans. As always, we are thankful to our partners at the City of Toronto and Toronto Police Service for their help delivering a safe and positive event for our fans to celebrate our teams and our city.”

There will be two separate entrances for the tailgate parties in the square, located at the southwest corner of Air Canada Centre and a second entrance located at York Street and Bremner Boulevard.

So if you don’t mind a little rain, head down to the square tonight. It opens up to fans at 5 pm.