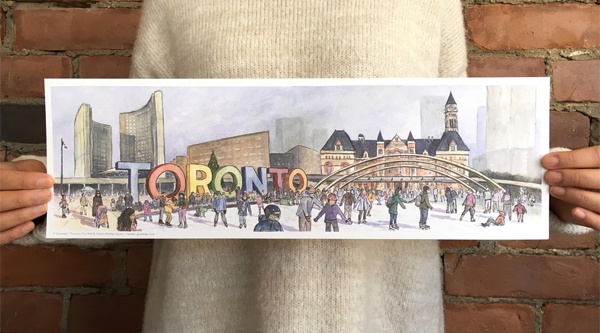 This was just going to be a fan post.

Simply because the work of Toronto-based illustrator Lichia Liu rightly deserves to be showcased.

Born in Taiwan, landed in Toronto at age seven, and later trained as an urban designer, Liu took to drawing as a way to relax after work. Her sketchbooks filled-up as she travelled extensively across Asia.

She’s been back in Toronto for four years now and still likes to draw on location. Her studio shop, GoTamago celebrates its grand opening in East York on October 29, but she’s already amassed a following selling prints online and as a stockist at Toronto retailers like The Spacing Store, Labour Of Love and Crywolf.

Her body of work, now for sale as a collection of prints, calendars and cards, is a culmination of sketches and paintings, many of them brimming with Toronto pride.

“I tend to draw places I have an attachment to. It’s not like typical landmarks on postcards… it’s a feeling, a gut reaction.” She tells me over the phone. She draws onsite and in that process, “there’s a spontaneity that’s captured that you can’t duplicate in the studio.”

105/366 the hardest parts are done! Time to leave the painting and go for a walk so I can come back with fresh eyes.

Her paintings are not about landmarks, but rather how people interact and occupy these iconic spaces.

“I’m there for hours absorbing the environment and conversations.”

I’ve been busy over the last few weeks with new paintings and prototypes. Here’s a sneak peek! #comingsoon #ooakdiaries #ooakdiaries16

This painting of Nathan Phillips Square for instance? She was sketching skaters in February 2016 when some guy got down on his knee to propose. She included the couple in the final version in the moment just before the proposal took place.

“Do they know they’re in the painting?” I ask.

The answer is no, but she’s sure the moment was captured on video too, “It was well planned… there was a videographer waiting on the side and someone came out with roses.”

Should the couple recognize themselves? Liu would love to send them a free print. 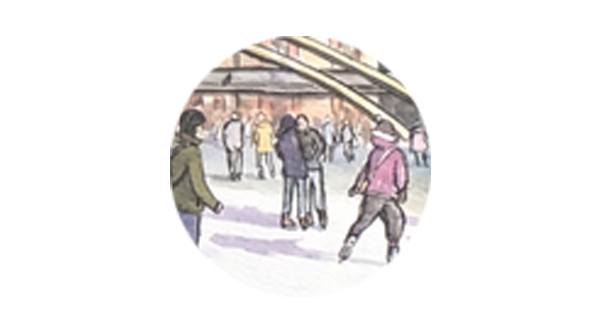 Here is one of my favourite outtakes from this morning’s quick and cold photoshoot with this handsome cutie. The new Toronto and New York skyline cards are now available at @iheartscout and @artsmarket! You can also find them on our website (link in profile).

Drumroll please… Both of our 2017 calendars are now available for pre-order online! For a limited time, pre-orders will also receive free shipping ✌️ Details here: 👉 bit.ly/Gotamago2017