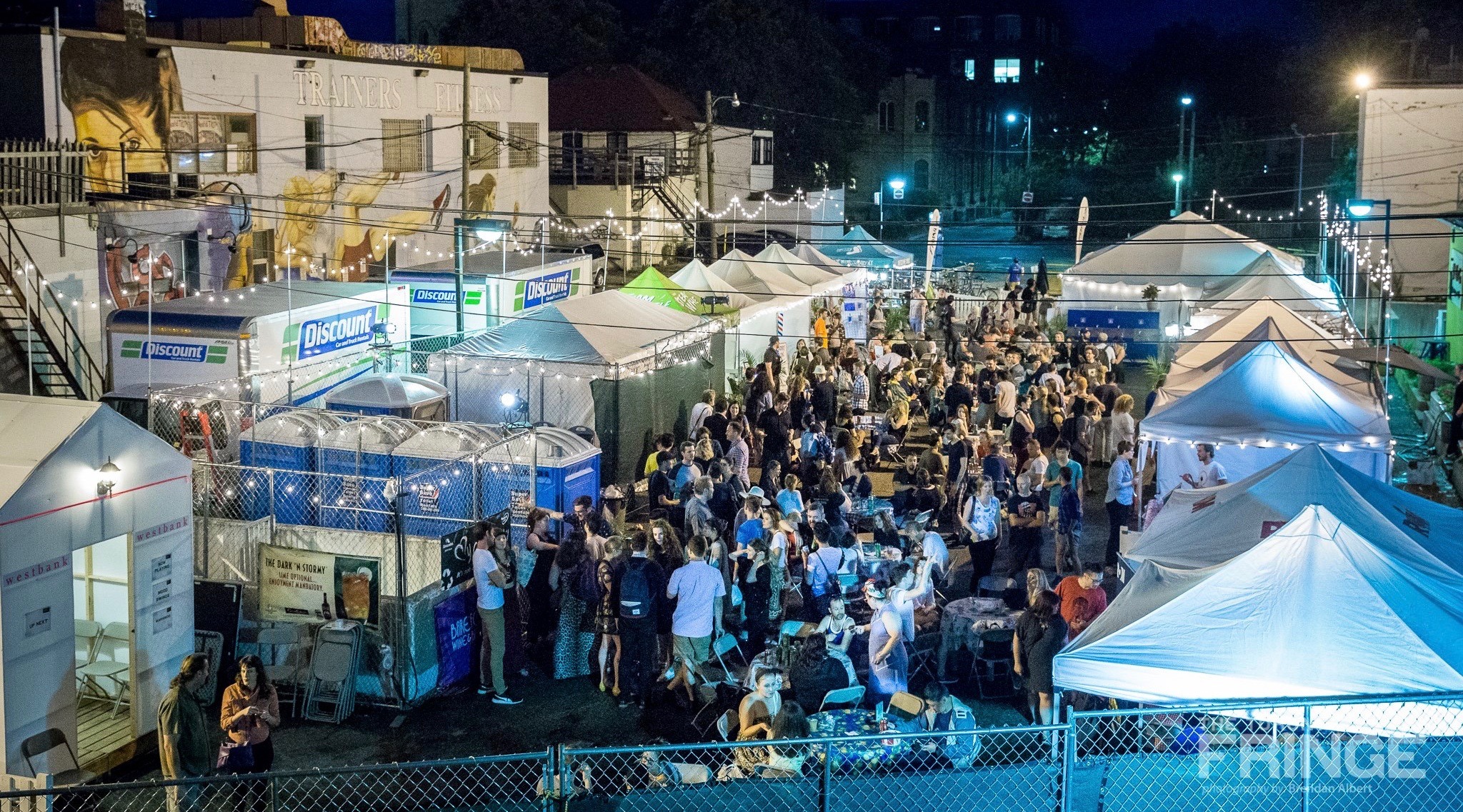 Live theatre, music, and art return this summer as part of the Toronto Fringe Festival.

The massive summer event has been entertaining the city for the past 29 years, and it’s now getting bigger and better. This year marks the Festival’s largest program ever, with new community partnerships, and a newly located Fringe Club.

Since the closing of Honest Ed’s, Toronto Fringe announced it would be moving from the alley down Bathurst Street to Scadding Court at Bathurst and Dundas. Centrally located near the four main Fringe venues (Factory Theatre, Tarragon, Theatre Passe Muraille, and the newly added Theatre Centre), organizers say the Scadding Court Community Centre is a natural partner for the festival due to its strong commitment to the arts, and dedication to community building activities.

In addition to all the entertainment, the Scadding Court Fringe Club will feature a new licensed Outdoor Stage venue in the outdoor rink. Fringe After Dark in the Fringe Tent returns, now re-named Neville’s Nook after long-time festival supporter Neville Austin, and the popular beer garden and patio that Fringers flock to during the festival.

Highlights from the Toronto Fringe Club’s lineup this year include:

Wednesday, July 5 at 5:30 pm:  Opening night party, Honestly Best Parade, walking together in a unifying spirit from Honest Ed’s to the new TORONTO FRINGE CLUB location at Scadding Court. Then TORONTO FRINGE CLUB will host the official opening celebrations on the outdoor stage with Fringe’s Executive Director Kelly Straughan and special guests, ushering in a new era of the Toronto Fringe.

Weekends – July 8 – 9, and July 14 – 15, from 12 – 5 pm: Every Fringe weekend, Live at the Fringe on the Outdoor Stage, will host afternoons filled with non-stop entertainment. Enjoy music, dance, jugglers, acrobats and more!

July 5 – July 15 at 8 pm: Neville Austin is sponsoring the nightly Fringe After Dark Tent at the TORONTO FRINGE CLUB. Fringe after Dark in Neville’s Nook will be a relaxing area to unleash the inner artist.

Monday, July 10 at 8 pm: The Annual Fringe Cabaret is back! Hosted by James Gangl, Fringe artists from past and present will dazzle spectators with entertaining, funny and risqué acts, anything goes.

Tuesday, July 11 at 7 pm: 70 years ago, the Fringe movement was born in Edinburgh, and on July 11 over 200 Fringe Festivals around the world are coming together to spread its importance, and this is the first time it coincides with the Toronto Fringe. TORONTO FRINGE CLUB will host the World Fringe Day Celebration with a live stream of the Birthday Party.

Tuesday, July 11 at 8:30 pm: YogaTree Flow in the 6ix is an open level yoga class, that is energetic and urban, with a carefully curated playlist of Toronto artists.

And these events are new additions this year.

Friday, July 14 at 8 pm: Get ready to laugh with the Yuk Yuk Stand Up Comedy on the outdoor stage, this hilarious show will be hosted by Keith Pedro, and featuring stand up by comedians Kyle Hickey, Christopher Davidson, and Adrienne Fish.

Sunday, July 16 at 11 am: Scadding Court will host a local food and arts market featuring a group of talented up and coming crafters, chefs, and bakers. The Fringe Open Air Market will feature diverse street food, local handcraft goods, and fresh produce.

Where: Various Venues
When: July 5 to 16