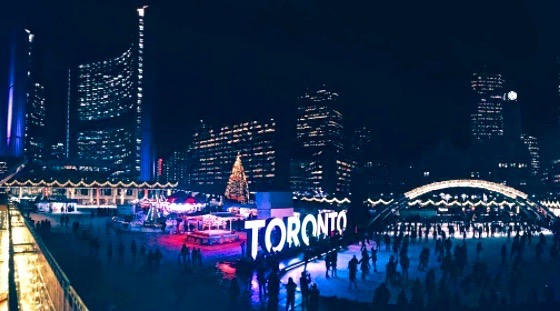 Holiday markets abound in the city of Toronto in 2016. Now the Brickworks have gotten in on the action with their holiday makers’ market. If you’re behind on holiday shopping, this is your chance to find some truly unique last-minute gifts for your friends and family. The event is delivered in partnership with Etsy Canada, so you know the crafts are going to be premium. Admission is free.

A Christmas Carol at Soulpepper Theatre

Bah Humbug! If you’re having a hard time getting into the holiday season, Soulpepper Theatre’s critically acclaimed production of A Christmas Carol is sure to get you there! An adaptation of Charles Dickens’ classic novel, the play tells the story of Ebenezer Scrooge, an elderly curmudgeon, who learns the meaning of the Christmas spirit. Book soon, because this play is one of the hottest tickets in town. Oh, and tickets start at $35 each.

Was your office holiday party not as lit as you hoped it would be? Never fear, because the Art Battle artists who work at The Great Hall want to include you in their fabulously hipster office holiday party! Make the journey to Queen West for a night of great music, innovative art, and cheese plates under the mistletoe. General admission is $20, but there’s a 50% student discount, and groups of 8-12 enter for just $120.

Grab the coolest kids you know, and take them to The Danforth Music Hall for a rock concert tailor-made for them! The Strumbellas are hosting an afternoon of child-friendly tunes that are sure to get your kids (and you) dancing in the aisles. This is a concert that really does sound like fun for the whole family. Tickets start at $15 each.

Sick of going to work before the sun is out and leaving after its already set? Well, why not celebrate The Winter Solstice with an annual parade in Kensington Market? The parade marks the shortest day of the year, as well as the imminent return of more daylight hours. Lantern sales start at 4 pm, and the parade departs from Oxford and Augusta at 7:00 pm. The event is free, so it doesn’t just celebrate the return of light outside, it’s light on your wallet too.

Where: Kensington Market at Oxford and Augusta

December 23rd is Christmas Eve Eve, and it is a magical day. To mark the occasion, venture downtown to celebrate the season with some sublime holiday music. The annual concert at City Hall is emceed by Breakfast Television presenter Adam Wylde. It features local choirs All The King’s Voices and the Toronto Beaches Children’s Chorus. It even includes a cameo from the man of the moment, Santa Claus himself. The event is free, and what’s better than a free event during the expensive holiday season?

Where: The Rotunda at Toronto City Hall