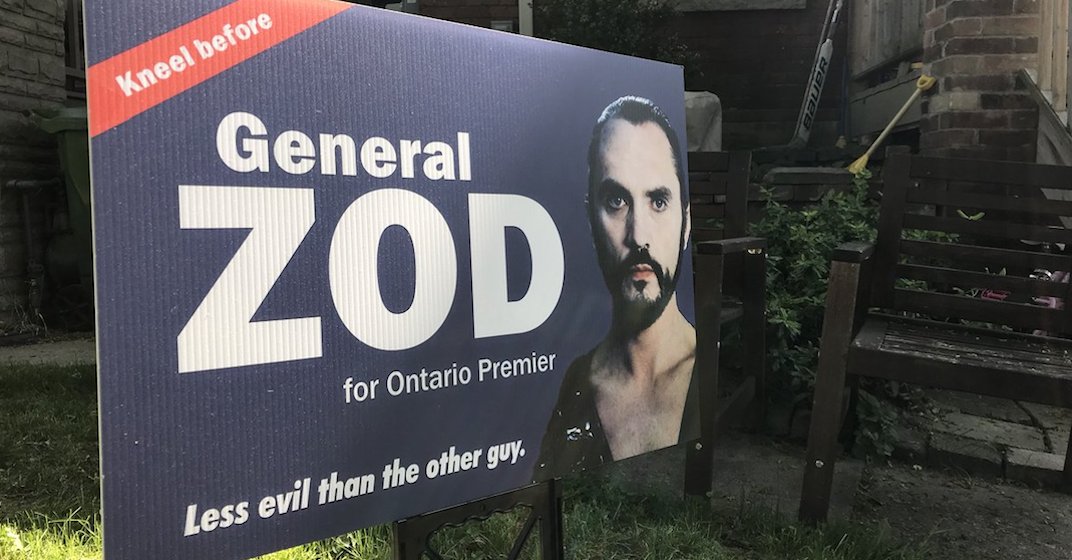 The Ontario election just got (even more) interesting.

As we approach the upcoming June 7 election, there’s definitely a lot of speculation about who’s actually leading the race.

And as Toronto tries to decide if it wants to see PC leader Doug Ford, the NDP’s Andrea Horwath, or current Liberal premier Kathleen Wynne run the province, a new candidate has recently entered the race.

But the new candidate is far more superior to the current candidates. So who is it you ask?

It’s none other than DC comics supervillain General Zod.

Seems like the Ontario election just got a little interesting as General Zod enters the race! I haven’t seen a platform yet, but he is quoted as saying, “I win! I always win. Is there no one on this planet to even challenge me?!” #ONpoli #ONelection2018 pic.twitter.com/K1bzAfb191

For those scratching their heads and unsure of who this super candidate is, General Zod is a character from the 1978 and 1980 Superman movies played by Terence Stamp.

And now, he’s promoting himself as  “less evil than the other guy.”

Made this so I can put this on my lawn. https://t.co/aud9DpcNHH pic.twitter.com/s2HtO4i4jR

The Ontario election has been a bit of a rollercoaster these past few weeks. A week ago, a poll showed NDP could capture majority in the upcoming election. Then just two days ago, the Ontario NDP and PCs were virtually tied in the leadership race.

And now, Doug Ford is back in the lead.

But if you’re among the crowd who doesn’t like any of the parties, perhaps General Zod is the candidate you need?

General Zod did try to enslave the Earth but Doug Ford would close down libraries “in a heartbeat”. So who is the real monster?#OntarioVotes #DougFord #ONPC

Make sure to visit Elections Ontario on June 7 to cast your vote. And don’t forget to consider the Man of Steel’s archrival as Ontario’s next premier.