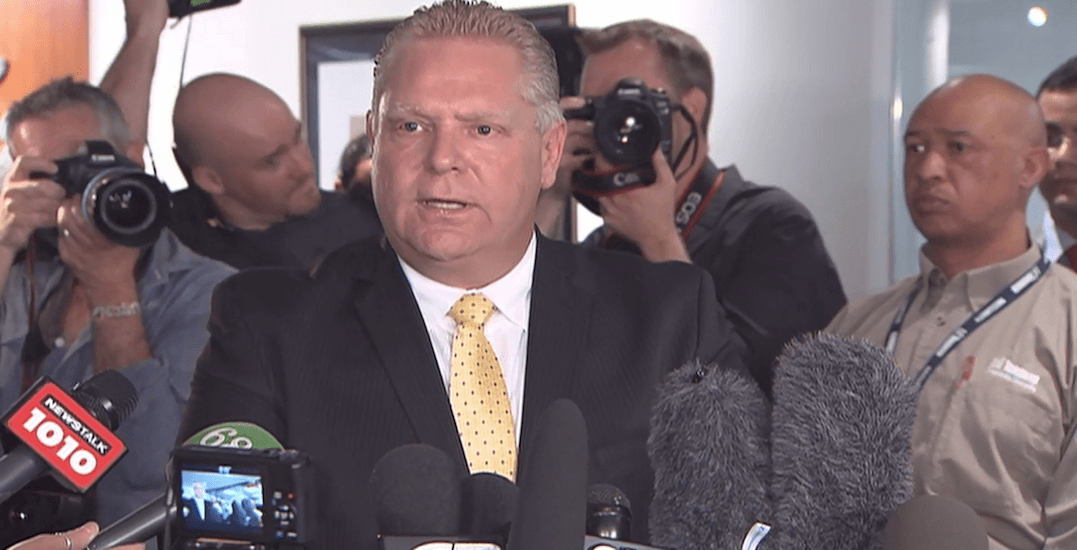 The battle for leadership of the Ontario Progressive Conservative Party came to an end  this morning when Doug Ford was officially named the party’s new leader.

“Tonight we took the first step in defeating Kathleen Wynne. The people of Ontario want the Ontario Liberals gone and they deserve nothing less,” said Ford in his victory speech.

“Tonight is a clear sign that there are a lot of work ahead of us. We have a lot more work to do before the next campaign. We have a lot to do in a very short amount of time. But I promise you this: I will get our party back on track.”

Ford replaces Patrick Brown as leader after he abruptly resigned in late January amid sexual misconduct allegations, which he continues to deny.

Following Ford’s win, Twitter continues to churn out reactions. And while most of the province seems hopeful and optimistic, the tweets have two decidedly different tones.

Best wishes to @fordnation on being elected the new Leader of the @OntarioPCParty. Looking forward to working together on conservative solutions to the challenges facing Ontarians.

If we’re sticking with the facts only: Doug Ford launched a campaign from a basement, and is now the leader of the PC party — he literally started from the bottom, now he’s here.

I would not have voted for Doug Ford but like all new leaders he deserves to be judged on what he does now as a leader. Unfortunately he will instead be media demonized and made into Canada’s “Donald Trump”.

I’ve said this from the very start of this race — underestimate Doug Ford at your peril. He will hold rural Ontario, he will translate in the north, he will terrify Liberals in Scarborough, Etobicoke and other parts of the 416. If he can fight 905 women to a draw, he wins big.

Why am I passionately supporting Doug Ford and the PC Party?
I am sick of seeing waste in healthcare spending ultimately being paid out in human suffering.
After 14 years of Liberal rule, The situation is only getting worse.
IT IS TIME FOR CHANGE!#Onpoli #Onhealth @fordnation pic.twitter.com/ARI3sBrAVc

Walking in the St Pat’s day with @fordnation is amazing. Downtown Toronto and a PC Leader all the love. pic.twitter.com/Cb8TBnKjWg

Make no mistake. Doug Ford is not his brother Rob. He’s a far more disciplined politician. Tonight he won the PC party leadership and now has a good chance of becoming premier. #onpoli #pcpoldr #cdnpoli

When Doug was talking at a gathering that I attended he started talking about competence and decision making. His point was, you ask the FARMER what the farm industry needs from government, you don’t TELL them what they need.
Doug Ford gets it.@fordnation #Onpoli @OntarioPCParty pic.twitter.com/U6omUPalaT

Congratulations to new @OntarioPCParty Leader Doug Ford, @fordnation. Time for our party to unite and move forward with the common goal of defeating Kathleen Wynne and the Liberal Government. #PCPOldr #PCPO

Don’t take Doug Ford lightly. He carries a convincing argument that the Wynne Liberals are corrupt, it’s time for change after 15 years.

Horwath needs to be pushing a bright bold future and that she is the only leader that can deliver.

Many made sure to highlight Ford’s flaws, comparing his views to the likes of US President Donald Trump.

Here is an image of Canada being smug about our politics and then electing Doug Ford as PC party leader. pic.twitter.com/s0AKojlMOi

The good news is: Once the corrupt PC executive stops running cover for their whiny loser friends and just admit who won — Doug Ford will clean house (illegitimate voting system included) & energize the electorate beyond recollection of this disasterous night. #pcpo #pcpoldr

Let it sink in. Doug Ford, closest advisor to Rob Ford during a mayoral term that made gloal headlines for chaos and drug abuse, is leader of the poll-leading Ontario PC party and will soon fight to become premier of Canada’s most populous province.

Doug Ford makes Trump look like Ghandi. He is a bad man. A bully and can’t be trusted to run the province. The @OntarioPCParty just lost my vote.

Tonight, Doug Ford was named the leader of the Ontario PC party.

Doug Ford is literally guilty of beating 3 women in public!

We’ll have time to sort out which is the bigger joke; Doug Ford or the party he now leads.

Nobody should be smug about Doug Ford. He’s an enemy of working people, of climate justice, of equity. He’s a phoney anti-elitist, whose reactionary politics poses a threat to the gains that people have won over the years through struggle #PCPO #onpoli

If Doug Ford becomes Premier, we are no better than the Americans. #cdnpoli #onpoli

Ford will now lead the Ontario PC Party to unseat Liberal Premier Kathleen Wynne in the provincial election on June 7.