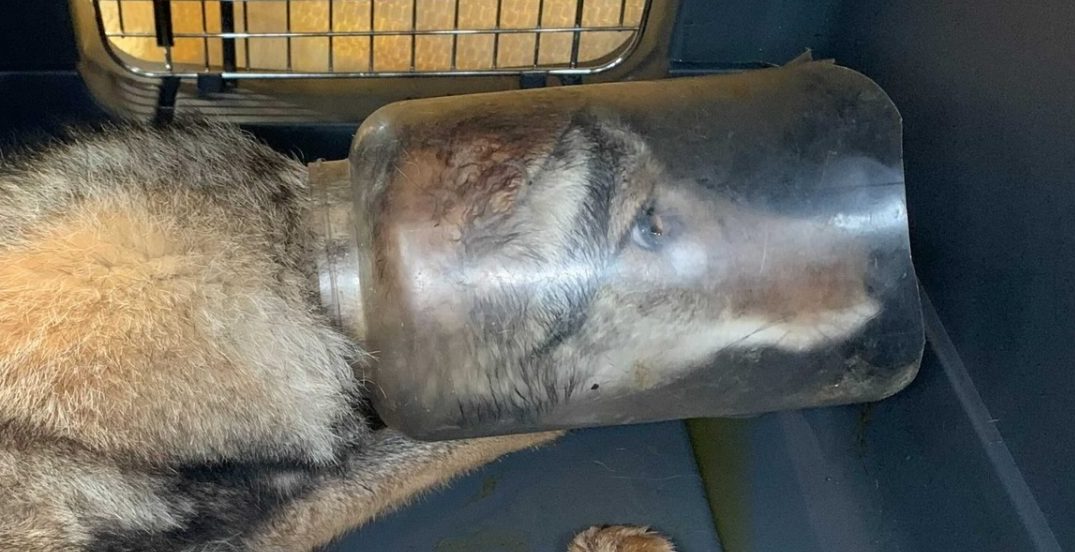 A coyote in Toronto got more than it bargained for trying to lick something out of the bottom of a jar.

Toronto Wildlife Centre took in a coyote with a plastic jar stuck on her head, using pliers to cut the jar off of the animal, they said in a Facebook post.

While the coyote was uninjured, she was dehydrated and hungry after being unable to eat because of the giant jar on her head.

This poor #coyote was admitted with a plastic jug stuck on her head! Our medical team removed the jug and treated the coyote for dehydration before she was released. It’s important to thoroughly wash recyclables and discard them in a secure bin to keep our wild neighbours safe! pic.twitter.com/CbLJLpzdBY

“After a few days of fluids, nutritious food and close monitoring, the coyote was able to return home,” Toronto Wildlife Centre said on Facebook.

Recyclable items, like plastic jars, should be cleaned thoroughly prior to recycling. The wildlife sanctuary said that this helps keep animals safe.

“It’s always important to thoroughly wash recyclables and discard them in a secure bin to keep our wild neighbours safe!” they said on Facebook.

Coyotes have a bad reputation in cities as they are scavengers and have attacked humans and dogs in an effort to find food. The City of Toronto has a fact sheet on what to do if you spot a coyote in the wild and how to handle it if one happens to get too close for comfort.

With coyote sightings increasing in the city, Toronto Wildlife Centre says it’s important to make sure never to feed coyotes, intentionally or not.

If you spot coyotes near your home, Toronto Wildlife Centre suggests these guidelines to help prevent close encounters: