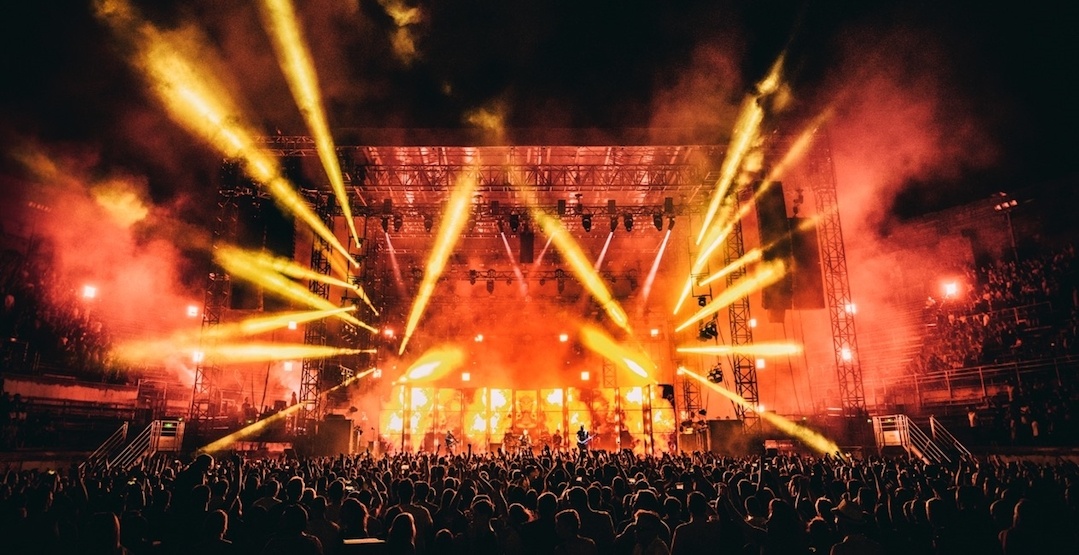 Ah the sweet sounds of summer.

Gear up for one of the hottest months in music, Toronto! July is a busy music month in the city. Some legendary rock & rollers are in town, and so are a few indie darlings. All in all, July gets an A+ for its mix of genres, bands, sounds, and festivals.

Are you ready for your summer 2017 concert series? You better be.

As part of Toronto’s major four-day celebration at Nathan Phillips Square, there will be a special Canada 150 collaboration featuring the renowned Toronto Symphony Orchestra and one of the great songwriters of his generation, Ron Sexsmith; joined by PEI’s remarkable singer/songwriter Rose Cousins, for a monumental performance touching on some of Sexsmith’s most memorable songs from his 30+ year career. Charlotte Day Wilson and Kid Koala will also be performing on Canada Day before the fireworks.

Toronto’s dvsn are home this month for a free show. On OVO’s label, dvsn released a highly successful debut album in 2015, and will be bringing their signature lush sounds to the stage at Nathan Phillips Square this long weekend.

Here’s a man who needs no introduction. The legendary Bob Dylan is highly regarded as the “Voice of a Generation” with a career spanning more than five decades, countless awards, and more than 100 million records sold. Dylan is in Ontario for six tour dates, including this month’s show at the ACC.

Get ready to dance and shake your booty, as two international superstars are coming to town this summer. Grammy Award-winning sensation Enrique Iglesias and Pitbull reunite for a North American tour that concludes at the Air Canada Centre on July 6. The two performers will be joined by CNCO as their support on the 16-city tour.

British singer-songwriter Ed Sheeran is bringing his singles “Castle on the Hill” and “Shape of You” to Toronto this month, as he tours his third and latest album ÷. Sheeran just began his North American tour last week with James Blake, and has two shows in Toronto

Digital Dreams, once Toronto’s EDM giant summer celebration, got a make over this year and is now the Bud Light Dreams Music Festival. The 19+ event brings a heavy dose of electronic music over two days, and includes Above & Beyond, DVBBS, and Steve Angello.

With only two stops in Canada, Toronto is lucky to see the Gorillaz stop in during their Humanz Tour 2017. And like most of their gigs, you can expect a ton of visuals accompanied by live music. Humanz is the band’s first album since 2010, and features collaborations from several artists including Grace Jones, Kali Uchis, Vince Staples, Popcaan, D.R.A.M., Anthony Hamilton, De La Soul, Danny Brown, Kelela, and, Pusha T. So you never know who’ll show up!

It won’t be long until you can hear Frozen’s Queen Elsa herself sing. Tony Award-winning actress and singer Idina Menzel is coming Toronto as part of her massive 2017 World Tour. Menzel’s world tour includes over 50 cities, and it follows the release of her fifth solo album Idina.

Metal heavy hitters Iron Maiden are back on the road for their ‘Book of Souls World Tour.’ The English band is currently on their North American leg, and by the end of this tour this month, the band will have performed 117 shows in 36 countries. Legends!

Brits Muse are known for their live performances. After their highly successful ‘Drones World Tour’ in 2015/2016, the band is back in Toronto with special guests Thirty Seconds to Mars… Yes, Jared Leto’s band.

The British rockers and American singer are back together for another collaboration tour, and they’re coming to the Air Canada Centre on July 18. Their 2017 North American tour will see Brian May, Roger Taylor, and Adam Lambert debuting a new show specially designed and created for this tour, bringing Queen favourites like “Another One Bites The Dust,” “Bohemian Rhapsody,” “We Will Rock You,” and “We Are The Champions.”

Brandon Boyd and the boys of Incubus formed back in the early 90s. Seven studio albums, and several world tours later, the indie rockers return with their new album 8. Catch them playing their latest single “Nimble Bastard” and classic like “Pardon Me.” The band is touring with Jimmy Eat World.

Ever since the release of DAMN., Kendrick Lamar’s fourth studio album, hip-hop fans have been going nuts for Kung Fu Kenny, AKA K-Dot. DAMN. has solidified Lamar as the king of hip-hop today, not only lyrically but also on the charts, and he’s so hot in Toronto right now that Lamar added another show here later this summer. Lamar plays his July show with Travis Scott and D.R.A.M.

Scottish faves Belle and Sebastian have nine albums to their name, and plenty of hit singles in the indie world. From 1996’s Tigermilk and If You’re Feeling Sinister to 2015’s Girls in Peacetime Want to Dance, the band is bringing their indie folk sounds to the Sony Centre at the end of the month.

It’s not deja vu (at least not for the first show). American hip-hop recording artist and record producer J. Cole is stopping in at the Air Canada Centre on July 28, as the multi-platinum-selling artist is touring in support of his fourth album, 4 Your Eyez Only. Since its release, each of its ten tracks has notched a place on the Billboard Hot 100 chart. The “4 Your Eyez Only Tour” follows Cole’s 2015 “Forest Hills Drive Tour,” which was the highest-selling hip-hop tour of that year, after which Cole embarked on an international festival run in 2016. J. Cole is on the road with Anderson .Paak.

Multi-award winning dancehall artist Sean Paul is back. Yes, THE Sean Paul. His last album was released back in 2014, and he’s playing The Move Throwback Bash with Brandy, Ginuwine and more.