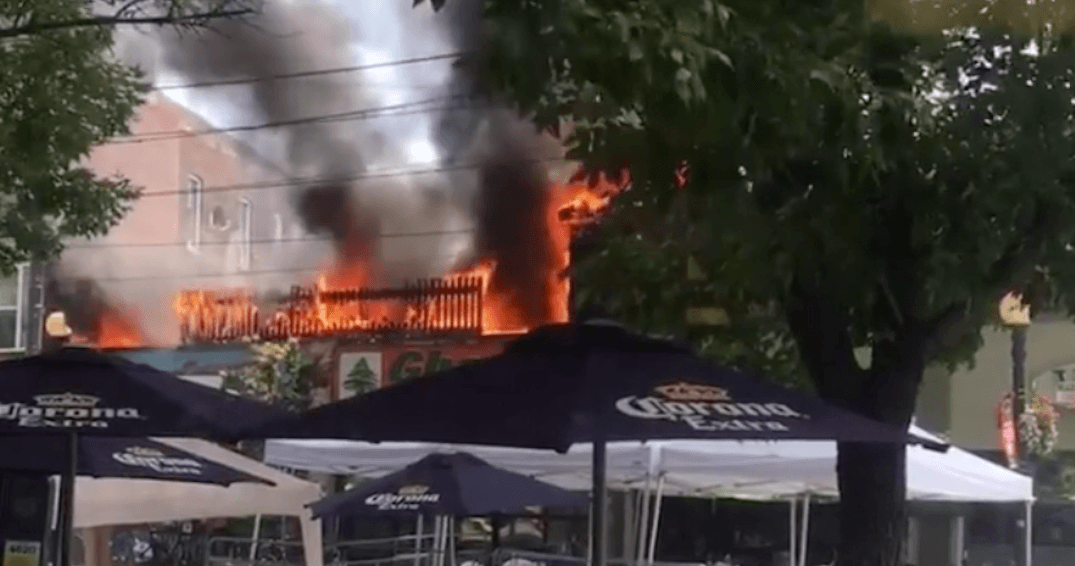 Firefighters were called to College Street between Grace and Beatrice street around 2 pm to battle the blaze in a two-storey building.

When firefighters arrived at the scene, they evacuated the buildings and barriers were put in place to keep festival-goers safe. No injuries were reported.

Fire crews were able to put out the fire before it spread to the neighbouring buildings.

Chief of Toronto Fire Services Matthew Pegg said it had been a very demanding day for Toronto Fire crews, who had battled various fires during Sunday’s extreme heat.

It has been an extremely demanding day thus far for @Toronto_Fire crews, battling a number of difficult fires in the extreme heat. On high heat days, it is very difficult to keep FF body core temps and hydration under control when wearing bunker gear. https://t.co/fS1kxy1T0Q

From the photos and videos circulating on social media, thick black plumes of smoke and flames can be seen from the street, which was filled with people visiting the festival.

Fire at the Fish Store and Ghazale on College interrupts Taste of Little Italy #Toronto pic.twitter.com/OAFeXTq7Yj

Crazy day at taste of little Italy. Hope everyone is ok. A+ to Toronto fire. Speedy arrival. pic.twitter.com/Mqq7NZYbkY

Toronto Fire is currently investigating what caused the blaze.