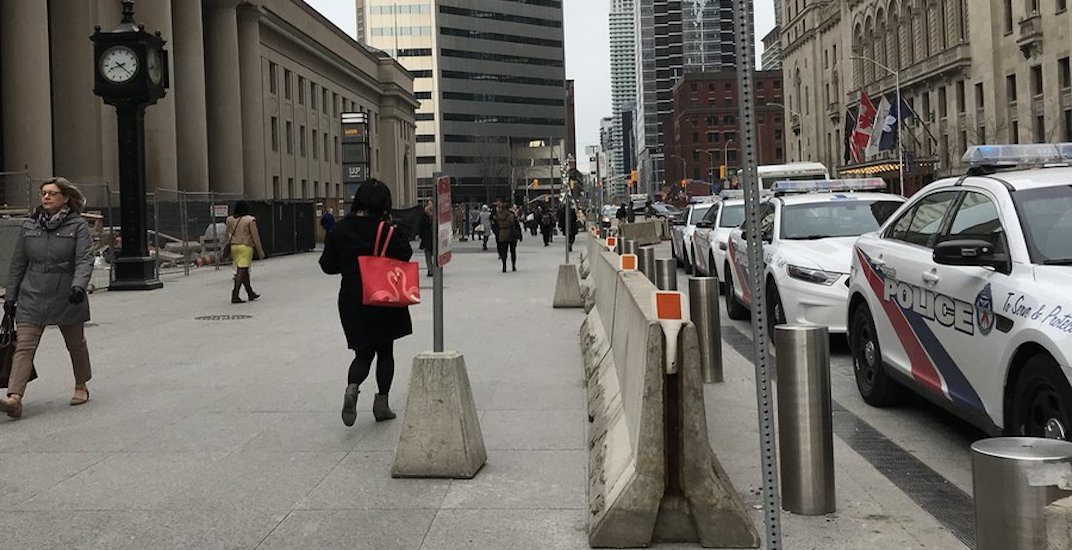 Additional safety measures have been taken to keep pedestrians safe in Toronto, following the fatal van attack that claimed the lives of 10 innocent pedestrians and injured 15 others in North York on Monday.

“Heads up if you’re travelling around Union Station,” wrote Aikins on Twitter today. “There are now barriers for protection which need a little navigation.”

Heads up if you’re travelling around @unionstationTO. There are now barriers for protection which need a little navigation. Any questions about safety or concerns pls seek out @GOTransitSSD who are around along with @TPSOperations pic.twitter.com/R7rXCVddIn

Aikins also added that additional Toronto police and GO Transit Safety officers are stationed around the station to help anyone with questions or concerns about safety.

Last month, Toronto police set up concrete barriers in the area of the Rogers Centre as part of increased security measures for pedestrians.

A photo shared on Twitter shows that additional concrete barriers had been delivered to the Rogers Centre this morning.

New bunch of concrete barriers have been dropped off on the north side of the Rogers Centre. pic.twitter.com/iGzyfhGdnv

These safety measures follow Monday’s horrific attack, which police are saying was deliberate.

Alek Minassian, a 25-year-old Richmond Hill man, was responsible for driving the rental van that mounted a curb and ran down pedestrians in the busy intersection of Yonge and Finch.

Minassian was arrested on Monday, following an intense standoff with a lone police officer, who is now being praised for the peaceful arrest.

Minassian has since been formally charged with 10 counts of first-degree murder and 13 accounts of attempted murder.

He also said that his motive is still unknown.

Although, there are speculations circulating that Minassian may have been motivated by the ideology of an online group called Incel.