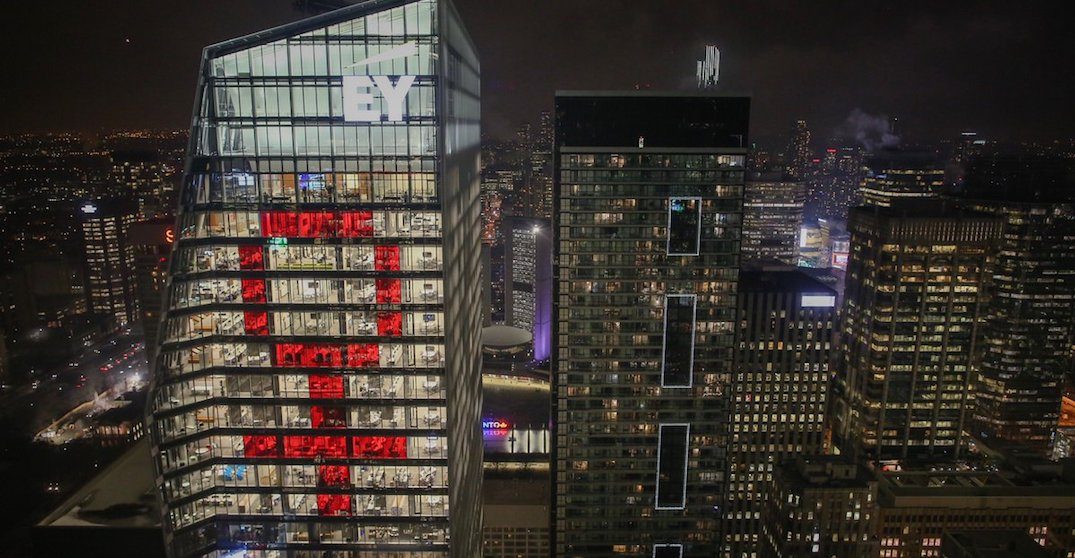 Toronto’s TD Centre, Bank of Nova Scotia, Ernst & Young, Ontario Teachers’ Pension Plan, and BMO were among more than 30 buildings around the world to illuminate buildings with giant red female symbols on the eve of International Women’s Day.

The bold move was part of the Catalyst Skyline Takeover, a global campaign to push for equality in the workplace.

The symbols lit up the night sky, changing not only the Toronto city skyline but skylines across 10 cities in five countries.

Our EY offices tonight light up the skyline in Toronto and NYC in celebration of all women at EY and in our communities around the world #CatalystForChange @EYnews @CatalystInc #pressforprogress @EY_WFF pic.twitter.com/56MN61qrV0

According to Catalyst, the campaign is pushing women and men to work on creating diverse and inclusive workplaces. Even though women currently make up 47% of workforces in Canada and the US, men still lead more than 95% of the most powerful companies around the world.

The powerful visualization demonstrates the international business community’s commitment to greater diversity, inclusion, and gender equality and it will remain in place through March 8 to celebrate International Women’s Day.

So if you’re in the Financial District today, make sure to look up.