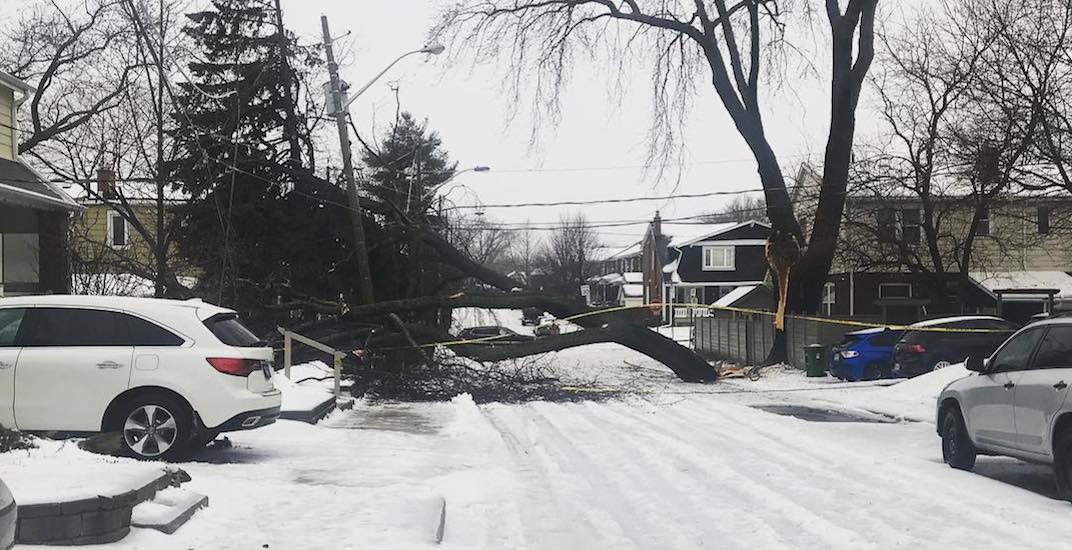 Tens of thousands of people are without power this morning in the Greater Toronto Area and southern Ontario, following a horrendous ice storm that rocked the province this weekend.

Correction to our previous tweet: outage restoration progress has the number of customers without power down to 10,000. Crews will continue working until all power is restored. #ONstorm

High winds of up to 100 km/hr in some areas, heavy rainfall and ice pellets resulted in snapped limbs from trees, downing power lines and poles, and hundreds of collisions and flight cancellations.

And while winds have started to die down, a rainfall warning is still in effect for the City of Toronto, with Environment Canada forecasting rainfall amounts in the 20 to 30 mm range before things taper off later today.

While many of us heeded Environment Canada’s warnings and stayed indoors, others headed outside to capture the storm and its aftermath.

For those of us who weren’t so brave, check out top photos and videos of this weekend’s powerful ice storm in Toronto.

I stood for 5 min laughing beside my car because I actually thought there was a chance of me getting into it tonight. #icestormTO pic.twitter.com/Y2clzrtICY

The ice storm continues to cause extensive damage across the city. Shout-out to our crews for working tirelessly in very tough conditions. Also a big thank you to our customers for being so patient-we know it’s not easy being in the dark. #ONstorm pic.twitter.com/osYYrMHkIy

This is not a file photo. Taken just now. Freezing rain is really coming down. @weathernetwork network says this is just the start of what’s to come. Pls be careful on foot or in the car. Our crews have to drive in this. Hopefully you don’t. #onstorm #FreezingRain #icestorm pic.twitter.com/oFo4YYyj5M

Did you see this video… friend sent it to me #onstorm car into the house. #TORONTO pic.twitter.com/cEvfqeFvhL

The #icestorm2018 howls through Toronto this weekend. #torontoweather, #icestorm pic.twitter.com/R5cVGLpWQx

Some are trying to make the most out of the crazy weather that we are having – yes cross country skiing in the middle of April! #icestorm #onstorm pic.twitter.com/YphbgxIhiF

Active operations continue in response to #ONstorm. Give yourself some extra time to travel this morning. pic.twitter.com/aBndLdyMvh

Welp I’ve been watching this tree swaying for the past hour and it finally fell….#onstorm #darkto pic.twitter.com/Qf3UIY7oqx