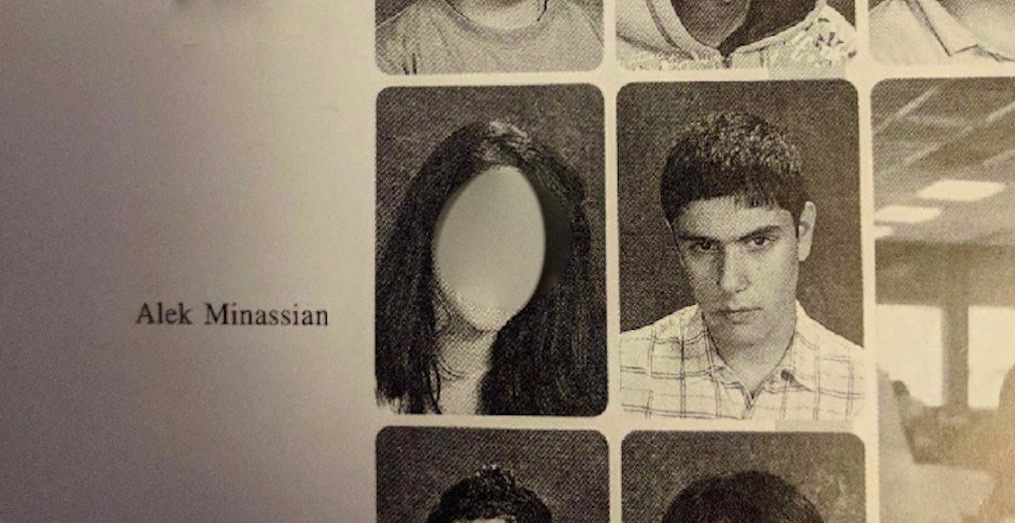 Alek Minassian is the man responsible for driving the rental van that killed 10 innocent pedestrians and injured 14 others in North Toronto Monday afternoon.

Minassian was formally charged with 10 counts of first-degree murder and 13 counts of attempted murder at the courthouse on Finch Avenue on Tuesday morning.

Here’s what we know about the 25-year-old from Richmond Hill.

Minassian attended Thornlea Secondary School in Thornhill, just north of Toronto. While in high school, Minassian was enrolled in a program for students with special needs.

Daily Hive spoke with a number of Minassian’s former classmates, who described Minassian as a smart student who was socially isolated, bullied, misunderstood, but seemed absolutely harmless.

A former classmate, who has asked to remain anonymous, said Minassian was never a threat or showed any signs of violent behaviour.

This student also recounted Minassian not having many friends, and that he had a fear of female classmates.

“If any girl looked or said “Hi” to him, he would turn away, hide his face, act nervous or uneasy and make high pitched almost animated frightened noises.”

Another student who was in Minassian’s grade nine math class remembered him as being “pretty memorable”.

“He would make meowing noises in the halls and pretend he was going to bite people like a cat.”

This student also said that Minassian “seemed like he was always joking around and trying to enjoy himself.

He really seemed like a really nice kid though.”

According to Minassian’s LinkedIn account, he was a student at Seneca College from 2011 to 2018.

At a press conference on Tuesday, police confirmed that Minassian had posted a cryptic message on Facebook prior to his rampage, making reference to “The Incel Rebellion.”

There are speculations circulating that Minassian may have been motivated by the ideology of an online group called Incel.

Police said they will be investigating Minassian’s Facebook status in the coming weeks.

On Monday, April 23, at around 1:30 pm police received various calls about a white Ryder rental van that had mounted the sidewalk in the busy intersection of Yonge Street and Finch Avenue, before running down innocent pedestrians and anything in its path for nearly a mile.

Ten pedestrians died as a result of the attack and 14 more were wounded.

According to Toronto police Cheif Mark Saunders, it took officers seven minutes from the initial call received about the van attack to arrest the Minassian.

Minassian was arrested shortly after the attack on Monday, following a brief sidewalk standoff with a lone police officer.

In a video shared on social media, a Toronto Police officer can be seen with his gun drawn as Minassian continually tries to force the officer to shoot him, pointing his cell phone at the officer like a gun and then faking as if he’s drawing a gun to shoot the officer. When this does not work the suspect yells, “I have a gun in my pocket.”

The officer remains calm, warning the man to get down or he’ll be shot, to which the suspect responds, “Shoot me in the head.”

The officer responsible for arresting Minassian is now being commended on social media for remaining calm and not using excessive and deadly force.

He was not known to police

Toronto police Cheif Mark Saunders told media Monday night that no gun was found on Minassian at the time of his arrest.

He also said Minassian was not previously known to Toronto police, and the van attack “definitely looked deliberate”, yet a possible motive is still unknown.

On Tuesday morning, Minassian was formally charged with 10 counts of first-degree murder and 13 counts of attempted murder. According to CBC, Minassian showed little emotion during his court appearance.

According to reports, Minassian is scheduled to reappear in court via video on May 10.

No evident link to wider terrorism

“At this time we have no reason to suspect that there is a national security element to this attack,” said Trudeau.

Detective Sgt. Graham Gibson of the Toronto Police Service told the media on Tuesday the victims of the attack were “predominately female” and ranged in age from mid-20s to 80s.

Police said, however, that they don’t have any evidence the suspect specifically targeted women.

He was a member of the Canadian Armed Forces

Officials confirmed that Minassian was a member of the Canadian Armed Forces for two months last year. However, Minassian did not complete his recruit training and requested to be voluntarily released after just 16 days of training.