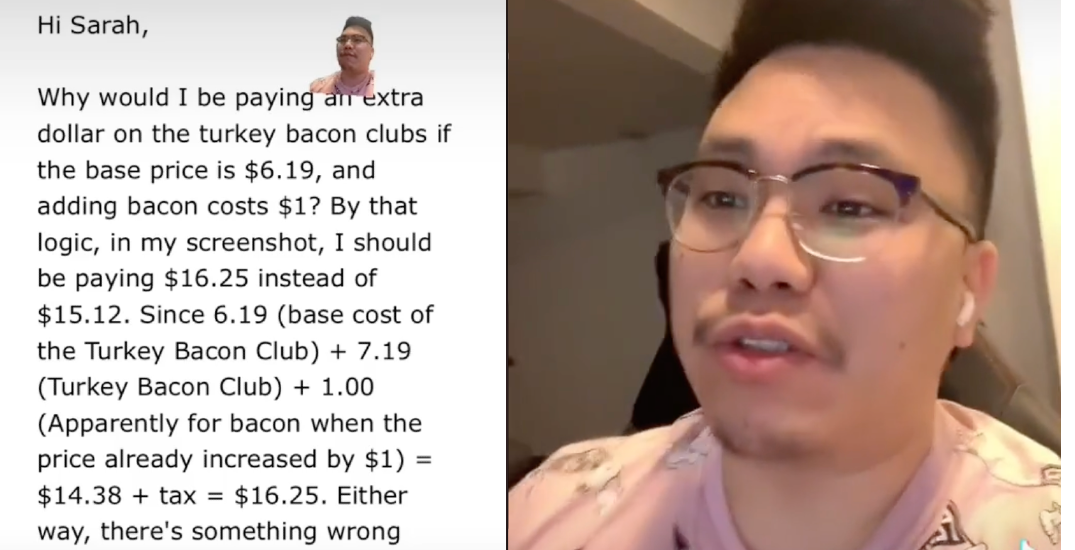 Tim Hortons got the math lesson of their lifetime from a TikToker after he found an inconsistency with his order bill.

Jeff Chong took to TikTok to tell the story of what ensued after he placed an order for two turkey bacon club sandwiches with extra bacon on each and a small decaf coffee via the Tim Hortons mobile app.

The order subtotalled $17.47 on the app, but according to Chong’s calculations, the correct subtotal was $15.97.

“I AM PETTY. I WILL START WARS TO PROVE MY POINT,” read his caption. Think that’s an overreaction? You might not think so after reading what happened.

At first, Chong did what anyone else would do — he emailed customer service.

“I’m just like, ‘It’s a quick mistake. Whatever. Let’s get this quickly over with,'” he thought. And, boy, was it going to be anything but quick. 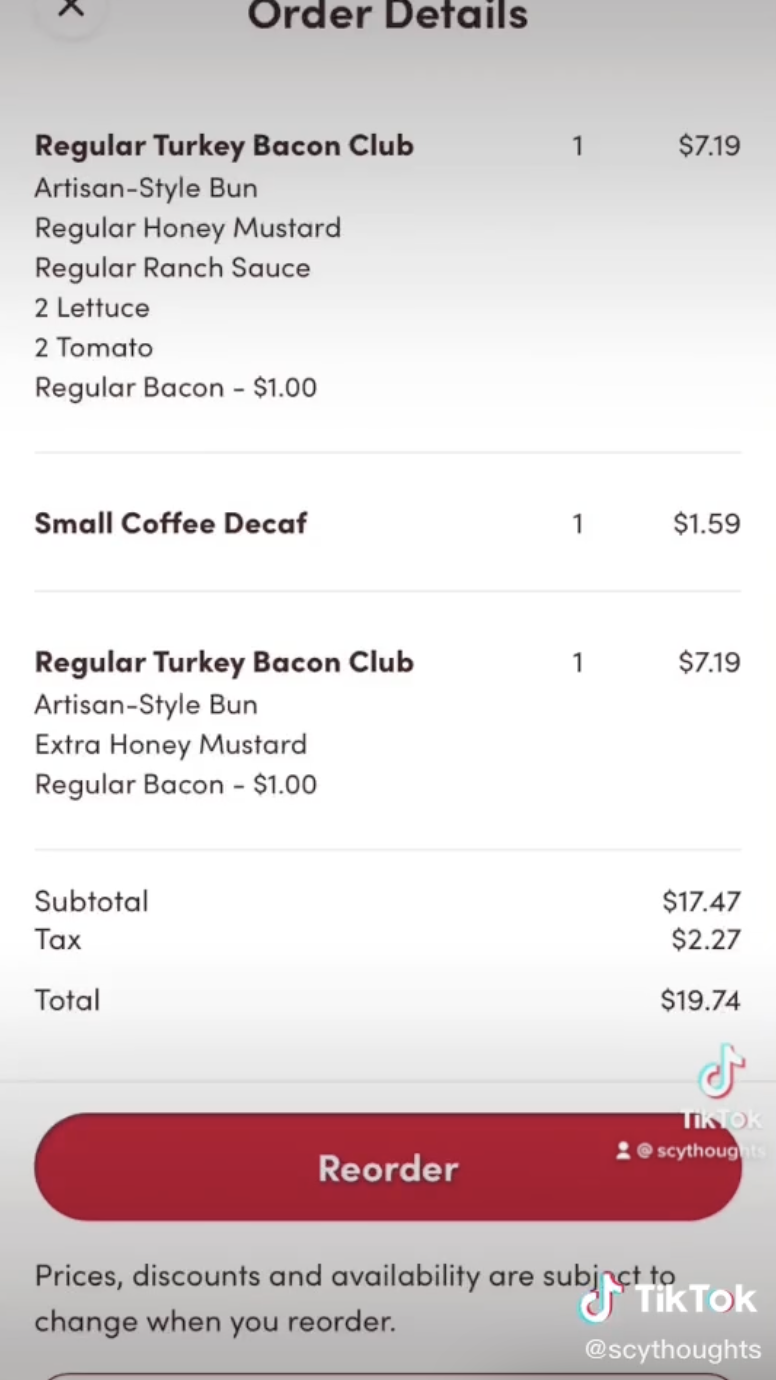 What followed was a gruelling series of correspondences between Chong and a Tim Hortons representative only known as Sarah D.

Chong messaged customer support explaining the issue and attaching a screenshot of his bill, and Sarah replied with her own screenshot, letting him know that what he paid for the order was the right amount.

But her screenshot showed exactly what Chong had sent — no new information. 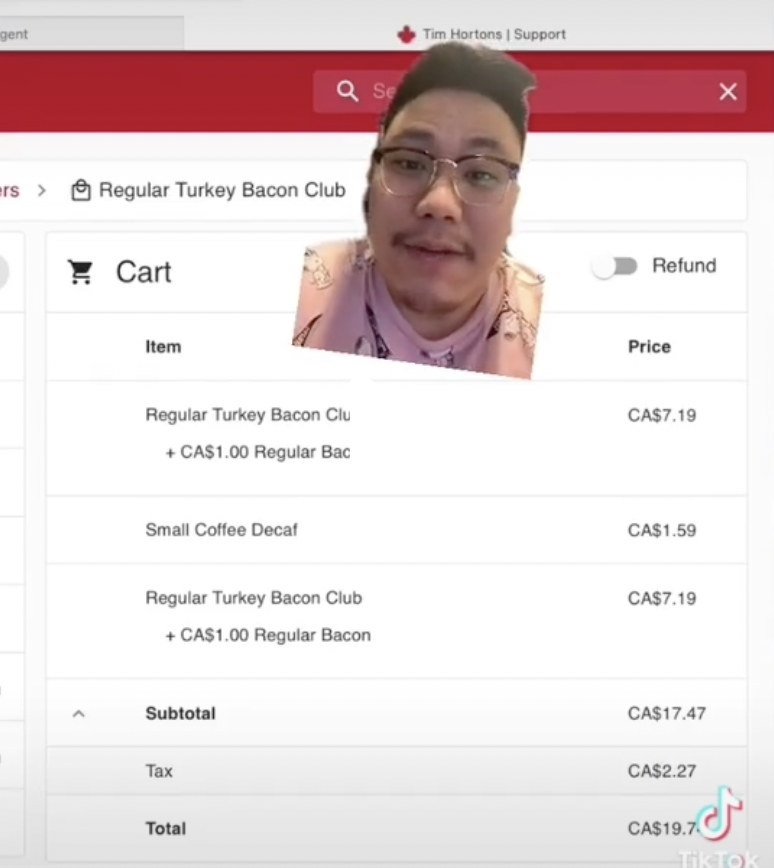 Thinking this was an oversight, he emailed her again, reminding her that the subtotal was supposed to be $15.97. Once again, Sarah said her math was, in fact, correct, and the added $2 was for extra bacon.

“But it wasn’t a $2 difference — it was less than that!” Chong said narrating the story on TikTok. “So at this point, I’m thinking, ‘F*ck it, I don’t care about the money anymore. I’m just here to prove a point.'”

He broke down the bill even more clearly to show that he had obviously acknowledged the bacon and wanted to inquire where exactly the extra $1.50 came from. 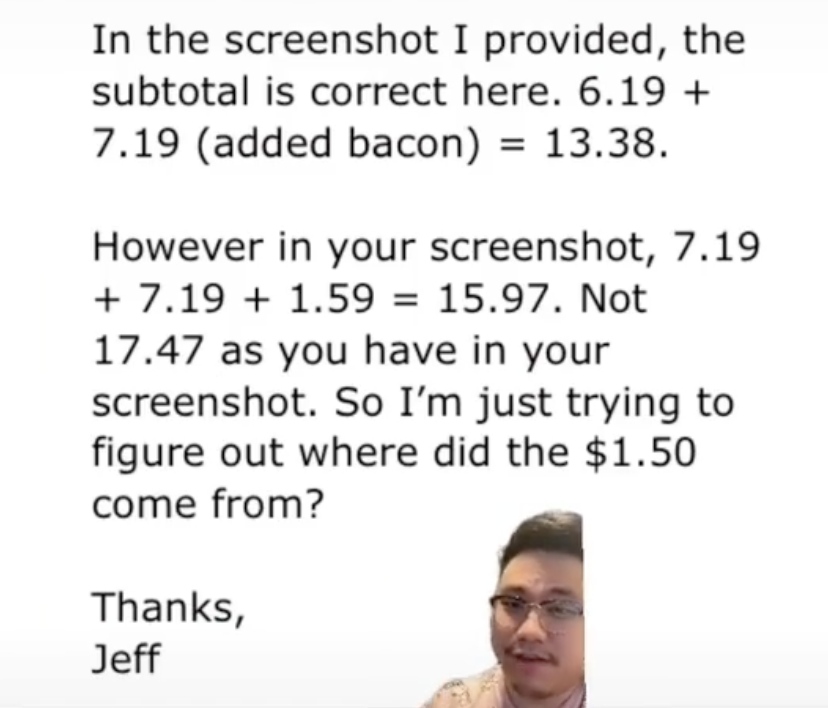 But it seems the TikToker had met his match. Sarah D wasn’t going to back down that easy either.

She replied with her own breakdown, adding once again that he had indeed paid the correct amount, but that she was going to add 250 points to his Tim Hortons account anyway for the “confusion.” 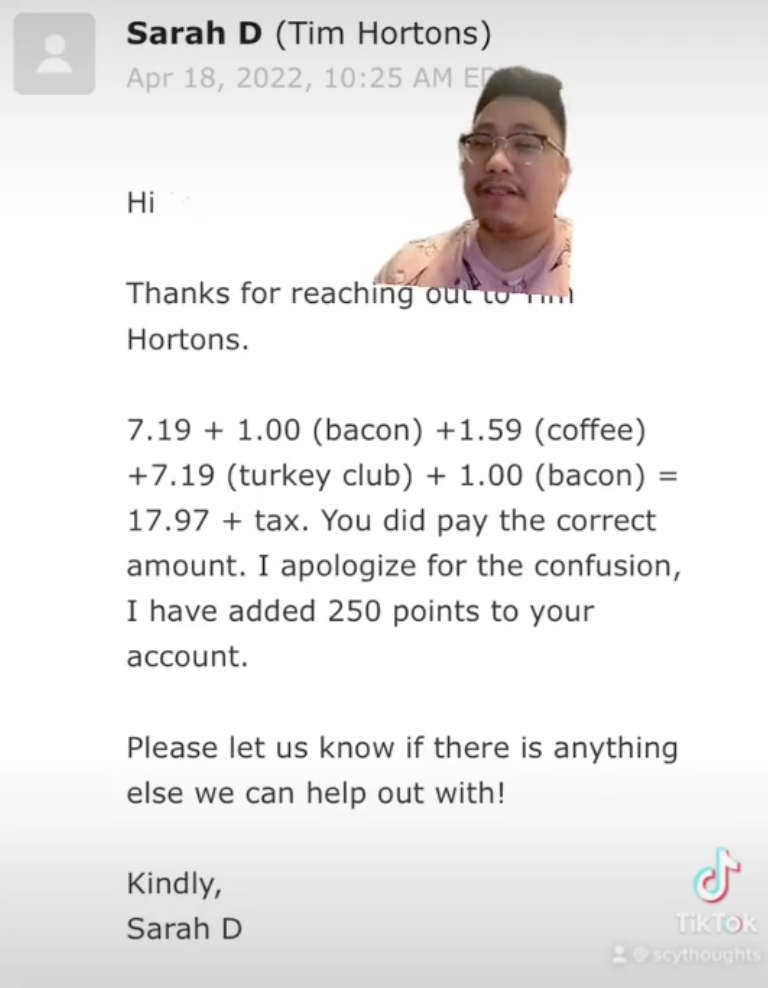 “Either way, the subtotal was wrong,” said Chong. He doubled down with further calculations to “disprove her logic.”

According to him, Sarah’s bill breakdown was different, but still not correct. 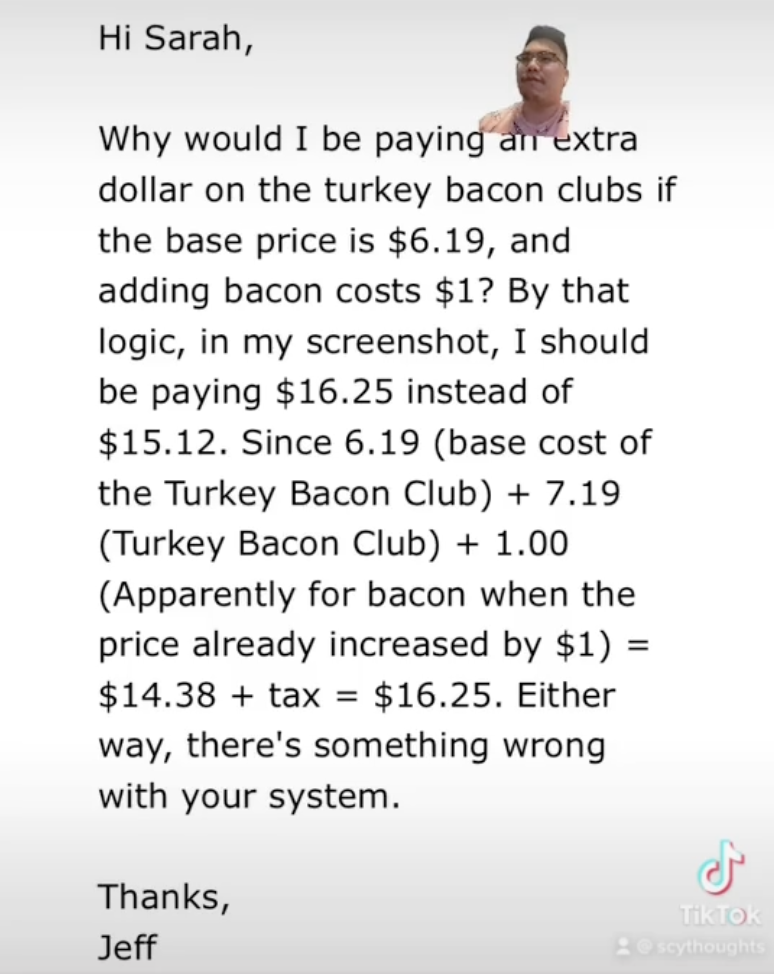 “To add more fuel to the flame, I pointed out that her subtotal is different from the subtotal that I received on my receipt,” Chong told his viewers, ending the video on a deadpan-yet-villainous “I await your response, Sarah.” 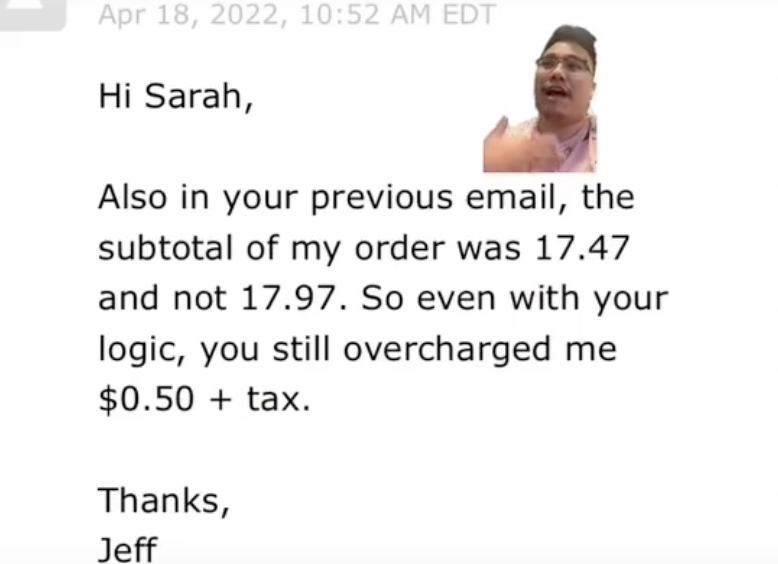 One of the commenters on Chong’s video pointed out that the extra $1.50 was the cost of the lettuce and tomato.

“Am I a Karen?” Chong wondered in a second video.

“For those who are curious, yes, the lettuce is a dollar extra, and the tomato is 50 cents,” Chong said mid-giggles. “But they didn’t list it, so how the f*ck am I supposed to know?”

He said that he still believes it’s wrong to charge people without showing what they’re being charged for. “Did I just start a class action lawsuit…?” he asked wistfully.

Chong reported that Sarah admitted she was wrong. Despite the sheer pettiness of the whole debacle, Chong doesn’t want Sarah to get in trouble for what happened.

@jeff.chong @timhortons Again please don’t fire Sarah over this. It’s all in good fun. But real talk, can I get my $1.50 back? #timhortons #timhortonscanada #petty #dontfiresarah #mathlesson ♬ original sound – Tristan Maloney