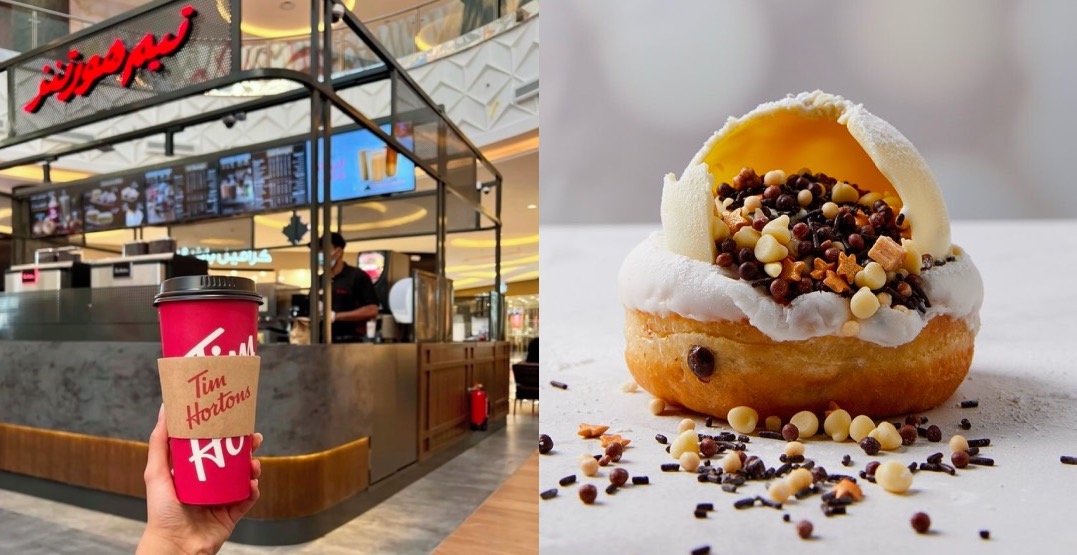 Tim Hortons is a Canadian institution.

Maybe it’s because of Justin Bieber, or simply because the coffee is so addicting, but it seems like the rest of the world is beginning to catch on as well.

Tim Hortons now operates in 14 different countries, with Canada having the most by far.

Here’s a quick look at what Tim Hortons looks like in other parts of the world.

The chain ranks surprisingly high here, with Tim Hortons consistently being one of the best reviewed cafes in Dubai. There are definitely plenty of cinnamon drinks and treats on the menu here, along with the classics we have in Canada too. Mini muffins, lemon curler donuts, and local relevant sandwiches like the Mumbai Bhaji are all popular options we don’t have in Canada. The rich milk cake is something we definitely need here.

The Tim Hortons in the States feels quite similar to ours, with the occasional difference in features or by region. The branding is still very Canadian-focused, with it having almost a themed-vibe down there. They might have a macaroni and cheese bowl as a soup, where Canadians don’t have that option. The biggest difference that people notice is the cup sizes, with Americans having a much larger scale. Everything really is bigger in America.

Tim Hortons is growing incredibly fast in China, and hopefully some of that growth spreads so far that it allows us to try some of the tasty treats offered there. There are many differences on the Tim Hortons menu in China, like matcha tea drinks being incredibly popular. There’s also congee served there, a common rice porridge in Asia. Timbits and donuts are a huge deal in Canada, but China doesn’t seem to love them as much. The decor of the space is another huge difference, with the Chinese locations all looking fairly different from one another, from the classic Tim Hortons look, all the way to an upscale cafe and eatery environment.

The Tim Hortons menu in the Philippines has some delicious sounding items we can’t try in Canada, and also some absolutely wild options. Black Forest cake drinks and donuts are a popular treat, with the beverage made from ice-blended chocolate drink mixed with red berry puree with a sweet and tart flavour. There are also a ton of meat-free options, from quesadillas to burgers. Perhaps the drink we wish we had here the most, just to say we tried it, is the much-loved Snow Coffee, topped with frothy cheese foam.

Spain certainly seems to love sweets, and they have some delicious sounding ones. Cheesecake and crumble donuts, and the sorteo especial as a mini-bouquet of Timbit like donuts. Canada loves a Tim Hortons breakfast, but Spain one-ups us with the Chocolate Banana Pancakes they have. Each pancake is fried to golden brown perfection, layered with a decadent serving of chocolate spread, topped with freshly cut fruit and garnished with nuts and a side of whipped cream.

Most locations across the UK have the OFG Sandwich, made with crispy fried chicken, your choice of added bacon, sandwiched between two of the restaurant’s most iconic and sweet donuts, and topped with maple syrup. Like, how do we not also have this sandwich in Canada? Other wild items include a cookie dough donut and the snowball surprise donuts, filled beautifully with extra goodies. The Tim Hortons here also appears to be a burger joint, with three different burgers and even a hot dog to try.

Thai Tim Hortons sells donuts, Timbits, and other familiar treats, as well as some pretty tasty options that are new to Canada.There are six different melts to choose from, different grilled cheese-style sandwiches like the tuna melt, ham grilled melt, and the tomato egg melt. From the basic Americano to the popular matcha latte, an espresso coffee menu is the concept for beverages at Tim Hortons here. And don’t worry, they still have plenty of Ice Capp flavours and double doubles available too. The locations here have also been known to take exciting collars, like the limited-edition Salted Caramel Cappuccino that used real Häagen-Dazs ice cream in it.

Does Tim Hortons have waffles in Canada? Sadly, no. Want to know what else we don’t have? Sausage, egg, and cheese breakfast sandwiches in between two waffles are rare, but Mexico is lucky enough to have them. The menu items and the look of the store are actually quite similar, but we definitely wish we had that. The Mexican menu also has some incredible sounding sandwiches that we don’t have, like the pollo toscano, beef and cheese, and crispy chicken.