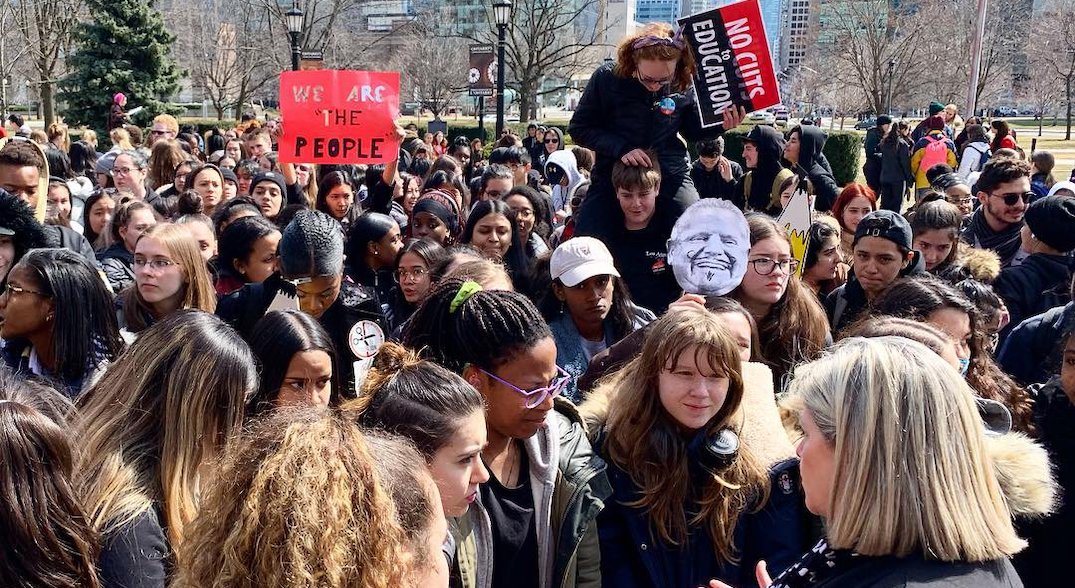 After a mass student walkout across Ontario on Thursday to protest the Conservative government’s cuts on education, another massive rally is planned for this weekend.

Student protests were initiated to oppose Doug Ford’s government’s changes to the sex education curriculum, along with changes to OSAP, and “in support of climate change initiatives.”

And responding to the student action, Harvey Bischof, President of the Ontario Secondary School Teachers’ Federation (OSSTF/FEESO) said in a statement, “We share these students’ concerns and their frustration at not being listened to by this government.”

“This minister and her government are the ones using students as a smokescreen,” said Bischof. “Students have a vested interest in their education and are expressing their concerns. The minister should sit down and listen to their issues instead of dictating what she thinks is best for the next generation of Ontarians.”

Just as students protested on Thursday, Unifor said that memos acquired by the Toronto Star reported that the Conservatives plan to cut 3,475 teaching jobs in Ontario, adding that the average secondary school expected to see a loss of 11 full-time teachers.

“The Conservatives have taken their ideological pig-headedness too far. It’s time to face the facts and recognize not only that strong public education is essential to building a better province, but also that the people of Ontario will never forget these punishing cuts,” said Jerry Dias, Unifor National President. “Come back to reality, Ford, before you cost Ontario’s youth the bright future that they deserve.”

As students walked out of class, Minister of Education Lisa Thompson said that it was “a disappointing day for Ontario’s parents and students.”

The education minister also advised all school boards that she expects them “to take action to discipline anyone who abandons their classroom responsibilities.”

But Unifor and the Ontario NDP commended the students who protested the cuts on Thursday.

“Ontarians, including high school students, are organizing massively successful grassroots actions to demonstrate opposition to the Conservatives’ devastating agenda,” said Naureen Rizvi, Unifor Ontario Regional Director. “I commend the brave young activists who have organized rallies, walkouts, and strikes. Students and teachers deserve respect and acknowledgement from their government, not dismissal and cruelty.”

NDP leader Andrea Horwath said she was standing in solidarity with the students.

To the 80,000 students across Ontario walking out today to demand better and take a stand against Ford’s cuts to your education, I want you to know the NDP Official Opposition has your back.
Thank you for your passion and leadership!#StudentsSayNo #onpoli pic.twitter.com/KehzaTrmSX

“Over the last nine months, Doug Ford has taken aim at public education over and over again,” said Horwath, in a letter to students. “He scrapped $100 million in critical school repairs when schools are literally crumbling across the province. He cut $25 million in education programming that was helping put young people and families on a good path. He made students unsafe by dragging the sex ed curriculum back to the previous century.”

She added that now Doug Ford is removing caps on class sizes, “ripping” $1 billion away from education, and taking 10,000 teachers and educators away from students.

“You deserve better,” said Horwath. “You deserve so much better than Doug Ford and a government that takes away from you, so they can afford to give more to their wealthy friends and insiders.”

Another mass “Rally for Education” is scheduled to take place at Queen’s Park in Toronto on April 6, starting at 12 pm.

At the time of publication, over 5000 people were expected to attend the rally.

“As parents, educators and concerned community members we are standing together to defend high-quality publicly funded education and the optimal learning conditions that all students need and deserve,” reads the event post.

“The Conservative government is proposing cuts that will be damaging to all students and will particularly hurt students with special needs. Our message is simple: Our education system needs investment not cuts.”