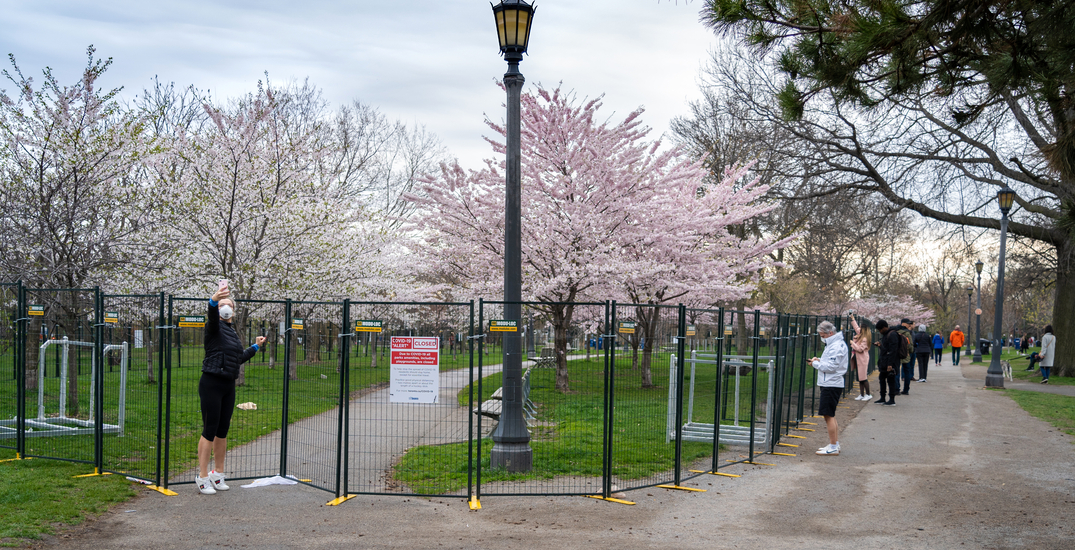 The City of Toronto was forced to install stronger fencing around a grove of cherry blossom trees in Trinity Bellwoods Park after sakura spectators mangled the original barrier.

A spokesperson for the city told Daily Hive that parkgoers had knocked down the orange “snow fencing” that enclosed the trees, just days after it was installed.

“Removing fencing in parks is an offence under the City’s Parks Bylaw.”

The trees, which are located towards the north end of the park, are now surrounded by tall metal fencing, akin to what encloses the main grove, near the park’s southern gates.

Toronto Police and by-law enforcement officers will be continuously visiting parks and the waterfront to ensure people are complying with the Stay-at-Home order, Gonsalves said.

Patrols will focus on areas that have “traditionally been of greatest concern,” including Trinity Bellwoods Park, High Park, and other areas where cherry blossom trees grow.

Although both parks will remain open throughout the trees’ peak bloom, the city has, for the second year in a row, fenced off the Sakuras to discourage the large crowds that often gather for the spring spectacle.

“A coordinated team of enforcement officers and members of the Toronto Police Service will be stationed in High Park to prevent vehicle access and deter people from crowding near the fencing,” Gonsalves said.

“Similar measures could be taken at Trinity Bellwoods Park if deemed necessary.”