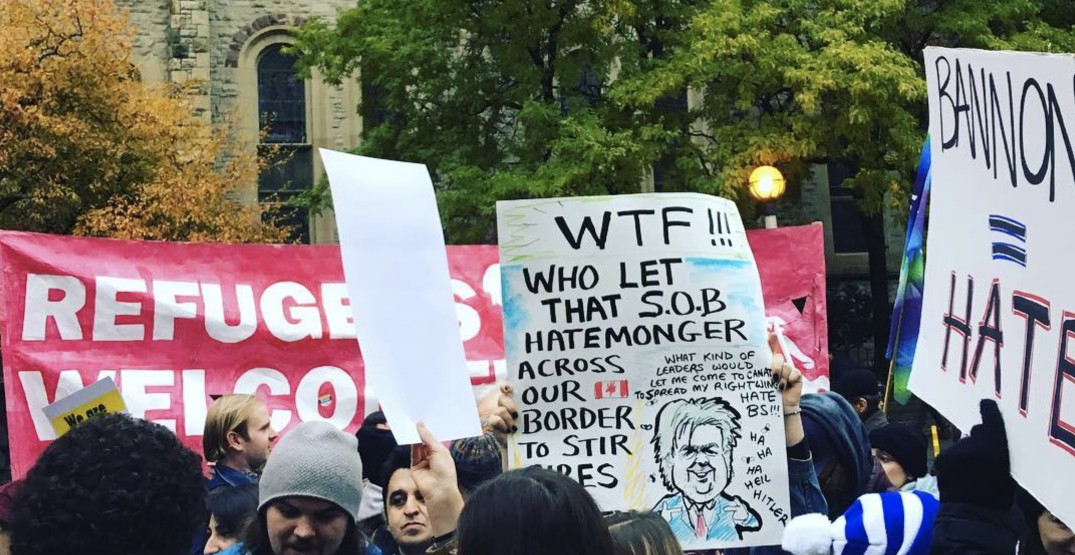 Demonstrators have appeared in full force outside of Roy Thomson Hall to protest former Trump strategist Steve Bannon, who is in Toronto for tonight’s Munk Debate.

Protesters came ready with signs and posters to send the message that Bannon – known for his controversial, right-wing views – is not welcome in the city.

Bannon is attending the debate to speak about the rise of populism. The event will also be hosting former speechwriter and special assistant to US President George W Bush, David Frum, who is speaking against populism.

“Throughout the Western world, politics is undergoing a sea-change. Long-held notions of the role of government, trade and economic policy, foreign policy and immigration are being challenged by populist thinkers and movements,” reads the event details.

“Does this surging populist agenda in Western nations signal a permanent shift in our politics? Or, is it passing phenomenon that will remain at the fringes of society and political power? Will our politics continue to be shaped by the post-war consensus on trade, inclusive national identity and globalization, or by the agenda of insurgent populist politics, parties and leaders?”

The Munk Debate will move the motion: Be it resolved, the future of western politics is populist, not liberal.

“I want to bring everything crashing down and destroy all of today’s establishment,” said Bannon in his debate bio.

Dozens of pictures from the protests have been posted on social media – and it looks like crowds won’t be dying down anytime soon.

Anti-Bannon protest has shut down Simcoe Street outside of Roy Thomson Hall. pic.twitter.com/FzxRevgS7I

Anti-Bannon protest has shut down Simcoe Street outside of Roy Thomson Hall. pic.twitter.com/FzxRevgS7I

At @roythomsonhall protesting the Munk “Debate” featuring Steve Bannon. We do not support racism, hate and exclusion as part of “free speech”. Human rights are not up for debate. Give no platform to hate. #NoBannoninTO pic.twitter.com/5S6bqafcv7