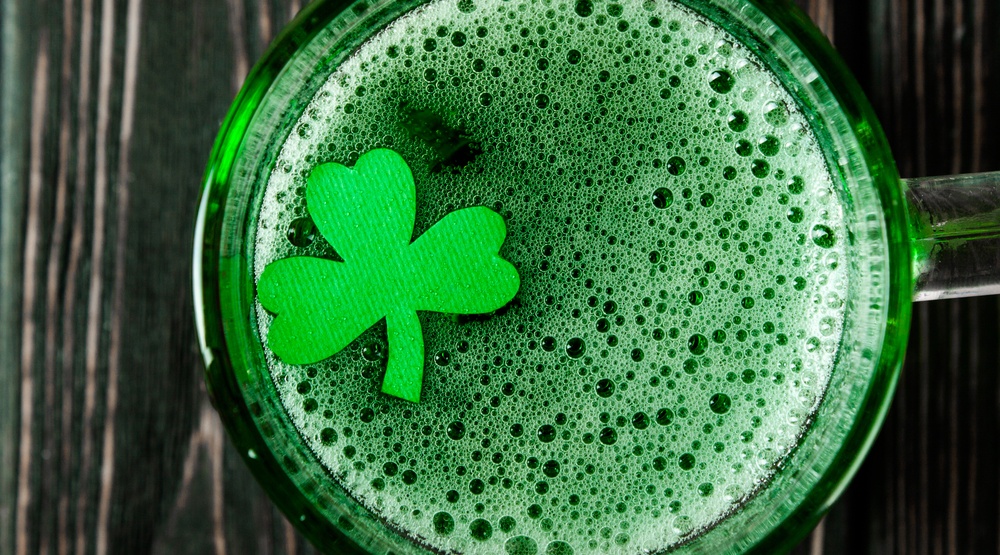 The annual celebration falls on a Friday this year offering the perfect excuse to kickstart the weekend and get your good cheer on a little early.

Here’s where to celebrate St. Paddy’s Day in Toronto.

Spend St. Paddy’s day at this 14,000 square foot facility on Toronto’s lakeside where festivities include live bands, video DJ battles, a fiddle, a free pancake breakfast in the morning, Irish entertainers, BBQ, pizzas, and more. Tickets are on sale now from $25.

This St. Party’s Day beer crawl meets up for a few beers in Liberty Village before loading up a bus and heading west to GLB and then Big Rock Brewery in Etobicoke.

Start pretending your Irish early with practice days in advance of St. Paddy’s Day proper. Shots of Bushmills, Baileys, and pints of Guinness will be on special the week of St. Patrick’s day, culminating in a three-level bash on the Friday. Over weekend, return to recover with brunch and a customizable caesar bar.

Start your weekend off early at the biggest St. Paddy’s Day party on King West which kicks off in the afternoon. Tickets ($10 to $15) are on sale now for festivities featuring live music and DJs, flip cup + beer pong, and special food menu. Dressing in green is encouraged.

Toronto bartender, Aaron Male has crafted a Jameson and tea-spiked take on his grandmother’s favourite, cream sherry, to celebrate St. Paddy’s Day this year. Order one up at the bar to celebrate the Irish tradition with whisky mixed with sweet and nutty Irish flavours.

Fortify yourself before the big day with “Practice Days” at this Corktown bar where Bushmills, Baileys and Guinness pints will be on special in the days before St. Paddy’s. On March 17, live music gets the party started at 5 pm, then return over the weekend for brunch and a build-your-own-caesar bar to aide in the inevitable recovery.

St. Paddy’s Day pancakes for the first 100 people through the door and then look forward to a full day of Irish Party Favours, live bands, snacks, dancing, and DJs at this downtown bar.

Go Full Irish at this newly opened pub and kitchen where a week’s worth of festivities includes drink specials from March 14 to 16; a big St. Paddy’s Day party complete with live music DJs, retro pinball machines and shuffleboard; finally, brunch complete with a Caesar bar on the weekend.

This decidedly queer take on St. Patrick’s Day celebrations will take over The 519 for a bash complete with live music, Irish-style pub fare, a games room, and more.

Expect plenty of Guinness and Bushmills pouring all day as live bands grace the stage from noon onwards at this local inviting anyone and everyone to pretend to be Irish for the day.

This massive pub in The Annex is expected to overflow with drink deals, live music, DJs, and dancing on all nine floors.

Tickets ($69.99) are on sale now for this annual St. Patrick’s Day Brewmasters Dinner hosted by Mill Street’s own Head Brewmaster Joel Manning. On the menu, a 5-course feast with beer pairings and live music.

Get a head start on St. Paddy’s Day at “Practice Days” held between March 14 and 16 look forward to drink specials on Bushmills, Baileys and pints of Guinness as St. Patrick’s Day approaches. On the big day, look forward to live performances, followed by a build-your-own-caesar bar and brunch offered throughout the weekend.

Also hosting “Practice Days” between March 14 and 16, this Bay Street public house will offer $4 Bushmills or Baileys as well as $7.50 Guinness Pints in the lead up to the big day. On St. Patrick’s Day proper, expect live music and DJs from 4 pm, followed by a “Recovery Weekend” featuring build-your-own-caesar bar on March 18 and 19.

This pub on Dupont will be pouring shots of Bushmills, Baileys, and pints of Guinness on special before the big day. On St. Patrick’s Day, the party starts at 4 pm with live musical guests, while the “Recovery Weekend” promises brunch and build-your-own-caesars.

Get lucky at this rowdy Shamrock Shaker celebrating the Irish holiday with a little country-style twang. Green beers, shamrock shooters, bull rides and dancing are on the agenda. Tickets are available now or for sale ($14) at the door.

Tickets are on sale now ($20 in advance, of $25 at the door) for this annual St. Patrick’s Day party at Steam Whistle Brewing. Get lucky here with brewery-fresh Pilsner, eats from the Irish Embassy, Irish dancers and foot-stomping, and more.