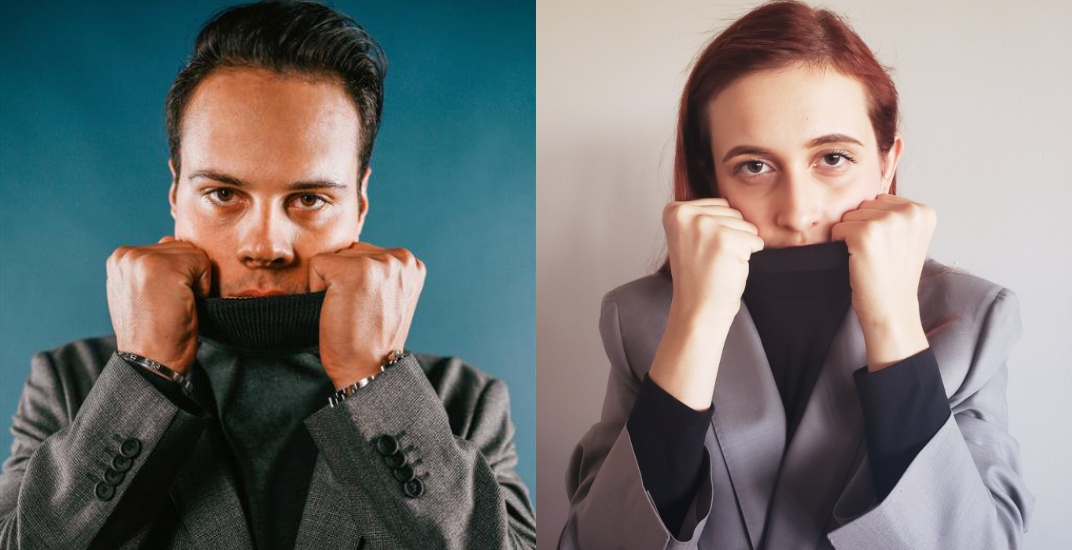 There’s nobody hotter in the NHL right now than Auston Matthews. Not only on the ice, but in front of the camera in a “Zoolander runway model” kind of way.

With 16 points in nine games, Matthews is the league’s leading point-getter, but he also garnered attention for his recent photoshoots with GQ and Sharp Magazine. The spreads feature the Leafs’ centre away from his natural habitat at the rink, where he trades his skates for a few turtlenecks.

Toronto sports fan Victoria Popov took notice of Matthews’ photoshoot and was compelled to meticulously recreate each pose, down to every last detail. Armed with a blazer and a turtleneck, she painstakingly began putting together these faithful recreations.

Move over Ingrid Bergman, I’ve got a new style icon: @MapleLeafs‘ @AM34.

I was very inspired by his @GQStyle photoshoot. So I recreated every… single… photo.

When you’ve got an ice-induced headache and @Marner93 doesn’t have an Advil. pic.twitter.com/KUMtqv4Ls6

“I was kind of amused by the juxtaposition of a burly hockey player wearing high fashion,” Popov told Daily Hive. “I was thinking of getting a turtleneck anyway, but then I thought ‘it would be funny if I got a turtleneck and recreated this.'”

What began as a one-off project soon spiralled into a secondary photoshoot at the encouragement of her Twitter followers. Popov said she enlisted several friends to help her pull off these portraits to perfection.

A Leaf amongst the leaves. pic.twitter.com/YTRD2bBmok

“I had Twitter friends bring clothes over to lend to me for the picture. I had another friend who drove over from Whitby to my work in her car so we could find a parking lot to take one of the pictures.”

From the backdrop, to the clothing, to the poses … they’re very faithful to Matthews’ originals in GQ and Sharp Magazine. Where the Leafs superstar had an expensive wardrobe at his disposal, Popov used her creativity and some craft supplies to produce a similar look at a fraction of the cost.

Her most inventive reproduction was using sleeves of packing plastic and painting them green to look like a designer vest.

Girl, are you a puck?

“I work at a bookstore and I asked people to keep the packing plastic from our boxes to make a vest out of it. His vest cost $2,500 and mine cost 67 cents, which was the price I paid for the paint at Michael’s.”

Just waiting for the C and I’ll have the whole alphabet pic.twitter.com/30tukucqCe

Again, Popov went to the arts and crafts department and used construction paper and Bristol board to mimic the nearly $1,700 jacket that Matthews’ wore in his photo.

“We were standing outside of the Sheraton with a huge piece of Bristol board as I hastily cut an ‘L’ out. We taped it on with scotch tape and the rest was Crayola construction paper taped on the inside to make the red lining. The thriftiness was key to all this.”

For whatever reason, Matthews stood on top of a car in a red overcoat in the most talked-about photo from his shoot. Popov braved high winds and used a red thermal blanket to replicate the original photo.

“If you take a look, I’m standing at an angle because I was too scared towards the centre of the roof, so I just stayed towards the end. It was super windy that day and the thermal blanket was whipping wildly in the wind.”

@AM34 did another photoshoot. Y’all @ ed me asking for another recreation. I obliged.

When you can’t hear the sound of the haters over all the goals you’re scoring. pic.twitter.com/dHDrEYelmX