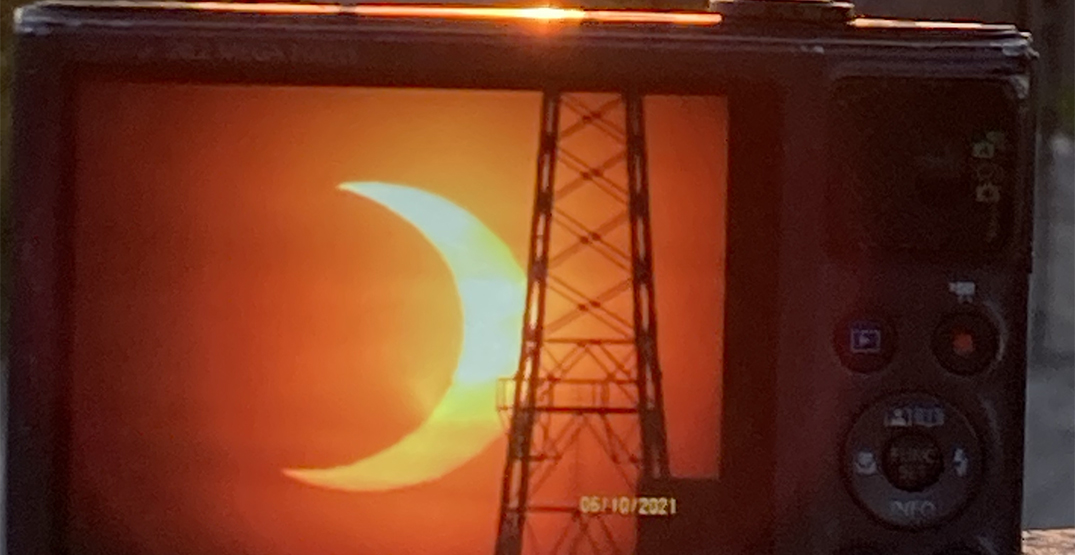 There was a brief solar eclipse in Toronto early Thursday morning, and some local sky-gazers captured stunning images.

The moon passed briefly in front of the sun just after sunrise, temporarily giving the sun a crescent shape in southern Ontario.

Torontonians who captured images were definitely early birds — the eclipse peaked at 5:40 am.

Partial solar eclipse as seen from the Toronto lakeshore. An absolutely incredible morning. For once, I embrace seagulls in a shot. pic.twitter.com/8xhXUpfaAG

I’ve enjoyed many coffees with sunrise before but this was my first with a solar eclipse!
Best I could get with my cell phone just a moment after its peak (had to wait for sun to rise above some clouds). Wonderful start to the day! #eclipse #ringoffire #Toronto #6ix pic.twitter.com/aoCRbitzC8

This morning’s partial solar #eclipse over Toronto with the #CNTower. Hope you like it… https://t.co/BFyxFFw2DE for all of my night sky pics. #Eclipse2021 #solareclipse2021 #ShareYourWeather #PartialSolarEclipse 💕📷 pic.twitter.com/oHHUdW8eGx

The eclipse was visible for many Canadians in the eastern half of the country, but the amount of sun the moon eclipsed varied depending on where gazers were located.

When the moon passes completely over the sun creating an effect known as the “ring of fire” it’s called an annular eclipse. Toronto didn’t see that, but people up north in Iqaluit could.

On Thursday, June 10, an annular #SolarEclipse will travel from Canada to Siberia via the North Pole. Find out at what time this eclipse will occur depending on your location. 👇 Yes! You’ll have to get up early 😉! pic.twitter.com/1cQXlo1qRR