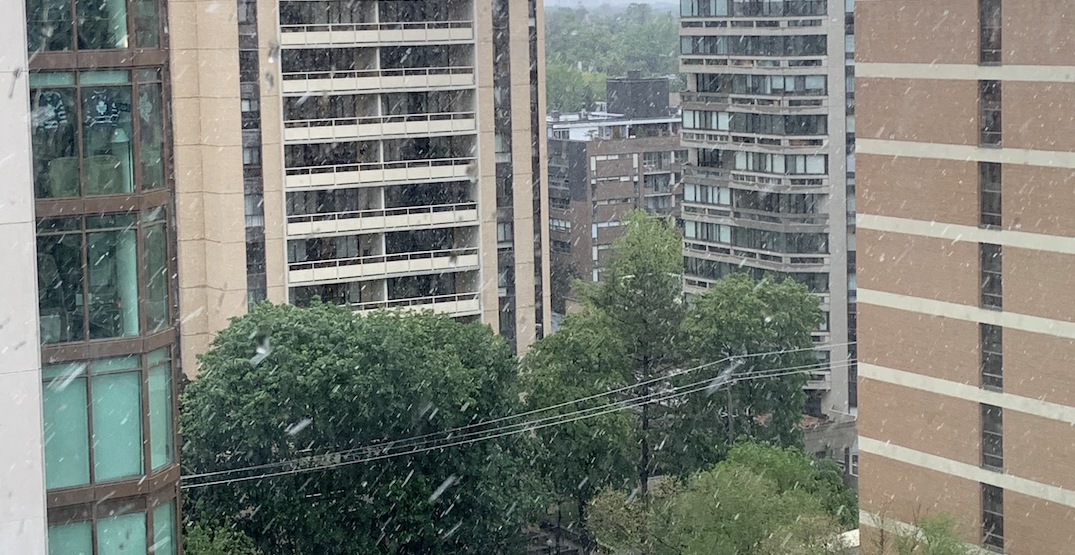 Well, it’s snowing in Toronto. Within a span of a week, the city has experienced summer-like temperatures and now, snow in May.

Due to a low-pressure system tracked in southern Ontario on Friday morning, parts of the GTA are experiencing wet snow, freezing rain, and even ice pellets, according to The Weather Network.

“This pattern of a ridge to the north and low tracking to the south of the Great Lakes is your typical pattern where you can get freezing rain and ice pellets. This setup would be quite normal in the winter,” Nadine Hinds-Powell, a meteorologist at The Weather Network, said.

“What is unusual though is that it is this late in spring and the cold air intrusion into the moisture is this far south in Ontario.”

Residents in the city managed to capture the scene from their windows and shared their displeasure of the weather event on Twitter.

“Toronto, what the heck is going on?” a Twitter user said.

But really, what IS going on?

Pretty sure *snow was not part of last nights weather forecast for Toronto … but here we are. @AnthonyFarnell @Ross_Hull pic.twitter.com/6hb2XrlF8i

Should I write or watch in awe as the snow falls in late May in the Greater Toronto Area?#snowing #Toronto #weather #WeatherForecast #GTA #WritingCommunity #author #books #iamwriting #fridaymorning #FridayMotivation pic.twitter.com/sKJPVicj3Z

Toronto, what the heck is going on? #snow on May 28 pic.twitter.com/LnukSaDpD8

My May 28 snow view 🥶 hoping all of your gardens survive 🌷🌷🌷 #toronto pic.twitter.com/HbVSLbwLB4

Snow in may Toronto pic.twitter.com/QvofbemYYY

Last week Toronto experienced several consecutive days of hot summer-like weather before Victoria Day. It was so hot that temperatures managed to linger above 30°C.

In western Canada, Alberta also experienced some snowy action last week while Toronto was basking under the sun.

Temperatures in the city are expected to remain relatively low but it won’t be until next week that Toronto will feel above 20°C.

So much for a warm start to June.