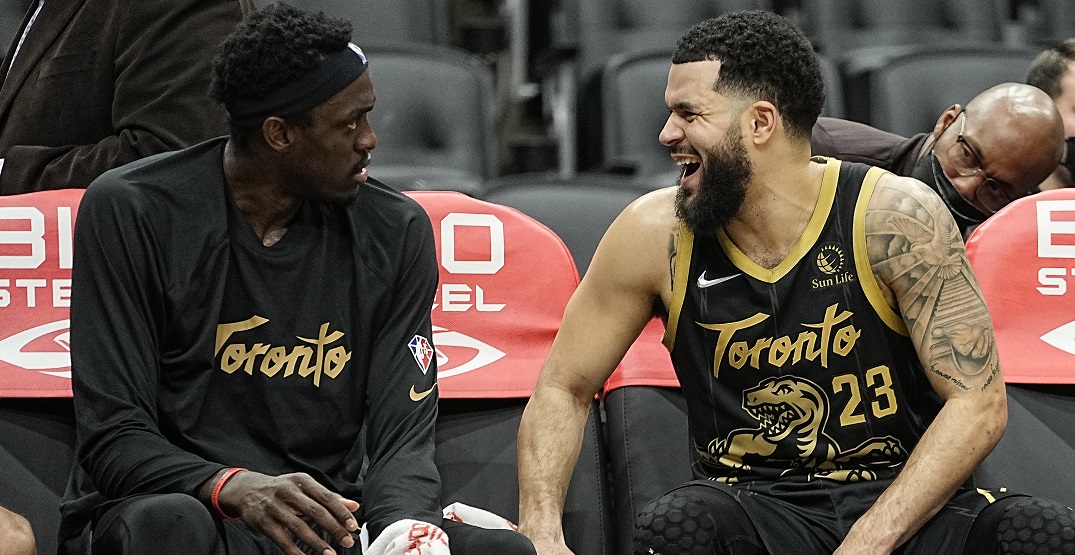 Back in 2016, Siakam was the Toronto Raptors selection at 27th overall in the first round of the draft, while VanVleet joined the team shortly after as an undrafted free agent.

The pair spent time together coming into the league as rookies and teamed up for a G League Championship back in 2017 with Raptors 905, where Siakam won Finals MVP.

Both played major roles in Toronto’s 2019 NBA championship — and were heavily rewarded with four-year deals that kicked in last season. Both now 27, they carry more NBA experience than any other Raptors regular.

With just about every other key piece from the championship roster departed, the Raptors are Siakam’s team. He’s the highest-paid player on the roster, the team’s only former All-Star (unless you’re counting the absent Goran Dragic), and carries more starting experience than any other player. Each of the last two seasons, Siakam had led the Raptors in scoring while finishing second on the team behind Kawhi Leonard in 2018-19.

But they’re VanVleet’s Raptors, too — he’s now leading the team in scoring for the first time in his career, the main face of Toronto’s all-star campaign, and he’s become the defacto “captain” of the roster as the team’s starting point guard.

“He took Kyle Lowry’s spot now,” former Raptor Jonas Valančiūnas told reporters yesterday. “He’s a court captain. He’s proved that he can be a leader on and off the court and be a vocal leader.”

“It definitely reminds us of old times,” Siakam said following Sunday’s 105-101 win over Valančiūnas’ New Orleans Pelicans. “It feels good. And I think when we’re all rolling and playing well, it’s fun.”

When bringing up his favourite memories with VanVleet, Siakam shouted out the “bench mob,” the nickname for the secondary unit that he and VanVleet used to run back in 2017-18 as one of the league’s most fearsome backup squads.

“And obviously, the championship,” he added.

Looking at the present, though, the Raptors have won their last six games, climbing all the way to seventh in the Eastern Conference. They’re just half a game off of Cleveland for sixth in the East, a matchup that would currently see them take on Lowry’s Miami Heat in the first round of the playoffs.

The Raptors have won 6 in a row. pic.twitter.com/3mdw2KKalq

“We’re getting better as a team. And, it’s translating to wins right now,” Siakam added.

It’s true: these Raptors are different than any Toronto team before them. But it’s two familiar faces in Siakam and VanVleet that are driving the team’s resurgence after a 27-45 campaign last year.

“I think that we’ve always been a winning organization,” Siakam added. “That’s what the Raptors are about.”

“It’s fun, man,” Siakam said. “We have a young team. We go out there; we enjoy it, we don’t take it personally… it’s all about winning.”

Coach Nurse had high praise for VanVleet, averaging both a team- and career-high 22.0 points per game.

“He’s becoming a primary scorer,” head coach Nick Nurse said. “So now we’ve got to figure out ways to make sure we can get him the ball. [We’ve] got to make sure we’re all set to play when they blitz against him, which we’re going to see more of. That’s what we’ve been trying to do on our off days.”

Siakam said he’s fine adjusting to a different role in the offence that has caused him to sometimes become more of a playmaker. He’s picked up five or more assists in each of the last seven games, a big jump from his career average of 2.8 dimes per night.

“I should be able to make good decisions and make everyone better. If [I’m being asked to score], that’s what it is,” Siakam said. “And if not, I’m just putting everyone in the right spots. When I have that ability to make plays, I feel like the ball should be run by me.”

Siakam said that he, VanVleet, and the rest of his teammates have been bouncing around ideas on how to evolve the Raptors’ offence all season.

“We learn from each other, and we continue to get better,” Siakam said.

The Raptors, and Siakam in particular, faced many questions about their ceiling coming into this season. Siakam was subject to trade rumours, while the Raptors were projected by some as a lottery team.

And while there’s still over half the season left to be played, Siakam knows there’s a simple way to keep the noise away.

“When you’re not winning, everyone is mad, and everyone is in their feelings,” Siakam said, “And when you win, it’s a different atmosphere.”