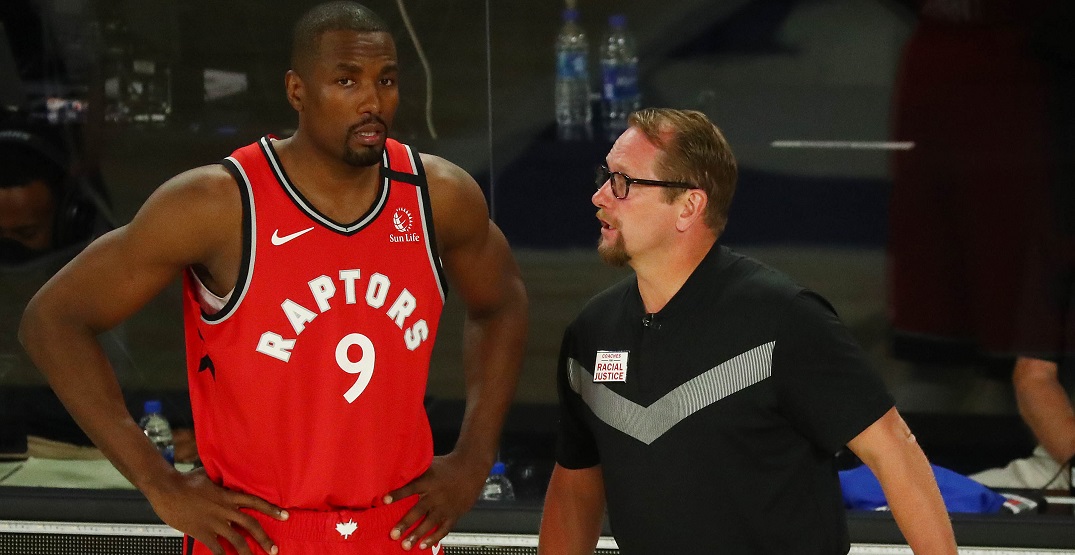 Serge Ibaka will forever be a part of Toronto Raptors lore.

But that hasn’t stopped him from being the target of a few jokes.

Set to play in Toronto tomorrow for the first time since leaving for the LA Clippers in free agency prior to last season, the 2019 NBA champion got a little ribbing from his old teammates at Thursday’s practice.

“I’ll probably put him in every ball screen I can tomorrow just to test him out. He’s looking a little old these days,” Raptors guard Fred VanVleet joked.

Now 32, Ibaka is in his 13th NBA season with his fourth team.

VanVleet himself was at his first practice back after clearing from COVID-19 protocol. VanVleet, Pascal Siakam, OG Anunoby and Chris Boucher are Ibaka’s four remaining teammates from his four seasons in Toronto.

“When Serge got going and was kind of in his A-game element, man, we hardly ever lost,” Raptors head coach Nick Nurse said.

When asked about a quintessential Ibaka moment,  Nurse shared a story about a speech he gave while the Raptors were down 2-0 to the Milwaukee Bucks in the 2019 Eastern Conference Finals.

“Serge asked me if he could speak to the team before we started the film session,” Nurse said. “He got up there and said that [he was] in this situation before.”

Ibaka referenced his 2012 Western Conference Finals appearance with the Oklahoma City Thunder, where his team fell down 2-0 to the San Antonio Spurs lineup filled with talents like Tim Duncan, Manu Ginobili, and Tony Parker, as well as future Raptors teammates Kawhi Leonard and Danny Green.”

But it appears that VanVleet did appreciate the wisdom after all.

“Once we won, we could look back and say, ‘Damn, Serge did tell us when we were down 0-2.’ You look back and say, ‘Oh man, he was a genius the whole time and nobody was listening.’ It was great, man,” VanVleet. “It was great for him to share his experiences. It made it funny because Kawhi was in the room, and (Serge) was telling us about when they came back to beat Kawhi and Danny. It was a good, light-hearted moment after we were feeling crappy about being down 0-2. We ended up climbing out of the hole, and a big part of that was him, obviously.”