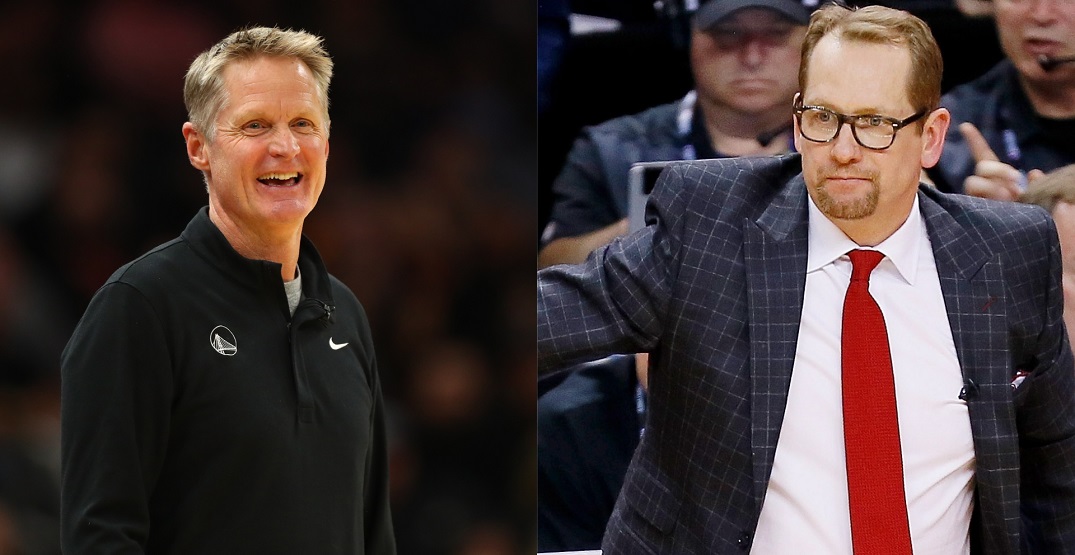 Kerr and the Warriors were in Toronto on Saturday in their first visit to Canada since the 2019 NBA Finals, where the Raptors came out on top in six games to win their first championship.

It’d be a massive understatement to say much has changed for both teams since that series.

With Pascal Siakam (as well as Dalano Banton) having been added to the league’s COVID-19 protocol prior to tip-off, Fred VanVleet was the only Raptor playing on Saturday night who suited up in the 2019 Finals.

On the second night of a back-to-back at the end of five-game road trip, the Warriors sent nearly half their roster directly home, partially as a precautionary measure due to the rising number of COVID-19 cases both in Canada and across the USA.

Eight Warriors: including Stephen Curry, Draymond Green, and Andre Iguodala — didn’t even make the trip to Canada, with just Kevon Looney representing the Warriors from the 2019 team.

The Warriors currently sit second in the Western Conference with a 24-6 record, with Saturday’s contest being their largest margin of defeat on the year. After missing the playoffs in each of the last two years, the Warriors currently have the second-best odds at the 2022 NBA title.

The game itself was as chaotic as you’d expect from one with one of the teams essentially putting out their “B” lineup, with Toronto coming out on top by a 119-110 score. Scotiabank Arena was operating under 50% capacity on the evening, with an announced attendance of 7,988.

But amidst all the chaos, one constant remained: Kerr’s duel with Raptors head coach Nick Nurse.

Kerr was named the NBA’s coach of the year in 2016, while Nurse was awarded that honour in 2020, both each a year removed from their first championship as a head coach.

“The way this league works, we all sort of steal from each other,” Kerr said when asked about his thoughts about Nurse’s coaching style. “I think Nick has been very influential in this league. The way the Raptors play defence, the way they search for deflections and the way they think about passing lanes mentally. They clearly have an identity and a style and that kind of comes directly from a great coach.”

In particular, Kerr shouted out the box-and-one defensive scheme Toronto used in the 2019 Finals, which he said “everybody knows about” once Nurse began implementing it.

With four of the players on the floor playing zone defence, the name of the box-and-one comes from the fifth playing man-on-man coverage on the team’s best offensive threat, notably used by Fred VanVleet on Steph Curry during the Finals.

The box-and-one phrase has even made its way onto Nurse’s official merchandise.

This year, Nurse has been forced to experiment with several different starting lineups for the Raptors due to injuries and the fact the team doesn’t have a single player listed above 6’9”.

“He’s just a very creative coach,” Kerr added. “You know, he’s coached for a long time and he’s coached in a lot of different moments. And he’s used that experience really well. So he’s not afraid to throw crazy schemes out there.”

Nurse was quick to throw the praise back at Kerr, who is the third-longest tenured head coach in the league, having won three titles with the Warriors.

“You don’t have this level of success unless you’re doing all phases of the game really well,” Nurse said of the Warriors. “They do a lot of things that you could call model basketball.  They really guard they do it consistently. They really play with pace consistently. The ball moves on offense [well].”

Kerr said the Finals were a “devastating series” to the Warriors due to the injuries sustained by Kevin Durant and Klay Thompson.

Durant, who tore his Achilles, has since returned to MVP-level form with the Brooklyn Nets (before going into health and safety protocols himself this week). But Thompson has yet to return to NBA action following an ACL tear suffered in the finals and Achilles injury of his own during a 2020 workout.

“It seems so long ago,” Kerr said. “It’s hard to believe that Klay is still recovering from that.”

But the memories weren’t all bad for Kerr.

In particular, Kerr shouted out the Raptors fans prior to Game 1 of the Finals.

“That was a pretty incredible time here,” Kerr said. “I’ll always remember the national anthem… hearing all the fans stand up and singing the Canadian anthem. It’s just a beautiful moment.”

“I always love coming back to Toronto,” Kerr said. “It’s one of the great cities in the world and to come visit is fun and playing in this building, it’s always fun. There’s a love for the game here.”