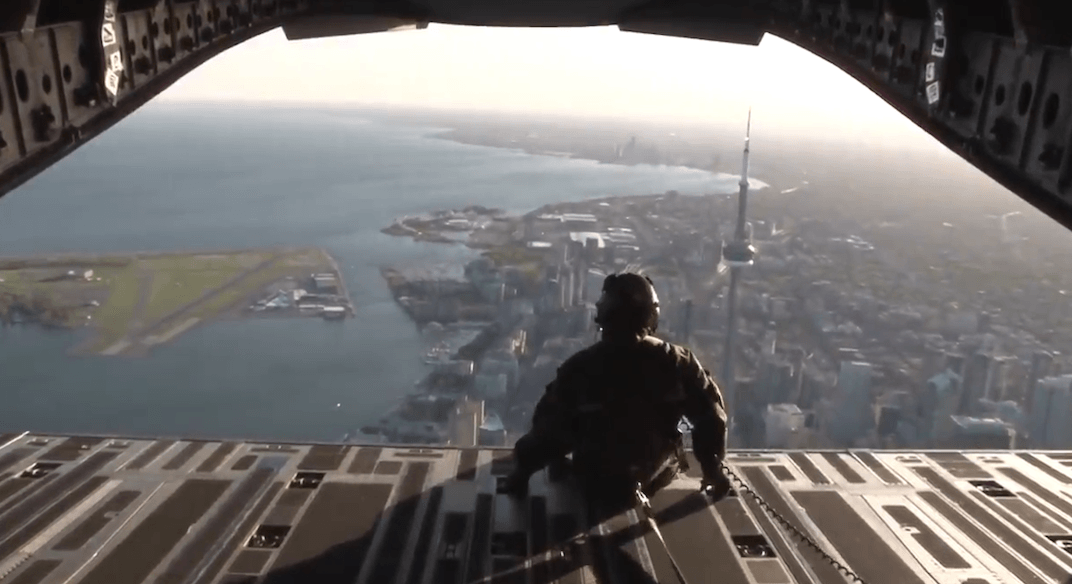 As the Toronto Raptors prepared to take on the Golden State Warriors for Game 2 of the NBA Finals on Sunday, all eyes were on the sky.

Just before tip-off, the Royal Canadian Air Force (RCAF) conducted a flyby over Scotiabank Arena and the Jurassic Park fan zone — so in case you thought you heard a really low-flying plane you weren’t imagining things.

Around 7:45 pm, a CC-177 Globemaster aircraft from 429 Transport Squadron at 8 Wing Trenton, ON., took to the sky to mark the second home game of the NBA Finals.

The aircraft flew over the arena at an altitude of no lower than 500 feet above the highest obstacle on the route.

According to RCAF, flybys are carefully planned and closely controlled for public safety, and are dependent upon weather and flying conditions.

RCAF shared a video of the flyby, which shows the rear hatch of the large cargo plane open as the city skyline comes into view.

A crew member can be seen sitting on the edge of the plane, waving to the city as the CN Tower looms in the distance.

In case you didn’t catch a glimpse of the plane yourself, here’s what you missed…

#Megaplane moment caught on 🎥 …
You may have seen our #RCAF CC-177 Globemaster aircraft last evening, from the ground, but here’s the view as it flew over @ScotiabankArena and the @Raptors Jurassic Park fan zone to mark the #Raptors second home game of the #NBAFinals. pic.twitter.com/SGb56WjUDT