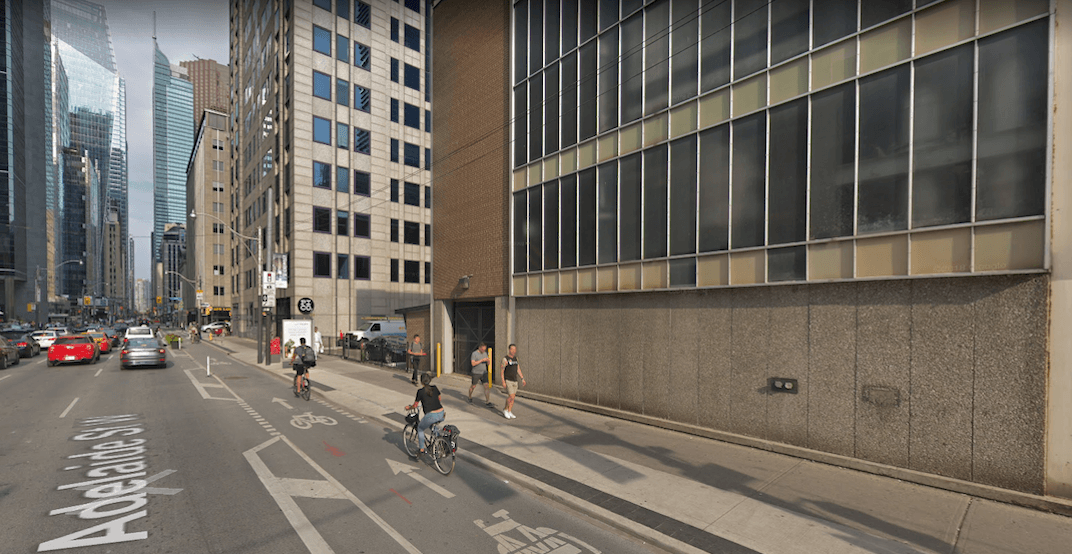 Next week, commuters from around the city are encouraged to participate in Toronto’s 30th annual Bike to Work Day.

On Monday, May 27, thousands of cyclists from various starting points throughout the city will meet up at the intersection of Yonge and Charles Streets at 7:30 am for a group ride to Nathan Phillips Square for a little celebration, coffee, and pancakes before they head to work for the day.

In honour of this annual event, Google Maps has shared a list of Toronto’s best-serving bike paths and cyclist-lanes that run throughout the city.

So, whether you prefer a roundabout route on the Waterfront Trail or cutting through the downtown core on Adelaide Street there’s the perfect trail or lane for every cyclist. 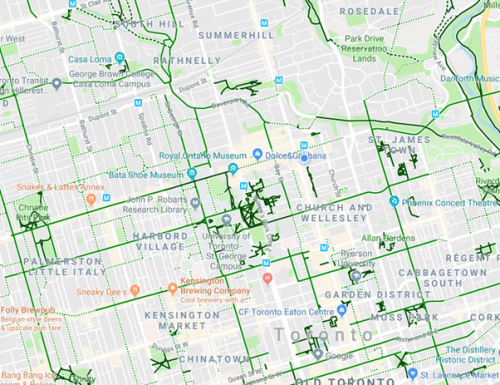 A snapshot of Toronto’s bike lanes on Google Maps

The Beverley and St. George connect is a unique intersection, allowing cyclists to continue either north or south unimpeded as the bike lanes for both streets connect, curving slightly to accommodate the street change at the four-way stop where the two paths meet. This route allows cyclists a lane from Dupont Street to Scotiabank Theatre, accessing many parts of downtown Toronto on the way.

Running south the length of  Toronto, Sherbourne Street provides one of the longest unbroken bike lanes in the city and offers cyclists access to other lanes on Wellesley Street, Gerrard Street, and Shuter Street, among others.

Running through the heart of Old Toronto, Adelaide Street’s bike lane services those looking to cycle to work in the inner city, giving them space from the constant downtown traffic. As a plus, Adelaide’s bike lane connects with lanes on Simcoe, Richmond, and Sherbourne, giving cyclists on their way to in to work some different options and ensuring they get in safe and on time.

A new alternative to the Lower Don trail, the Bayview multi-use trail is actually a bike lane running parallel to Bayview Avenue. Separated from traffic by a guard rail, the two-lane trail leads from Pottery Road past the Brick Works to Rosedale Valley Road. Those who cycle to work in the eastern reaches of downtown Toronto will find this lane invaluable.

Servicing residents of the York neighbourhoods of Briar Hill, Upper Village, and Forest Hill, the Kay Gardiner Beltline follows an old railroad line, making for an easy bike ride. Speed limits are posted to keep cyclists and pedestrians alike, safe on their commute. A bonus: The refurbished bridge spanning over Yonge Street allows passers-by a nice view of the subway trains below.

Another scenic route, the Don Valley bike path gives cyclists a chance to avoid the city traffic and experience a quieter, more nature-filled trip. Don Valley boasts multiple entry points and runs alongside the Don River making for a beautiful, if slightly lengthier, cycle to work.

Formerly known as the Goodman Trail, the Waterfront Trail has three sections: Etobicoke in the west, Scarborough in the east, and Toronto, which forms the central part of the trail through Harbourfront and along Queen’s Quay. The newly-minted two-way bike lane is a great path for cyclists heading towards downtown, who want to avoid crowded city streets and enjoy the fresh air, and some nice views.