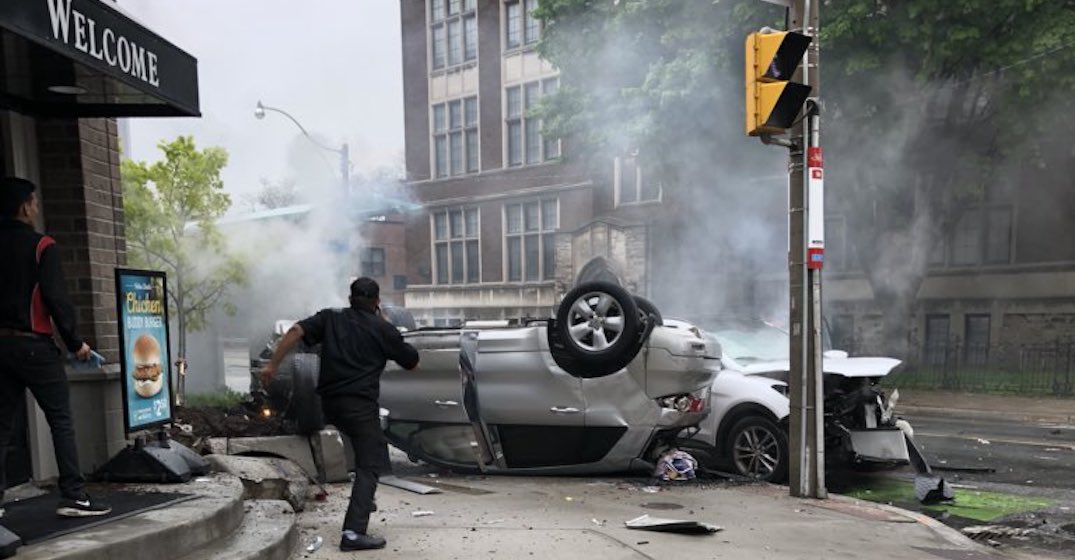 Two people fled the scene of a car accident that caused one vehicle to rollover on Saturday.

The horrific scene took place on Saturday morning at Jarvis and Wellesley. Police said that a possible female driver of the flipped vehicle was reportedly seen fleeing the collision.

According to reports, a Yorkville women’s accessory store was robbed earlier that morning, and police believe those who fled the accident were involved in the theft.

Witnesses in the area captured the aftermath of the accident, and no one was reportedly injured.

OMG I witnessed this horrific crash where all passengers walked away unharmed at Wellesley and Jarvis #toronto #carcrash @ctv_television pic.twitter.com/aMh9AXEcoC

Police said that the occupants of that vehicle that was struck have no reported injuries and “have said they don’t need medical attention.”

@CP24 accident at Jarvis and Wellesley. Police are on scene pic.twitter.com/FfbhaPCgjO

Today I almost got hit by 2 cars while standing at the curb waiting to cross. She ran a red light, hit another car, flipped and flew right onto the side walk. I was shook. #toronto pic.twitter.com/xz5QV6kFg8

Picture of the scene at Jarvis and Wellesley. @cp24 pic.twitter.com/V3ZU2ruNIO