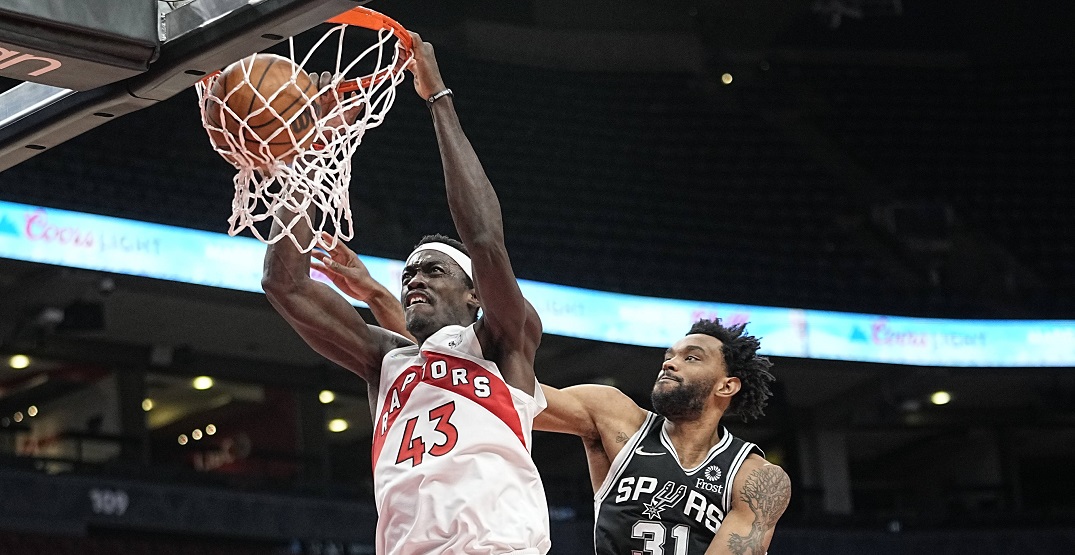 Scotiabank Arena has been without fans for the last three Toronto Raptors games, but any talk of home-court advantage being lost has quickly gone by the wayside.

The Raptors have won all three games by an average of 16 points in front of a mostly empty building due to COVID-19 restrictions.

With their victory over San Antonio last night, the Raptors are now back at .500 for the first time since November, now sporting a 17-17 record.

VanVleet himself has put up 99 points over the three-game stretch, topping at least 31 points on each occasion in one of the strongest stretches of his career.

And right now, the team is perfectly in the mix to go on a long winning run.

Due to various injuries and stints on the COVID-19 protocol list, last night’s starting lineup in VanVleet, Gary Trent Jr., Scottie Barnes, OG Anunoby, and Pascal Siakam has still played just 66 minutes together throughout the season. It’s not hard to imagine the Raptors pulling it all together as they continue their ascent up the standings.

Still, there are some blips in the road to having a full roster. Bench players Svi Mykhailiuk and Yuta Watanabe were added to the COVID-19 protocol list yesterday, but the Raptors are confident they are on the way to continue to climb up the standings.

“I’m not asking for perfect health before we start going on a good chunk of winning more than we’re losing,” Nurse said. “But I think if we got most of our people here, we feel like we can win more than we lose by a significant amount.”

The team sits ninth in the East but is just two games behind the sixth-placed Cleveland Cavaliers (21-17). With the top-six teams in the conference guaranteed a playoff spot while teams 7-10 are subject to the NBA’s play-in tournament, the Raptors know that there’s a significant advantage to landing in the upper echelon.

“We should definitely be aiming for that top-six,” VanVleet said earlier in the week. “We don’t put too much focus on that as a team, but I think it’s just the reality of the situation.”

With this season tabbed as a rebuilding year by many following the departure of Kyle Lowry, the Raptors have found a way to stay in the Eastern Conference conversation as a potential playoff candidate.

“I’m interested in in this team, you know, getting seeing what it can become,” Nurse added. “I think we all can see signs of that being pretty, pretty decent.”

But the veteran Raptors like VanVleet and Siakam should also know how quickly things can turn sour in the modern NBA. The Raptors reached .500 last season with a 17-17 at the exact same 34-game mark, before a nine-game losing skid derailed any playoff hopes.

On a recent podcast appearance with former NBA player JJ Reddick on The Old Man and The Three, Nurse opened up about the 2019 champion Raptors’ defensive communication skills as a key to their success. Asked Tuesday about how this year’s team compares on that front, Nurse said he’d been pleased with how they’ve been progressing.

“I think that was a super high level and a really special team, obviously,” Nurse said. “They just had a level of confidence that they could [make changes] pretty much on the fly in the heat of big games. We’re getting there with this team as well… I’m seeing some progress here for sure.”

The Raptors face another huge test tonight, facing the rested defending champion Milwaukee Bucks on the road, being listed as a 7.5 point underdog. On Friday, they’ll be taking on the 27-10 Utah Jazz at home, who sport the NBA’s third-best record.

Neither game is slated to be easy, but there’s no better time than the present for the Raptors to show that they’re hitting their stride.