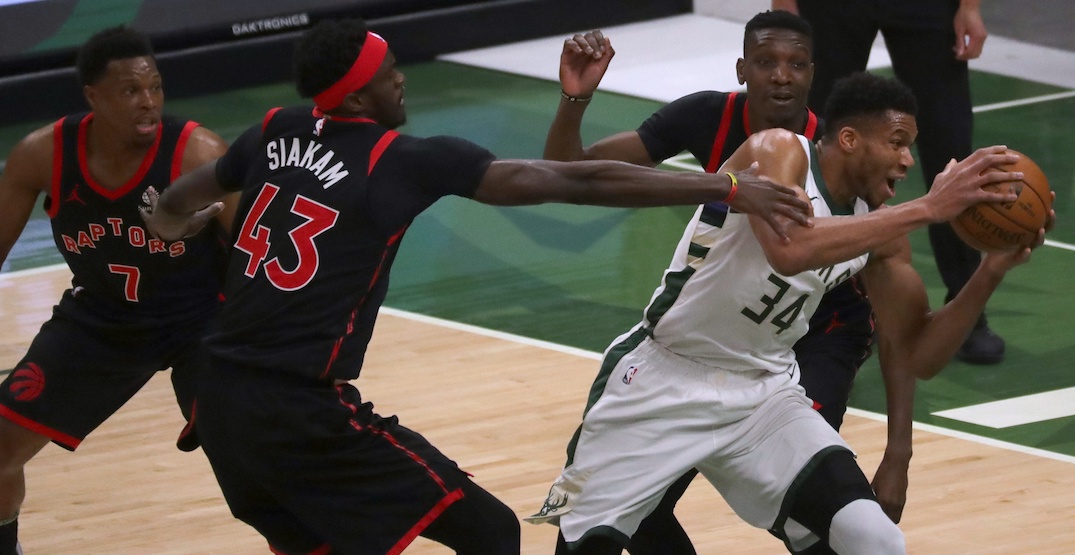 With the Toronto Raptors lacking a true go-to centre this season, the new strategy is to go without one.

Losing veterans like Marc Gasol and Serge Ibaka in the middle has been challenging, and the production from the big men is just not the same as it was in previous seasons.

This season, players who were brought in like Alex Len (who has already changed teams) and Aron Baynes have done an inadequate job at that position. While Chris Boucher has stepped up this season, he’s more well suited coming off the bench.

So when Raptors head coach Nick Nurse unveiled his starting lineup for Tuesday night’s game against the Milwaukee Bucks, it caught some by surprise. Aron Baynes, who had been in the starting lineup for most of the season, was sent to the bench. The return of OG Anunoby from injury moved Pascal Siakam to the centre spot, which bumped Baynes to the bench.

The plan worked, as the Raptors defeated Milwaukee 124-113 with significant contributions from Fred VanVleet and Siakam.

VanVleet put up 33 points with seven assists while Siakam had a double-double with 23 points and 13 rebounds.

So, will a small ball lineup be the answer to this team’s woes moving forward?

“It better be. We don’t have a choice at this point,” VanVleet told reporters after the game. “We are past theories and hypotheticals; you know what I’m saying? It was a good start tonight and it worked. When you win, everything you did worked and when you lose it doesn’t.”

The Raptors’ lack of size did not affect their rebounding ability. Despite the fact that they went up against a lengthy Bucks team that features two-time MVP Giannis Antetokounmpo and seven-foot-tall Brook Lopez, the Raptors managed to out-rebound the Bucks 44-41.

“I think the hardest thing, especially with a guy like Lopez, he’s more like a perimeter type of a big, the only thing you have to really worry about is boxing him out and stuff,” said Siakam. “I think you know for the most part it’s gotta be a team effort. We know we’re undersized, but we just got to go out there and get the job done.”

Not everything from last night’s game was positive as All-Star point guard Kyle Lowry had to leave the game early due to left ankle soreness.

Nurse said Lowry's ankle was just sore after tweaking it a couple times tonight. They'll reevaluate him tomorrow and go from there.

How Lowry is health-wise will be crucial. Nurse seems ready to play small ball more often if he has to, but Lowry is a big part of that strategy.