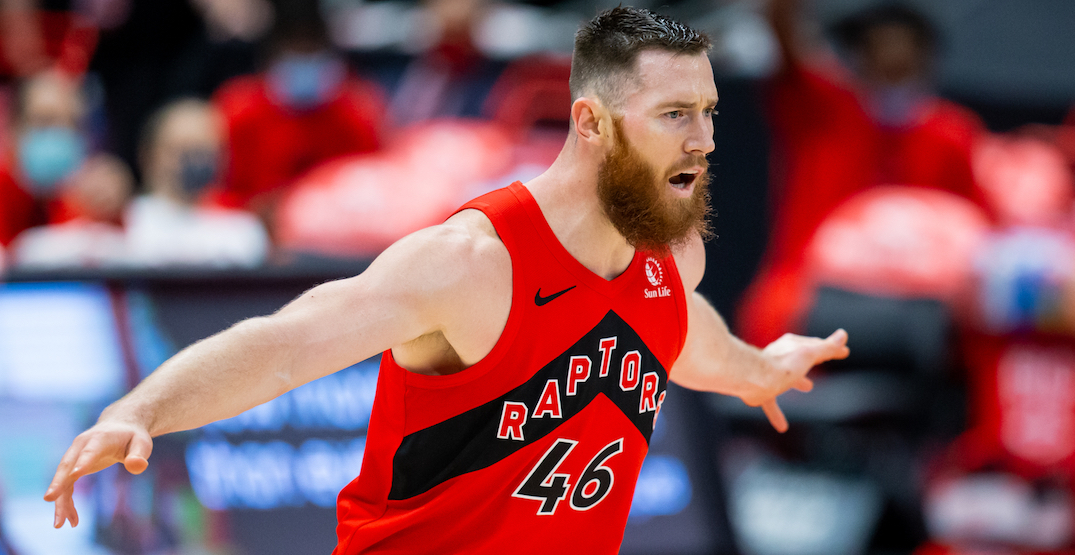 Aron Baynes came into the Toronto Raptors organization with relatively moderate expectations. After the departures of Serge Ibaka and Marc Gasol, the starting centre role was handed to the 34-year-old NBA vet.

Unfortunately for Baynes and the Raptors, since the opening tip of the season he has failed to live up to the responsibilities that come with being a member of the team’s starting five. Despite starting in all 23 games he’s dressed for this season, Baynes has yet to really put together a single standout performance to date. He hasn’t topped 13 points once in a game yet this year, and has touched the 10-rebound mark just once as well.

Though he’s never been a star player in this league, Baynes is struggling mightily to give the Raptors meaningful contributions on a nightly basis.

It’s hard not to wonder what could’ve happened if the Raptors had found a way to keep one or both of the Serge Ibaka/Marc Gasol frontcourt.

Currently sitting at 12-15 and 8th in the Eastern Conference, the Raptors aren’t losing games as frequently as they were at the start of the season. After some fears that they might miss the playoffs, it seems like they’ve righted the ship well enough that they’re currently at a 95% chance to qualify for the postseason (via 538.)

But if they have any hope of being a true contender, the time has come to stop giving Baynes starting minutes, at least for now.

Unpacking how we got here

At the time, Baynes was a sensible enough signing. There was a hole that needed to be filled, and there was not much available on the centre market that had a better pedigree than him.

But with his two-year contract, he was never anything more than a stopgap option, and right now, there is much more that needs to come from the Australian.

Baynes has looked out of place since day one, and it’s been long enough to try something else.

Give Chris Boucher his due

Once a fringe player on the Raptors’ championship squad, the Montreal native has quickly rocketed to fan favourite status with his electric blocks and overall energy he brings to the court each night. He’s had several starring performances over the last two seasons, most notably a 25-point night against the LA Lakers in Staples Center highlight by blocks of both Anthony Davis and LeBron James.

Sure, he’s got flaws to his game like anyone else. But he’s also doing much more off the bench than Baynes is doing in the starting five.

Even if it’s just for a couple games or three, Raptors head coach Nick Nurse should seriously give Boucher a long look and reward him with his first career NBA start. Even if he’s already playing more than Baynes each night, there’s something to be said about the “starting centre” tag that just sounds a bit sweeter.

With the NBA’s assurance that you can’t trade a free agent signing in the first three months of their contract, any immediate help that involves addition by subtraction of Baynes will have to wait until at least February 25.

It’s unlikely that Toronto would offload him so quickly into his tenure, but it’s also hard to believe anyone would look too fondly back on the era if he were to get shipped out rather quickly.

If they’re looking to improve of course, they’d have to find a way to package Baynes with another roster player — Norm Powell, perhaps — and potentially a future draft pick or two.

The Raptors were rumoured to be in talks to acquire former All-Star Andre Drummond from Cleveland, but really, almost anyone would be an upgrade. Baynes is currently 75th in the NBA when it comes to win shares amongst centres. There are only 30 starting spots in the league, and 88 centres that have played this season total. It doesn’t get more clearcut than that.

Lastly, the Raptors can bet that Baynes will turn it around.

Even though he’s far closer to the end of his tenure in the NBA than the start of it, 24 games isn’t that many. But it’s not nothing either, and if they continue to put their stake on a Baynes turnaround, it might get worse before it ever gets better. It could also continue to get worse, and even if Baynes might not be the only one digging the Raptors into holes this season, he’s at least got both hands on the shovel.

There’s still time for Baynes to bounce back. But the clock is definitely ticking.