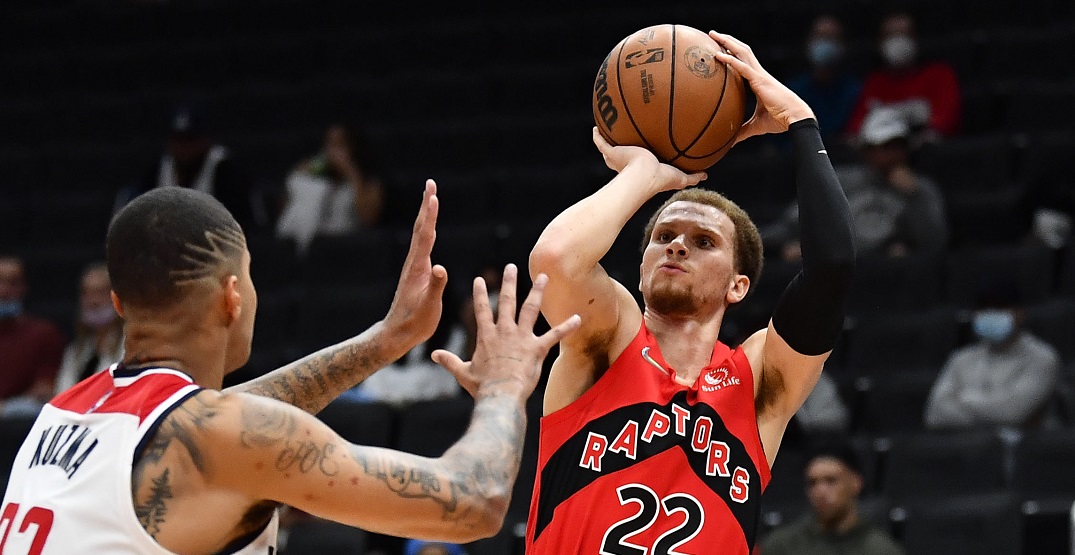 When the Toronto Raptors drafted Malachi Flynn in the first round back in 2020, the future seemed bright for the young point guard.

In his rookie season, Flynn went up and down between the Raptors and their 905 G League team, showing promise of being a regular piece of the Raptors’ rotation.

Toronto cycled through 22 players last year, but Flynn’s 19.7 minutes per game in his 47 games (including 14 starts) ranked ninth on the team. On a 27-45 team that finished 12th in the Eastern Conference, Flynn was often a bright spot for Raptors fans to look forward to.

Fast forward to December 2021, and Flynn, well, isn’t quite enjoying the same amount of success as in his sophomore year.

On a Raptors team that’s even more angled towards youth and development than last year’s squad, Flynn has struggled to make much of an impact this season in his 16 appearances so far.

For Flynn, there are three C’s that are key to him finding success in Toronto: consistency, coaching, and confidence.

Can Malachi Flynn be a good NBA player for the Raptors? Absolutely, and there’s little reason to doubt that potential is his issue.

Multiple performances from last season stand out: putting up 27 points while playing 45:37 in a loss against Indiana last year, a 20-point, 11-assist night in a win over Cleveland, and a 22-point game against Atlanta where he drained six three-pointers.

Flynn has done more than enough to show flashes that he can be an impactful player at the NBA level. But nothing from his 2021-22 season stands out so far. He’s yet to hit ten points in a game this season and has yet to top four assists.

His -24 score over the course of the season sits 14th out of 17th on the team, with three straight games of a -10 or higher rating.

He hasn’t had a ton of opportunities to stand out this year, but he hasn’t had any “can’t-miss” performances while he has played, either.

The worst thing that ever happened to Malachi Flynn’s role in Toronto might have actually been when the Raptors took Dalano Banton in this year’s draft.

Goran Dragic is no longer in the mix for the Raptors after taking a personal leave, but Banton has largely replaced Flynn’s role as the team’s backup point guard.

Banton is actually a year younger than Flynn, and the early returns show that Raptors coach Nick Nurse favours the Toronto native, who has played in all 22 games this year.

This season, the Raptors have used a variety of lineups, but in almost every one, Banton has seen more floor time than Flynn. Ten of Flynn’s 16 appearances this year have been under eight minutes a night.

Flynn is averaging just 8.6 minutes per game this season, 13th amongst Raptors players.

The trend is changing a little, with both Flynn and Banton actually averaging 13.7 minutes each in the last seven Raptors games since November 17.

More than anyone else, Flynn has to regain the trust of Nurse in his rotation. He’s shown signs of that, but needs the performances to follow it up.

Outwardly, Malachi Flynn’s confidence in his own game doesn’t appear to be an issue for the Raptors.

Execution, on the other hand, has faded rapidly. On Tuesday night against Memphis, Flynn took seven three-point attempts, hitting just one of them. It was his worst shooting night of the season, but there haven’t been too many great ones, either.

Flynn has yet to hit more than a single long ball in a game this season this year, shooting 6-24 (.250) from long distance this year, including missing 17 of his last 21 shots.

Of course, 24 shots is hardly a definite sample of a player’s abilities. It’s easy to say that Flynn has shown he doesn’t have a strong three-point shot, but it’s just as easy to point to his rookie success and figure he’ll be able to replicate it at some point.

For now, the best thing for Flynn is likely to keep shooting and hope the shots start to fall a little more.

All is not lost for Flynn.

The 22-year-old rookie Fred VanVleet played just under eight minutes a night for the Raptors back in the 2016-17 season, putting up just 2.9 points per night. A look at the statline doesn’t always offer a full context for a player’s abilities, as sometimes it just takes a little longer for the right fit to line up.

“Obviously, there’s going to be opportunity on that bench for different guys,” VanVleet said this week when asked about Flynn’s role this year. “They’ve just got to stay ready… We’ll need all of those guys going forward.”

With a full 60 games left in the season for Flynn and the Raptors, it’s far from time to panic to see if he’ll have a strong future in Toronto. But the sooner Flynn can get his game going, the stronger the case he’ll have for the Raptors’ brass to believe in his long-term stability with the team.