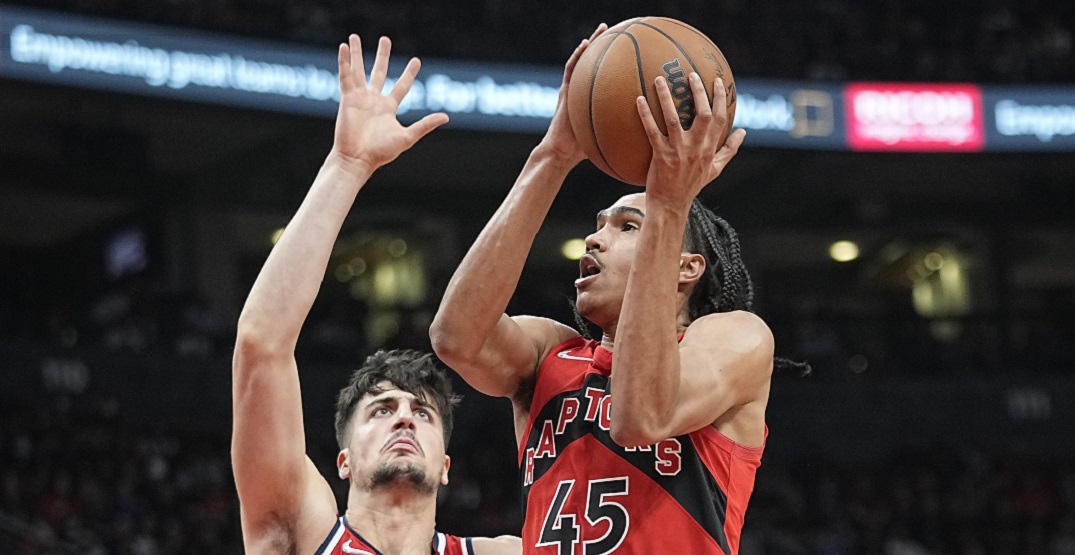 The Toronto Raptors might not have had the best homecoming game, but you can bet it meant just a little bit more to Canadian Dalano Banton in his NBA debut.

The Raptors fell 98-83 to the Washington Wizards and entered halftime down by 20 points. It was an ugly shooting night for the Raptors, as they went just 30-97 from the field.

On paper, Banton’s stat line wouldn’t be anything to raise an eyebrow at. Playing 12 minutes, he earned seven points, four rebounds, and one assist. Of the ten Raptors who played, it was Banton who had the least amount of time on the floor.

But what he did in those 12 minutes was truly remarkable.

With 25 seconds left in the third quarter, Banton entered the game for Svi Mykhailiuk, making history as the first Toronto-born player to ever suit up for the Raptors.

Twenty-five seconds later, Banton had what might’ve been the greatest first NBA basket of all time: nailing a half-court heave to end the third frame.

“I’m grateful that went in,” Banton said. “I’m glad that’s my first bucket.”
After subbing in, Banton played out the entirety of the fourth quarter.
Banton, who grew up in the Rexdale neighbourhood of Toronto, received one of the loudest cheers in the pregame intro.

Best moment of the pregame intros for me comes by way of Rexdale’s own Dalano Banton. pic.twitter.com/AWbApORKK4

“Just to play in front of your home crowd and hear that noise… it was great,” Banton added. “I appreciate all the fans for just loving me and taking me in with such open arms. To see all those seats packed, just to see us play, it was great for us. We’re grateful for it.”

Banton’s #45 jersey number is even a nod to the 45 Kipling TTC bus he used to travel on daily.

Dalano Banton living out our dreams!!!!!

I shed a tear for Dalano

Dalano Banton is the face of the franchise

When Banton entered the game, the Raptors were down 79-55, 24 points. By the time he’d left the court, they’d trimmed the lead to 15. A loss is a loss, but it’s clear Banton was making a positive impact on the court.

“I thought he was a big factor for the improved pace and the improved offence,” Raptors coach Nick Nurse said of Banton’s time on the floor.

Boucher, Banton, and fellow Montrealer Khem Birch helped tie an NBA record for most Canadian players on the court for a single team at once.

For now, Banton is still a rotation player looking to earn more minutes. Not every game will have storybook moments like his debut. But if last night was any indication, it seems like Toronto’s found a new fan favourite in one of their own.