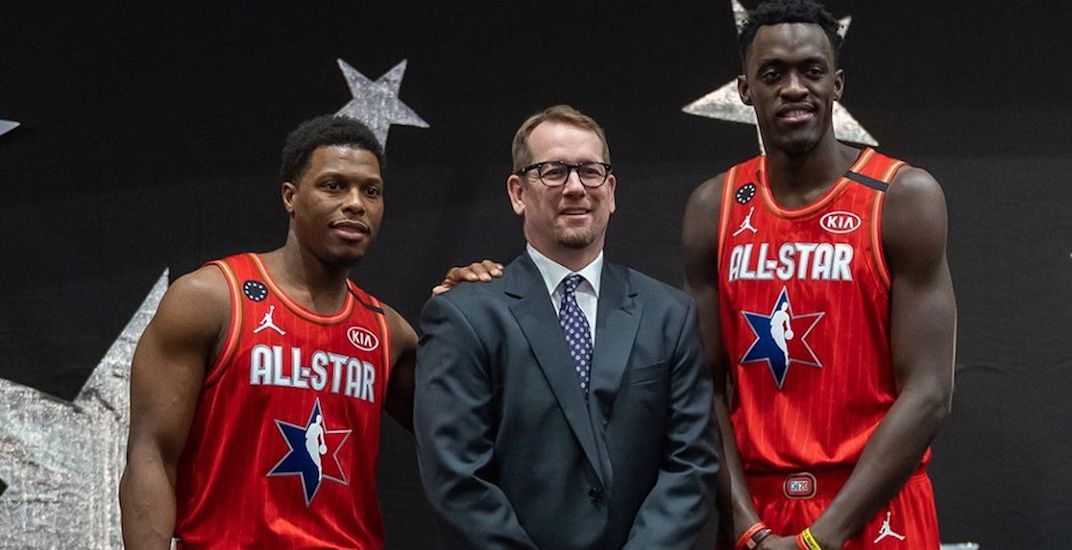 After celebrating the first NBA title in franchise history and losing their Finals MVP in free agency, this season could’ve easily been a write-off for the Toronto Raptors.

They could’ve suffered the dreaded championship hangover, moped about losing key players and struggled to stay a top team in the Eastern Conference.

But thanks to head coach Nick Nurse and his coaching staff, the exact opposite has happened. Under his leadership the Raptors are making people wonder if they can repeat as champions without Kawhi Leonard.

The Raptors sport a record of 40-15, placing them third overall in the league behind the Milwaukee Bucks (46-8) and Los Angeles Lakers (41-12), highlighted by a franchise-record 15-win streak.

With their win over Minnesota, the @Raptors now hold the record for LONGEST WIN STREAK by a Canadian-based professional sport franchise! 🇨🇦🔥

Offensively they’re third in three-point percentage (37.7%), fourth in team plus/minus (6.3), and have the fourth-best net rating (6.3) in the league.

Toronto has been able to accomplish all of this despite losing 185 man-games to injury this season, the fifth-most in the league. For comparison, the four teams ahead of them are all currently out of a playoff spot (Detroit Pistons, Washington Wizards, Portland Trail Blazers, and Golden State Warriors).

If that wasn’t enough, the Raptors were well-represented at the NBA All-Star Game with Nurse (and his coaching staff), Kyle Lowry, and Pascal Siakam participating as members of Team Giannis.

This is what Nurse does, he gets the most out of his players and wins basketball games.

In just over one and a half years as Raptors head coach, Nurse has put himself in some elite territory. With an overall coaching record of 98-39, he has the second-highest win percentage in history among NBA head coaches (.715) behind Golden State Warriors head coach Steve Kerr (.718).

When you look at what Nurse has been able to do compared to the other Coach of the Year contenders it’s hard not to vote for him.

Here’s a look at who his competition is:

In his first season as Lakers head coach, Frank Vogel has helped bring the team back as a championship contender.

It’s tricky getting used to a new team, but Vogel also has the luxury of coaching LeBron James and Anthony Davis.

The reigning Coach of the Year is making a compelling case to repeat this year.

In his second season as Bucks head coach, Mike Budenholzer has his going on a tear as the best team in the league. At 46-8 the Bucks are currently on pace to have one of the best regular seasons in NBA history.

The only issue is no coach has ever won back-to-back Coach of the Year awards.

After trading away Russell Westbrook and Paul George for a combined seven draft picks, no one expected the Thunder to be competitive this season, let alone sitting in a playoff spot.

At 33-22, Oklahoma City is sitting in the sixth seed in the Western Conference and don’t show signs of slowing down.

Under Billy Donovan’s leadership sophomore guard Shai Gilgeous-Alexander has flourished as the team’s leading scorer (19.5 points per game) and is thriving in the Thunder’s backcourt with Chris Paul.

The Miami Heat are another team in the East that are exceeding expectations. That’s largely thanks to the leadership of Erik Spoelstra, who is tied for the second longest-tenured head coach in the league.

After missing the playoffs last year, peopled expected the Heat to improve with the addition of Jimmy Butler, but not by this much.

The Heat are now the fourth-best team in the East (35-19) and have their eyes on closing the gap with the third-place Boston Celtics and second-place Raptors.

Despite his success as a two-time NBA champion, Spoelstra has never won Coach of the Year.