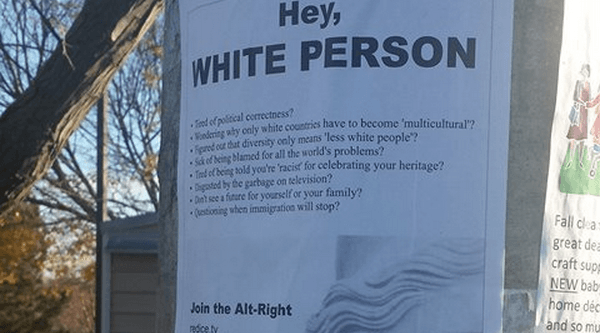 If anyone in Toronto is unsure of the effects of the U.S. election on life in Canada, this might be a sign.

The posters go on to ask, “Tired of political correctness? Wondering Why only white countries have to become ‘multicultural’? Figured out that diversity only means ‘less white people’? Sick of being blamed for all the world’s problems?” It goes on…

This photo was taken by a friend of mine in East York, Toronto, this morning. Canada is not immune. #canpoli #onpoli pic.twitter.com/YUwr7fuY5N

This hate is unacceptable in our City. Staff are removing the posters immediately and investigating who is responsible.

ABSOLUTELY HORRIFYING! We are a country of refugees and immigrants! We can’t let this happen here #stopkellieleitch #notmycanada https://t.co/p6tpIhWtut

Found in TORONTO you guys. Canada needs to get vigilant about fighting white supremacists NOW before it’s an election year. #NotMyCanada https://t.co/nH24oFklOi