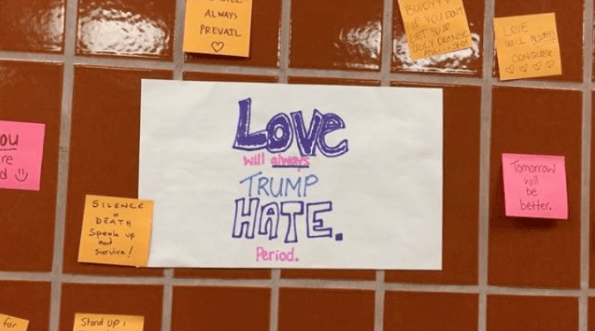 Whether you want to admit it or not, the American election results affect Canada.

So it shouldn’t come as a huge surprise that some people in Toronto are feeling scared after Donald Trump won. Especially given what we’re already seeing down south.

It also shouldn’t come as a surprise that Torontonians take care of each other. Case in point, Dundas West Station. Those who showed up to catch the TTC there yesterday saw an impromptu collection of messages spread across the platform wall intended to make people feel better.

These messages ranged from the  simple “You are beautiful” and “Tomorrow will be better” to the more blatant “Trump is a fat asshole” and “Trump is racist.”

Don’t be surprised if you see more quiet protests popping up around the city.