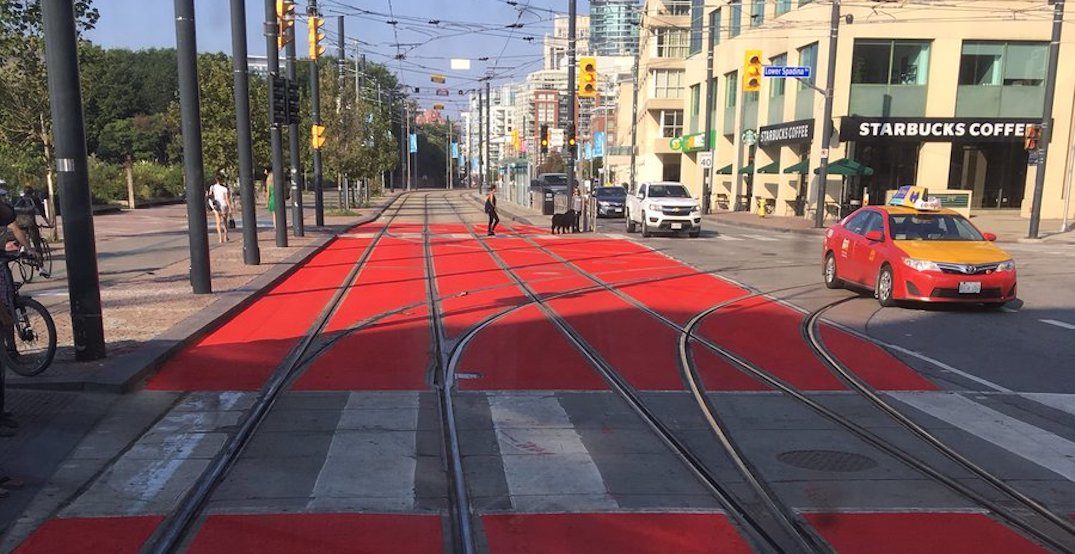 A portion of Queen’s Quay is looking a little red these days.

This week, the City of Toronto, along with the TTC and Waterfront Toronto, installed red markings along TTC tracks on Queen’s Quay.

According to the TTC, the project is about keeping the right of way clear for streetcars, but also it’s an additional way to “reduce incidents of motorist intrusion.”

Far too many confused motorists have been driving into the Queens Quay streetcar tunnel, and the TTC began taking steps to put a stop to it earlier this summer.

The TTC recently installed lights and bollards, and is also currently testing lift arms (gates) at the entrance to the tunnel at Queens Quay and York St to stop cars from entering.

The new paint is located on the streetcar tracks at the intersection of Lower Spadina and Queens Quay West.

The City says that at this point, “there has been no additional requests from TTC or Waterfront Toronto for other installations.”

Installation of two 10-foot safety gates at #TTC Queens Quay tunnel has started. Will be operational after testing and timing of streetcar transponders is complete in a couple of weeks. Lights and gates and bollards. No excuses for cars entering the tunnel! pic.twitter.com/FNKFzNEaZ4