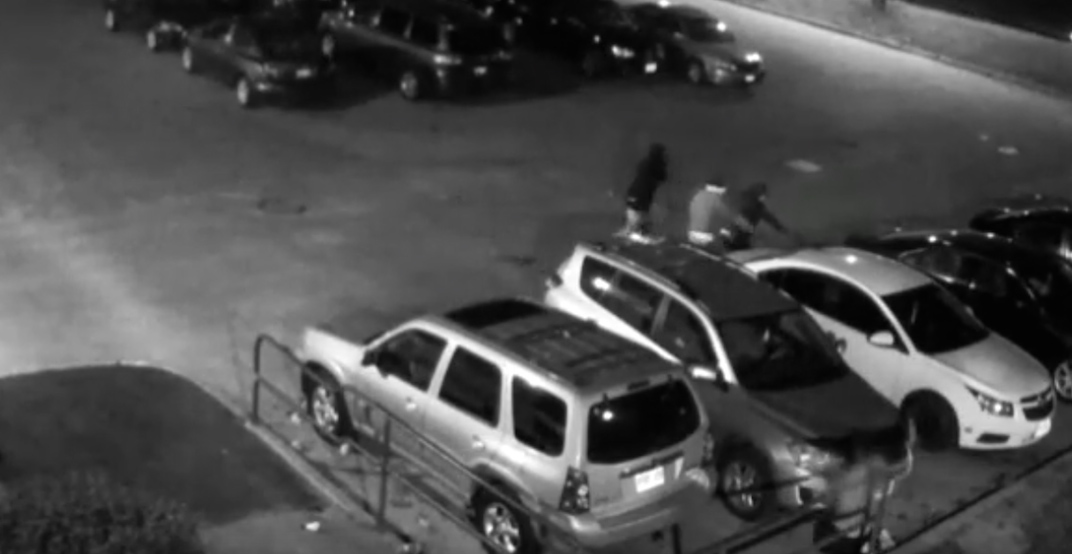 The Toronto police have requested the public’s assistance with an ongoing shooting investigation and have released surveillance videos from three separate shooting incidents that took place over the span of five months in the northwest end of the city.

According to police, the first shooting happened on June 10, when a group of people were approached by three masked men while in a parking lot in the area of Jane Street and Steeles Avenue West.

The masked men demanded cash and property from the group while holding them at gunpoint and going through their pockets.

During the incident, a 29-year-old was struck in the face with a gun, causing the weapon to discharge.

Police say the victim fell between two parked cars and the three suspects began emptying their guns, hitting him numerous times before fleeing the scene on foot.

The first suspect is described as being 5’10” to 6’0″, with a thin build. His face was covered with a light-coloured fabric and he wore a grey baseball hat with a light blue zipper jacket, light blue jeans and black shoes.

The second suspect is also described as being 5’10” to 6’0″ with a medium build. His face was also covered and he wore a black hoodie with the hood up, grey track pants and black shoes.

The third suspect is described as being 5’11” to 6’1″ with a thin build. His face was also covered and he wore a dark blue hoodie with the hood up, black pants and black shoes.

The second incident occurred on August 30, when a group of people were in front of a home in the area of John Garland Boulevard and Martin Grove Road when two unknown men approached the group carrying firearms.

Shots were fired and a then 20-year-old man was shot and suffered non-life threatening injuries.

The third shooting occurred on October 30 in the area of Jamestown Crescent and John Garland Boulevard.

Police say a group of people were walking in the area when they were approached from behind by two suspects wearing masks. The suspects began shooting at the group.

A description for one of the suspect has been released and is described as being 6’0″ tall with a skinny build. He was wearing a grey hooded sweatshirt with a logo on the front, black track pants with white stripes down the sides, black shoes and a baseball hat.

Anyone with information on any of these shootings is asked to contact police or Crime Stoppers.