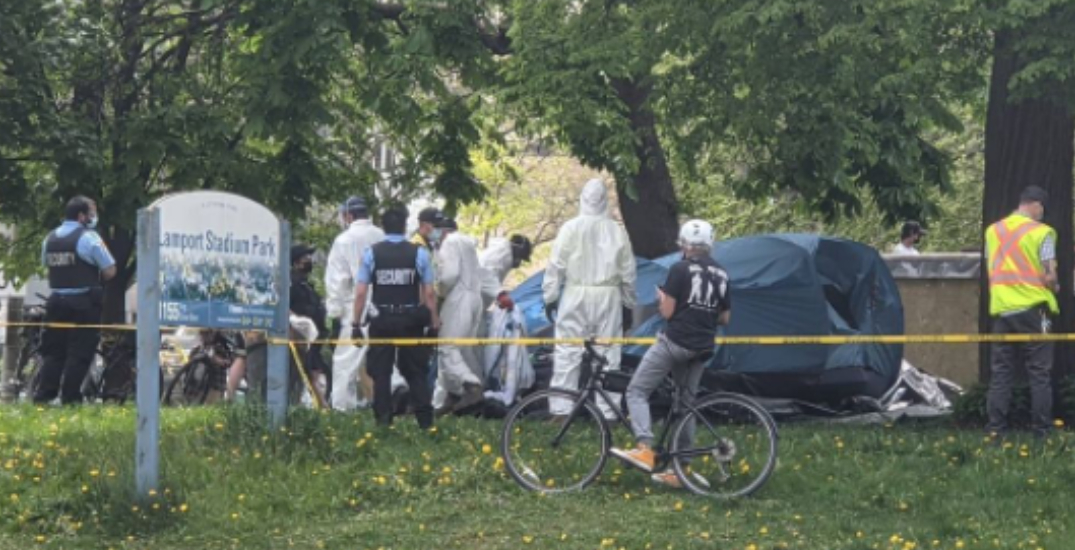 One person was arrested and three officers injured as officials dismantled a homeless encampment at Lamport Stadium on May 19.

Media relations officer Jenifferjit Sidhu confirmed to Daily Hive that one person was arrested and charged for assaulting a police officer, and two people received tickets for trespassing.

Three officers were injured, one of whom had to be treated in hospital for minor injuries, she said.

Sidhu stated that although the City is responsible for shelter and housing, police were asked to support “as a last resort.”

A bulldozer can be seen removing at least one wooden shelter, and a worker in a hazmat suit is pictured taking items out of a tent.

At a press conference on Wednesday afternoon, Toronto Mayor John Tory said that in addition to the 15 residents of the encampment, “many more people” had materialized when officials arrived.

The mayor defended officials’ actions, noting that residents had been given “plenty of notice” to vacate the area.

Tory revealed that outreach workers have visited the Lamport Stadium encampment 107 times in 2021 to offer “safe, indoor housing” to residents.

It was also the site of a recent fire, he said, which nearly resulted in the death of a resident.

“There does come a time when we have to take some action in this regard and establish that we cannot have people living continuously in unsafe, unhealthy, and illegal circumstances in our public parks,” Tory said.