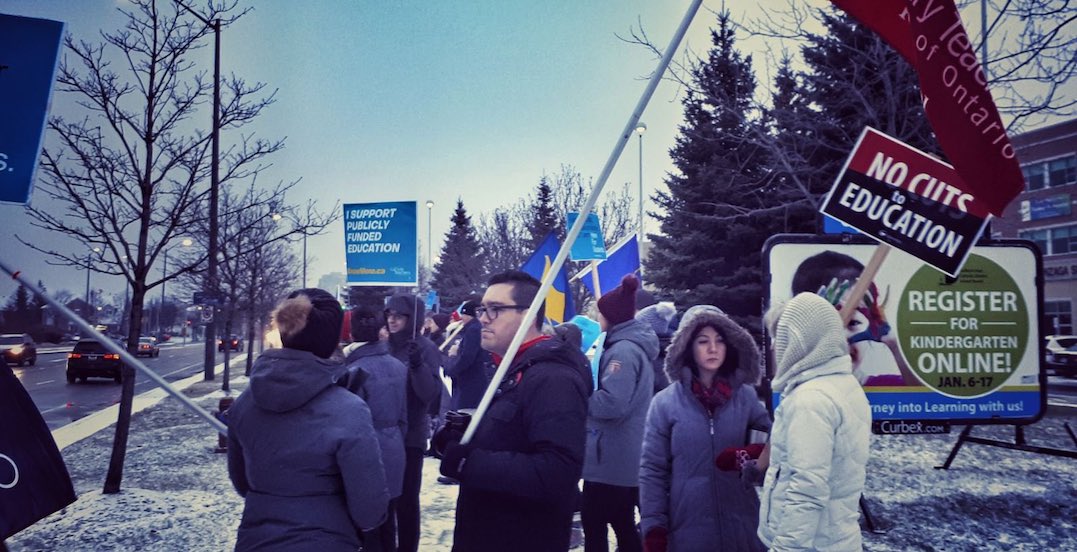 The battle over classroom sizes in the province rages on as it was announced on Wednesday that there will be another strike day for Ontario’s public school teachers next week.

The Elementary Teachers’ Federation of Ontario (ETFO), who represent public school teachers and education workers in the province, has announced the plans, which will go ahead if no deal is reached by Friday.

On Monday, January 20, members in Toronto, York Region, and Ottawa-Carleton school boards will take part in another one-day “full withdrawal of services.”

“Other than cuts to education, Ford’s Education Minister Stephen Lecce has refused to give his negotiators a mandate to discuss the substantive issues we know are important for students and education workers,” said ETFO President Sam Hammond in a release.

“Unless the government makes an immediate effort to engage in serious talks, we will have no option but to further escalate our strike action. As of today, Minister Lecce has established no dates for contract talks.”

The move is mainly due to the union’s objection over increases in class sizes by the Province.

According to the release, there is still no mandate to discuss that issue, alongside the topics of more resources for students with special needs; protection of Ontario’s “world-renowned” Kindergarten program; reduction of violent incidents; and fair compensation for educators, particularly occasional teachers, early childhood educators, professional support personnel and education support personnel.

“The public education that our students need and deserve cannot be hijacked by a government whose only aim to date has been to make funding cuts,” said Hammond.

“We want this government to invest in public education and the future of Ontario’s students.”

In November, 98% of the group’s members gave their union a strong mandate for central strike action should it be needed during the ongoing negotiations.

Meanwhile, Education Minister Stephen Lecce announced on Wednesday that the government of Ontario will offer parents a payout of $25 to $60 if strike action closes schools or school-based child care centres.

He previously stated that the continued strike action is unfair to students, and said the provincial government has been trying to reason with the teachers’ union.

With files from Ainsley Smith and Peter Smith.