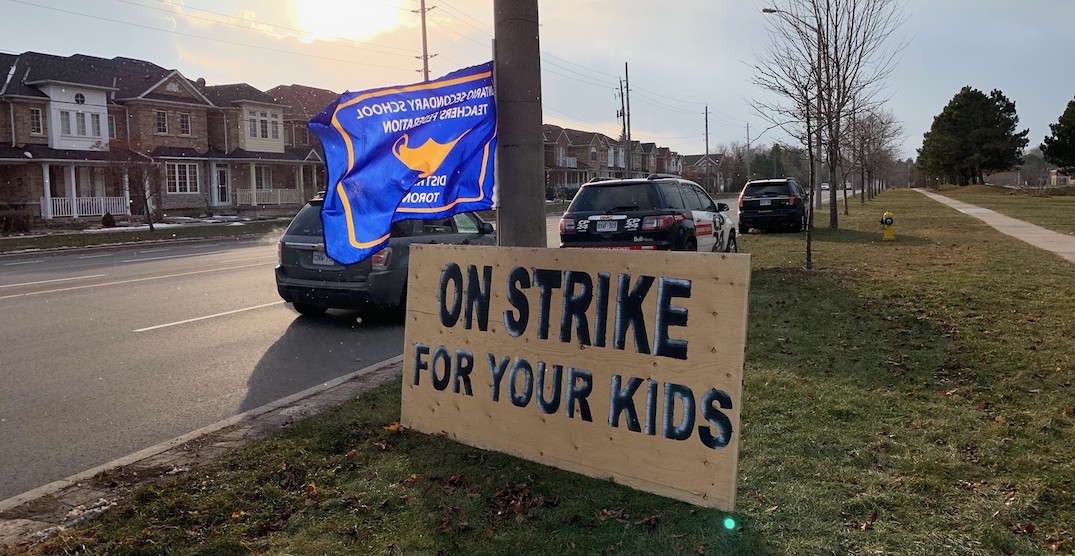 The battle over classroom sizes in the province continues to rage as it was announced on Friday that there will be another strike day for Ontario’s secondary school teachers next week.

According to the Ontario Secondary School Teachers’ Federation (OSSTF/FEESO), who represent high school teachers and education workers in the province, on Wednesday, January 15, members in certain school boards will take part in another one-day, “full withdrawal of services.”

On the same day, other OSSTF/FEESO members in other school boards will hold information pickets in front of schools, at MPPs’ offices, and in other locations throughout the entire province.

According to the OSSTF/FEESO, members employed by the following school boards will fully withdraw services for all of Wednesday:

The move is mainly due to the union’s objection over increases in class sizes by the Province. OSSTF members held a similar action on January 8 and the work-to-rule action officially began on November 26, 2019, after 95% of the group’s membership voted in favour of strike action.

“The Minister of Education continues to peddle the false narrative that this dispute is about compensation,” said OSSTF/FEESO President Harvey Bischof in a release. “And yet, when we offered to call off our most recent job action in exchange for class size and staffing guarantees — issues entirely unrelated to compensation — the Ford government chose to reject that offer rather than keep students in classrooms.

“It’s time for the Ford government to come to the table with meaningful responses to our proposals so that we can work toward a deal that protects the quality of education in Ontario.”

“For the fifth time, OSSTF union leaders have directed their members to not show up to class,” the Ministry of Education wrote in a statement sent to Daily Hive. “These union leaders will forcefully advocate for the interests of their members – from higher wages to enhanced entitlements — however they ought not oppose the academic aspirations of our students.

“Students should be in class. It is most concerning that teacher unions leaders disagree and continue to impede learning for the next generation. Our government is focused on landing deals that keep students in class so that we end the frustrating experience families face due to predictable union escalation.”

“Withdrawing services hurts students the most, and the union leaders know it,” read the caption, accompanied by an image of the minister.

Withdrawing services hurts students the most, and the union leaders know it. #StrikesHurtKids #onpoli pic.twitter.com/02YWS5Crbj

Lecce previously stated that the continued strike action is unfair to students.

He said the provincial government has been trying to reason with the teachers’ union and made the offer of reducing classroom sizes from 28 to 25 and online learning courses from four to two.

With files from Ainsley Smith and Kayla Gladysz.

This article was updated to include comments from the Ontario Ministry of Education.