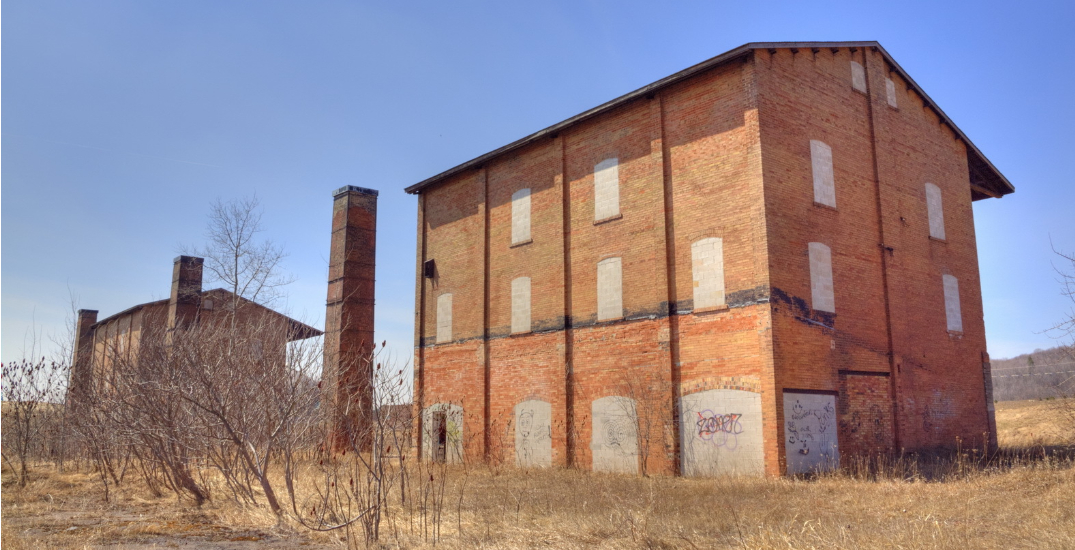 If you’re looking for a fall activity that’s a little more macabre than just watching the leaves change, look no further than one of Ontario’s many ghost towns.

From abandoned factories to long-forgotten villages, there is no shortage of spooky sites to explore this fall.

Below, check out five ghost towns near Toronto that are perfect for a ghostly getaway.

According to Inside Caledon, the Cheltenham Brickworks were operated by the Interprovincial Brick Company from 1914 until 1958.

An “important economic stimulant” for the local community, many workers lived on-site in a village established by Interprovincial.

When operations ceased, the site was taken over by a paper company, which reportedly demolished worker’s homes.

Though largely reclaimed by nature, the original Cheltenham Brickworks buildings still stand, serving as a ghostly memory of the once successful operation.

At its peak in the 19th century, the small community of Allan’s Mill boasted a general store, shoemaker, and two blacksmiths, in addition to several saw and grist mills.

Ontario Ghost Towns writes that business began to wane by the late 1890s as timber supplies dwindled and farmers transitioned from wheat to dairy.

Today, the town remains “relatively intact.” The general store, a blacksmith shop, and one of the original homes are still standing. The town cemetery also “sees the occasional burial.”

Two mills are intact as well but located on private property.

Established in 1801, Crook’s Hollow was an industrial pioneer town located in modern-day Hamilton, according to the city’s conservation authority.

The town was established by James Crooks, who built the area’s first grist mill. By 1829, it had a distillery, two factories, multiple mills, a general store, an inn, and worker’s homes.

The original mill operated until 1934 when it was destroyed by a fire. The ghost town’s ruins can be explored today via a nature trail.

Another town built on milling, Ballycroy, was established in 1826. Within 50 years, it was a booming community with a population close to 200.

In addition to its multiple mills, Ballycroy included two general stores, a law office, four taverns/hotels, and a liquor store.

According to Ontario Ghost Towns, the latter establishments gave the town an “infamous reputation” for drunken brawls that reportedly lasted for days.

A series of misfortunes, including being bypassed by the railroad and a deadly fire, led to the town’s eventual fall from grace.

Many of Ballycroy’s original homes still stand—and are inhabited—as do the general store and post office.

The Ontario Government established Falkenburg, near Muskoka, in the hopes of luring settlers to the area, writes Ontario Abandoned Places.

By 1863, the town had a post office, a church, several mills, and two hotels to accommodate travellers on their way, via stagecoach, to Bracebridge.

When the railway came through, a station was established a few kilometres south of Falkenburg. But, with fewer stagecoaches passing through, the town’s importance dwindled, and a new settlement popped up around the new station instead.

The remains of the original town of Falkenburg, which include a mill, a cemetery, and a school, can be found just north of the neighbourhood of Falkenburg Station in Bracebridge.

Where: Near Manitoba Street and Moore Road, Bracebridge.