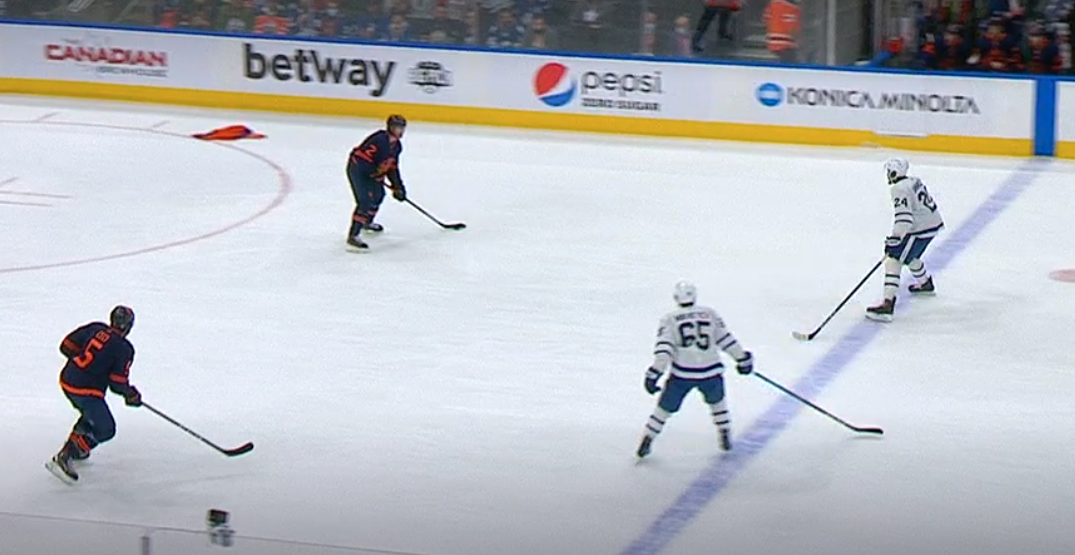 One Edmonton Oilers fan exited Rogers Place on Tuesday with one less jersey than they entered with.

Down 5-1 against the Toronto Maple Leafs with under two minutes left in the third period, an Oilers jersey made its way to the ice during the action.

After jersey tosses in Montreal, Vancouver, and Toronto already this season, Edmonton is now the fourth Canadian team to see team merchandise on the ice during a game.

An Oilers jersey was thrown on the ice tonight in Edmonton. 😳 pic.twitter.com/IAIl0IusQs

The Oilers have now lost six games in a row, including five straight on home ice. Dating back to 2016-17, Edmonton has lost nine of their last ten games at Rogers Place against Toronto, with their lone win coming in overtime during last year’s North Division.

someone just threw an oilers jersey on the ice in edmonton *while the game was going on* pic.twitter.com/KNhht9Fnzr

“I didn’t see that,” Edmonton forward Colton Sceviour said when asked about the jersey toss. “It’s unfortunate, the fans are frustrated.”

The Oilers are now 16-11-0 on the season, and are sitting in the second Wild Card spot while being fourth in the Pacific Division. But they’re just one point up on both the San Jose Sharks and Winnipeg Jets, with the team’s 9-1 start now a distant memory at this point.

Despite the team’s slide, Sceviour said he’s confident the Oilers will “get out” from their slump.

“Maybe that fan will have to buy a new jersey [then],” Sceviour added.