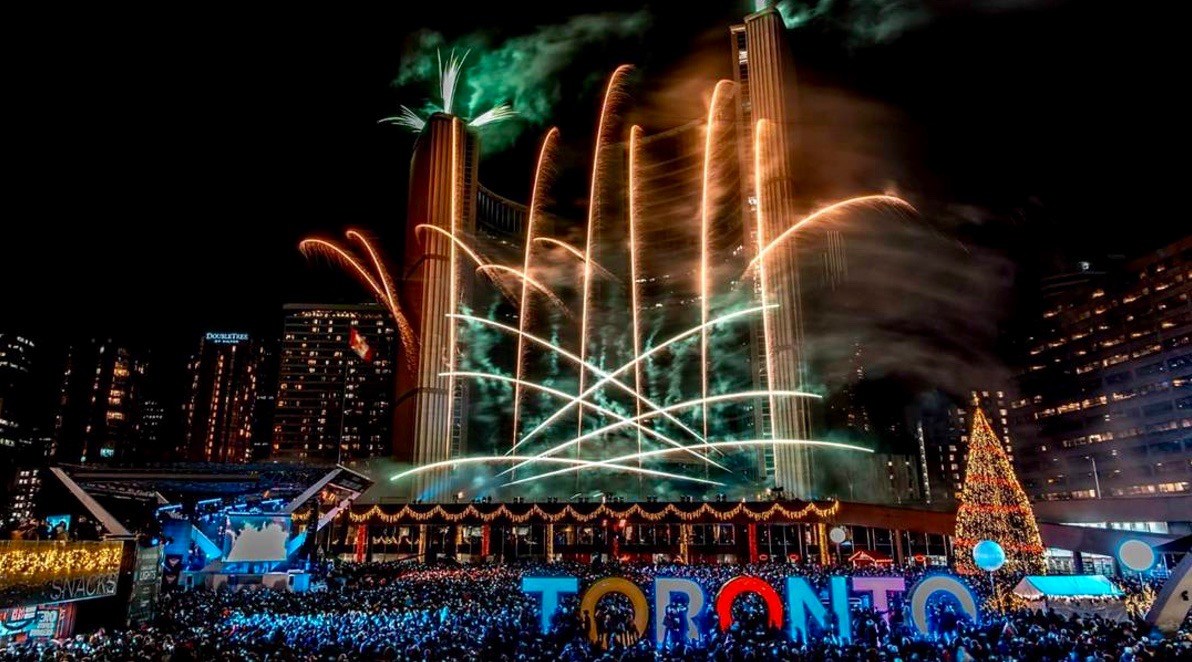 Kick off this Saturday with some hockey, before getting into the New Year celebrations. Lots of different events happening this big night, so be sure to get out there! Enjoy the wonderful evening, and be sure to take transit (it’s free!).

Not A New Years Eve Party

No cover charges, line ups, noisemakers or champagne! Just some of the best beers available from local breweries.

Where: Lansdowne Brewery, 303 Lansdowne Street
When: December 31 at 4 pm

If you’re looking to get dressed to the nines and to spend the evening at a big, fancy party, consider this extravagant ball at the Royal York. Taking place inside the Fairmont’s magnificent Concert Hall, Ball room, and Canadian Room, this event will leave you feeling like royalty – if only for just one night.

Empire Comedy Live presents a fun ensemble stand up show to help you close out 2016 on a high note.

Don’t feel like hitting a bar but still want to ring in the new year with fellow Torontonians? Head to the heart of downtown Toronto and celebrate the New Year at Nathan Phillips Square. Guests can enjoy live music, skating, fireworks, and plenty of fun. Check out the full details for the evening here!

Count down to the New Year with the whole family at DJ Skate Nights: A NYE Ice Skating Jam Named Saturdays, as DJ P-Plus serves up the hottest hits.

Unleash your inner James Bond and enjoy an evening of casino-style fun, party favours, food, and plenty of cocktails.

3HO Toronto, Lotus Yoga Centre, & the Toronto Kundalini Yoga Teachers invite you to join this New Year’s Eve at The Ashram in celebration of the coming year of 2017. Come expand your blissful spirit with community. There will be yoga, dancing, and food.

For one night only, Toronto’s Gladstone Hotel will transform into the exotic dreamland of the Moulin Rouge, complete with live music, burlesque performances, and a champagne toast at midnight.

Retro NYE with The Dreamboats

The fabulous Dreamboats return for another new years eve party to keep you dancing while serving $4 Sparkling to quench your thirst. Playing all of your favourite retro pop and rock tunes ALL NIGHT LONG!

This party is for you if you don’t want to line up outside a club for hours and slip the bouncer $40 to get in but you also don’t want to slug beers in your friend’s basement all night. Unpretentious New Year’s is your chance to turn up for cheap. Dress however you want. Bring whoever you want. Arrive whenever you want. FREE entry.

Boat your way into the new year. Join the Stella Borealis Cruise Ship and have a unique experience like no other. With multiple cash bars, a live DJ, and music on two enclosed and heated yacht’s decks, this event will be just the way to do something truly exciting and utterly unique this coming holiday.

Where: Stella Borealis, 333 Lakeshore Blvd East
When: December 31 at 9 pm

Put on your dancing shoes and get ready to go back in time for this hot NYE event. At Big Sound New Year’s you’ll be able to ring in the new year as you boogie the night away to a Soul and Motown orchestra.

Ring in the new year at a gig! If you’re a Horseshoe Tavern regular, you’re sure to see some familiar faces at this annual New Year’s Eve soiree with Toronto’s The Sadies.

Where: The Horseshoe Tavern, 370 Queen Street West
When: December 31 at 9 pm

Cheers to a hassle-free New Year’s Eve! Dance the night away with local favourites “The Clearing”, enjoy a beer paired dinner menu, and say goodbye to a bleak 2016 with sparkling wine at midnight.No cover, no tickets, but reservations are needed so check out the event for details.

Ring in the New Year with #ROMNYE, and dance the night away while enjoying delectable bites, and drinks. Celebrate with special access to our spectacular exhibition CHIHULY, live bands, DJs, and, of course, a sparkling toast at midnight.

Where: Royal Ontario Museum, 100 Queens Park
When: December 31 at 9 pm

Rub shoulders with some of Toronto’s elite as you dance the night away. The party will include hors d’oeuvres, party favours, lobby bar and rooftop lounge access, entertainment and a midnight toast. There will be a dress code in effect so make sure you dress to impress.

Where: Thompson Hotel, 550 Wellington Street West
When: December 31 at 9 pm

This swanky lakeside gala is sure to be an event you won’t forget. Palais Royale overlooks Lake Ontario and has a ballroom which will host Klassik and Live Percussion by Soraya Lozano.

Amsterdam Brewery will be transformed into a carnival-themed New Year’s event complete with DJs, acrobats, magicians, illusionists and other carnival performances. It’s a 14,000 square foot event space with a two-storey midnight balloon drop.

Where: Amsterdam BrewHouse, 245 Queens Quay
When: December 31 at 9 pm

The fifth annual Dude’s New Year’s event featuring The Big Lebowski is back! The Dude, Walter, Donny and the gang are back for another round of White Russians, Creedence and unforgettable hijinks. Hundreds of “Little Achievers” will ring in the New Year in style (sunglasses and bathrobes recommended).

90’s lovers rejoice: It’s time to take a walk down memory lane and get nostalgic as Back In The Day NYE will be paying tribute to Old School Hip Hop, R&B, Dance, House, Reggae, & Pop from the 90’s.

Run or walk in the cool Liberty Village neighbourhood with super views of the Toronto Skyline. Accurate chip timed 5k, $10 Winter Gloves or Toque with Every Registration, Post Race Food, on course fireworks, $30 swag bag, stylish and unique finishers’ medal. Free glass of bubbly or Steam Whistle Beer to all finishers to celebrate your race and of course the New Year.

Where: Liberty Village, King Street West
When: December 31 at 10:30 pm